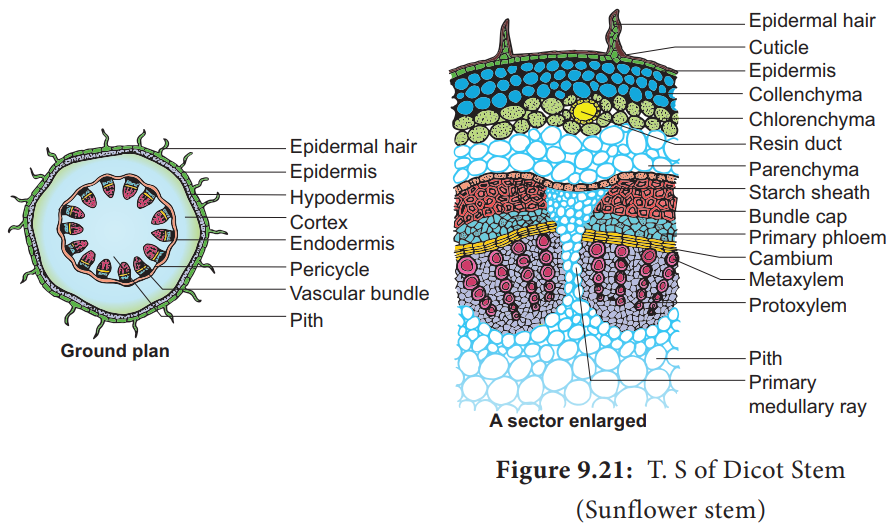 It is protective in function and forms the outermost layer of the stem. It is a single layer of parenchymatous rectangular cells. The cells are compactly arranged without intercellular spaces. The outer walls of epidermal cells have a layer called cuticle. The cuticle checks the transpiration. The cuticle is made up of waxy substance known as cutin. Stomata may be present here and there. Epidermal cells are living. Chloroplasts are usually absent. A large number of multicellular hairs occur on the epidermis.

Cortex lies below the epidermis. The cortex is differentiated into three zones. Below the epidermis, there are few layers of collenchyma cells. This zone is called hypodermis. It gives mechanical strength of the Stem. These cells are living and thickened at the corners.

Inner to the hypodermis, a few layers of collenchyma cells are present. This zone is called hypodermis. It gives mechanical strength to the stem. These cells are living and thickened at the corners. Inner to the hypodermis, a few layers of chlorenchyma cells are present with conspicuous intercellular spaces. This region performs photosynthesis. Some resin ducts also occur here. The third zone is made up of parenchyma cells. These cells store food materials. The innermost layer of the cortex is called endodermis. The cells of this layer are barrel shaped and arrange compactly without intercellular spaces. Since starch grains are abundant in these cells, this layer is also known a starch sheath. This layer is morphologically homologous to the endodermis found in the root. In most of the dicot stems, endodermis with casparian strips is not developed.

The central part of the stem inner to the endodermis is known as stele. It consists of pericyle, vascular bundles and pith. In dicot stem, vascular bundles are arranged in a ring around the pith. This type of stele is called eustele. 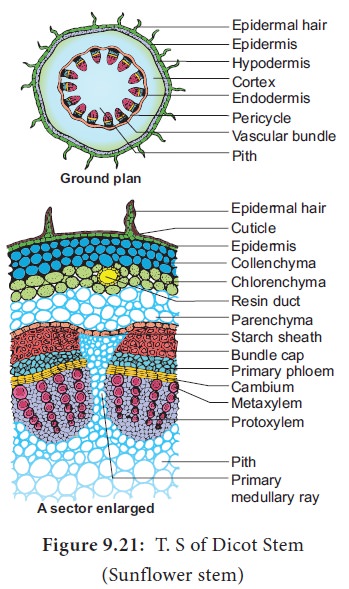 Cambium consists of brick shaped and thin walled meristematic cells. It is one to four layers in thickness. These cells are capable of forming new cells during secondary growth.

Xylem consists of xylem fibres, xylem parrenchyma vessels and tracheids. Vessels are thick walled and arranged in a few rows.

Xylem conducts water and minerals from the root to the other parts of the plant body.

The large central portion of the stem is called pith. It is composed of parenchyma cells with intercellular spaces. The pith is also known as medulla. The pith extends between the vascular bundles. These extensions of the pith between the vascular bundles are called primary pith rays or primary medullary rays. Function of the pith is storage of food.