Epidermal tissue system is the outer most covering of plants.

Epidermal tissue system is the outer most covering of plants. It is in direct contact with external environment. It consists of epidermis derived from protoderm. Epidermis is derived from two Greek words, namely ‘Epi’ and ‘Derma’. ‘Epi’ means upon and ‘Derma’ means skin. Although epidermis is a continuous outer layer, it is interrupted by stomata in many plants.

The outer layer of the root is known as piliferous layer or epiblema. It is made up of single layer of parenchyma cells which are arranged compactly without intercellular spaces. It is devoid of epidermal pores and cuticle. Root hair is always single celled, it absorbs water and mineral salts from the soil. The another important function of piliferous layer is protection.

It is protective in function and forms the outermost layer of the stem. It is a single layer of parenchymatous rectangular cells. The cells are compactly arranged without intercellular cells. The outer walls of epidermal cells have a layer called cuticle. The cuticle checks transpiration . The cuticle is made up of cutin. In many plants it is also mixed wax to form epicuticular wax. Epidermal pores may be present here and there. Epidermal cells are living. Chloroplasts are usually absent except in guard cells of stomata. In many plants a large number of epidermal hairs occur on the epidermis. 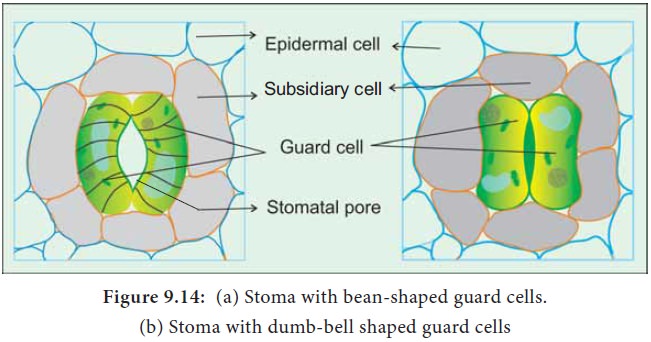 Some cells of upper epidermis (Example: Grasses) are larger and thin walled. They are called bulliform cells or motor cells. These cells are helpful for the rolling and unrolling of the leaf according to the weather change. Some of the epidermal cells of the grasses are filled with silica. They are called silica cells.

In some Xerophytic plants (Examples: Cycas, Nerium), stomata is sunken beneath the abaxial leaf surface within stomatal crypts. The sunken stomata reduce water loss by transpiration.

In Ficus upper epidermal layer contains cystoliths made up of calcium carbonate crystals. 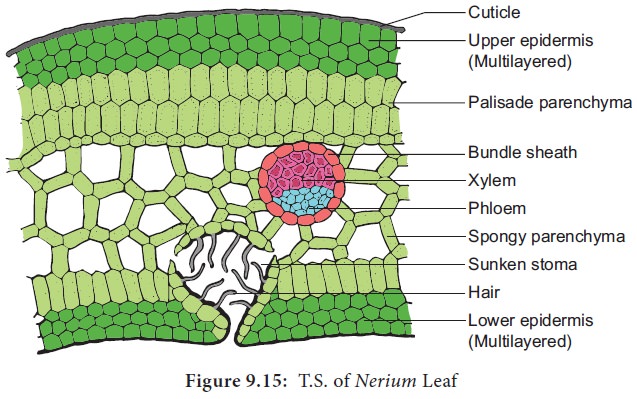 In Nerium , in the multilayered epidermis the outer layer alone is cutinized.

There are many types of epidermal outgrowths in stems. The unicellular or multicellular appendages that originate from the epidermal cells are called trichomes.

Trichomes may be branched or unbranched and are one or more one celled thick. They assume many shapes and sizes. They may also be glandular (Example: Rose, Ocimum) or non-glandular.

Piliferous layer of the root has two types of epidermal cells, long cells and short cells. The short cells are called trichoblasts.

Trichoblasts are elongate into root hairs. Epidermal hairs can also be in the form of stellate hairs (star shaped) present in plants. Example: styrax, many members of Malvaceae and Solanaceae. 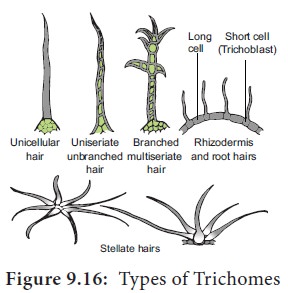 Prickles, are one type of epidermal emergences with no vascular supply. They are stiff and sharp in appearance. (Example: Rose).

1.           This system in the shoot checks excessive loss of water due to the presence of cuticle.

3.           Stomata is involved in transpiration and gaseous exchange.

4.           Trichomes are also helpful in the dispersal of seeds and fruits, and provide protection against animals.