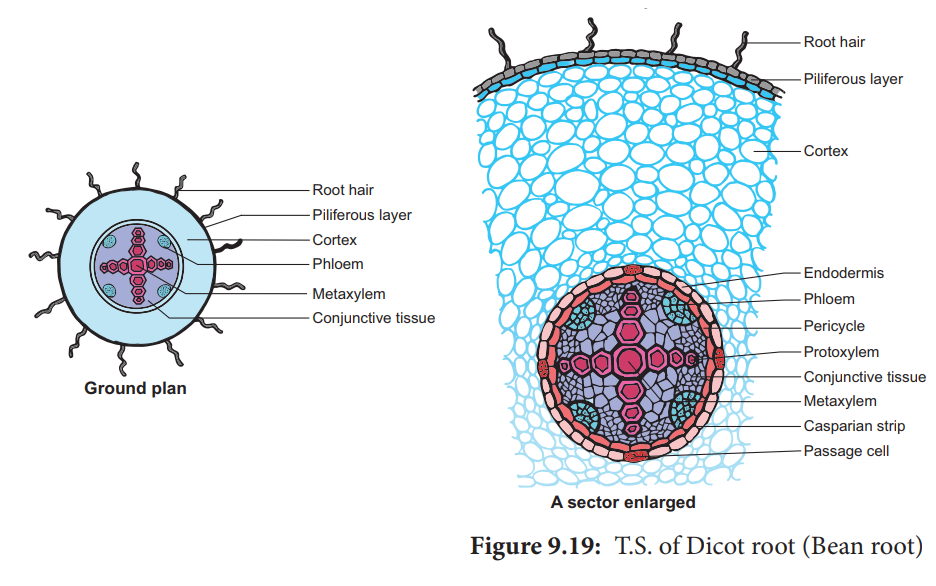 Anatomy of Dicot and Monocot Roots

In different parts of the plants, the various tissues are distributed in characteristic patterns. This is best understood by studying their internal structure by cutting sections (transverse or longitudinal or both) of the part to be studied.

The outermost layer of the root is called piliferous layer or epiblema. It is made up of single layer of parenchyma cells which are arranged compactly without intercellular spaces. It is devoid of epidermal pores and cuticle. It possesses root hairs which are single celled. It absorbs water and mineral salts from the soil. The chief function of piliferous layer is protection.

Cortex consists of only parenchyma cells. These cells are loosely arranged with intercellular spaces to make gaseous exchange easier. These cells may store food reserves. The cells are oval or rounded in shape. Sometimes they are polygonal due to mutual pressure. Though chloroplasts are absent in the cortical cells, starch grain are stored in them. The cells also possess leucoplasts. The innermost layer of the cortex is endodermis. Endodermis is made up of single layer of barrel shaped parenchymatous cells. Stele is completely surrounded by endodermis. The radial and the inner tangential walls of endodermal cells are thickened with suberin and lignin. This thickening was first noted by Robert Casparay in 1965. So these thickenings are called casparian strips. But these casparian strips are absent in the endodermis cells which are located opposite the protoxylem elements. These thin-walled cells without casparian strips are called passage cells through which water and mineral salts are conducted from the cortex to the xylem elements. Water cannot pass through other endodermal cells due to the presence of casparian thickenings.

Pericycle is generally a single layer of parenchymatous cells found inner to the endodermis. It is the outermost layer of the stele. Lateral roots originate from the pericycle. Thus, the lateral roots are endogenous in origin.

Vascular tissues are in radial arrangement. The tissue by which xylem and phloem are separated is called conjunctive tissue. In bean, the conjuctive tissue is composed of parenchyma tissue. Xylem is in exarch condition. The number of protoxylem points is four and so the xylem is called tetrach. Each phloem patch consists of sieve tubes, companion cells and phloem parenchyma. Metaxylem vessels are generally polygonal in shape. But in monocot roots they are circular. 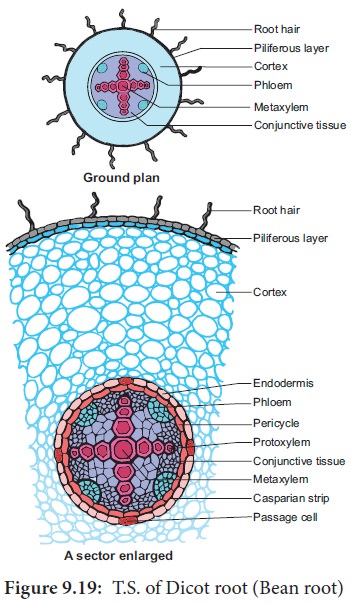 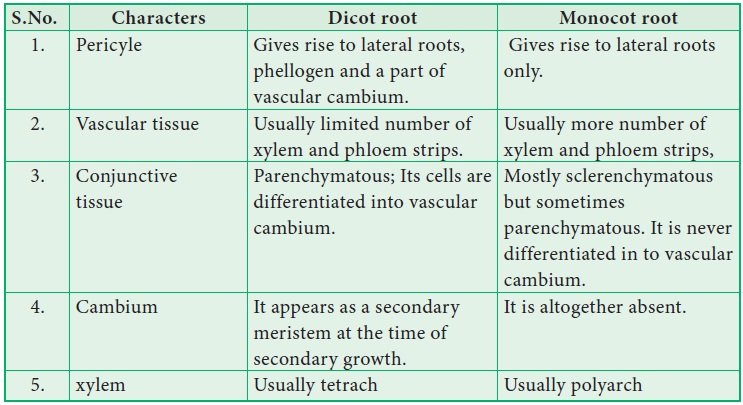