Characteristics and classification of meristematic tissues, Theories of Meristem Organization and Function

The characters of meristematic tissues:

·        The meristematic cells are isodiametric and they may be, oval, spherical or polygonal in shape.

·        They have generally dense cytoplasm with prominent nucleus.

·        Generally the vacuoles in them are either small or absent.

·        Their cell wall is thin, elastic and essentially made up of cellulose.

Meristem has been classified into several types on the basis of position, origin, function and division. 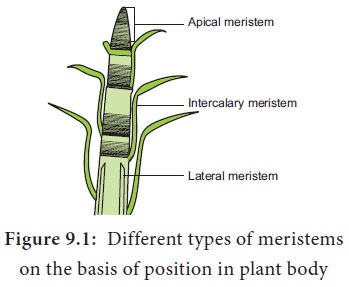 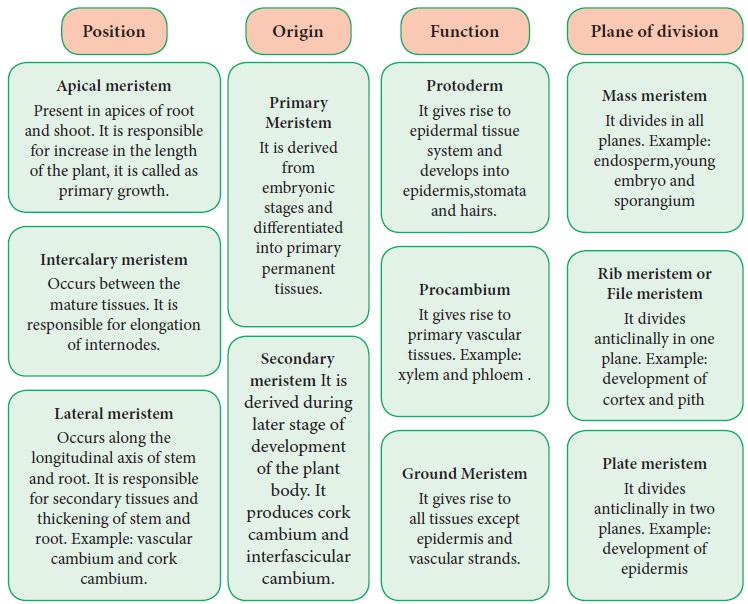 Theories of Meristem Organization and Function

Many anatomists illustrated the root and shoot apical meristems on the basis ofnumberandarrangementandaccordingly proposed the following theories – An extract of which are discussed below.

Apical cell theory is proposed by Hofmeister (1852) and supported by Nageli (1859). A single apical cell is the structural and functional unit.

This apical cell governs the growth and development of whole plant body. It is applicable in Algae, Bryophytes and in some Pteridophytes.

Tunica corpus theory is proposed by A. Schmidt (1924).

Two zones of tissues are found in apical meristem.

Root apex is present opposite to the shoot apex. The roots contain root cap at their apices and the apical meristem is present below the root cap.

The different theories proposed to explain root apical meristem organization is given below.

Apical cell theory is proposed by Nageli. The single apical cell or apical initial composes the root meristem. The apical initial is tetrahedral in shape and produces root cap from one side. The remaining three sides produce epidermis, cortex and vascular tissues. It is found in vascular cryptogams.

Histogen theory is proposed by Hanstein (1868) and supported by Strassburgur. The histogen theory as appilied to the root apical meristem speaks of four histogen in the meristem. They are respectively

Korper kappe theory is proposed by Schuepp. There are two zones in root apex – Korper and Kappe

2.           Kappe zone forms the cap. This theory is equivalent to tunica corpus theory of shoot apex.The two divisions are distinguished by the type of T (also called Y divisions). Korper is characterised by inverted T divisions and kappe by straight T divisions.

Quiescent centre concept was proposed by Clowes (1961) to explain root apical meristem activity. These centre is located between root cap and differentiating cells of the roots. The apparently inactive region of cells in root promeristem is called quiescent centre. It is the site of hormone synthesis and also the ultimate source of all meristematic cells of the meristem.