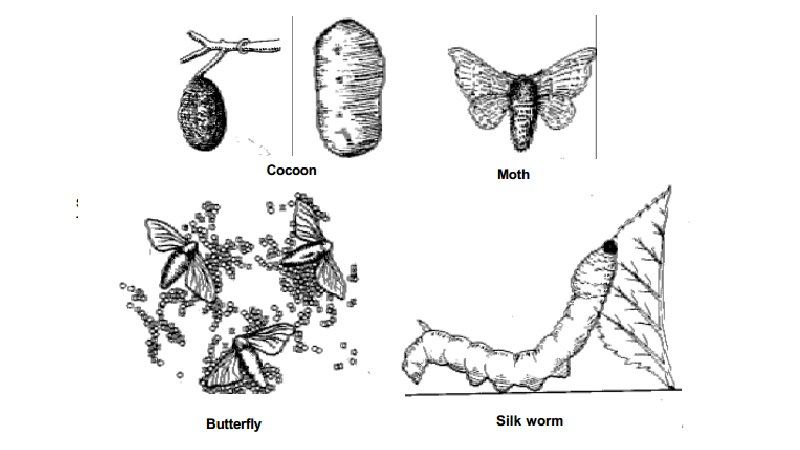 Natural protein fibers are obtained from animal sources like hair and other secretion, fibers include covering from such animals as sheep, mohair goat, cashmere goat and camel. Secretions are obtained from the larva, or worm stage, of the silkworm, which spins the cocoon from which silk fibers are obtained and from the spider which spins fine fibers in making its web. There are some properties of hair fibers and secretions which are quite similar and on the other hand there are properties which are totally different.

In old English, silk was sioloc. The name is thought to have originated from the Greek 'Seres', meaning the people from Eastern Asia, namely the Chinese.

Silk is very fine strand of fiber that is a solidified protein secretion produced by certain caterpillars to encase themselves in the form of cocoon.

The possibility of making cloth from the filament that the silkworm spins into a cocoon was first discovered in China about 2600 B.C. Legends tells us that a cocoon accidently dropped into a cup of tea that a Chinese Princess was having in her garden. The hot liquid softened and loosened the fiber, which the princess pulled and drew away from the cocoon as a continuous strand. Another story cites Empress Si-ling-chi as the first producer of silk fiber, from which she made a silk robe for her husband. From antiquity until the more recent establishment of the Chinese Republic, she was venerated as the Goddess of the Silkworm.

The Chinese who first cultivated the silkworm and developed a silk industry endeavored to keep the source of the raw material secret. Their silk fabrics were highly priced. Caravans carried silk into the Near East where they were traded for hundreds of years. About three thousand years after its original discovery the secret was stolen out of China.

b. Sericulture (Growth and Production):

Sericulture, the production of the worms, their development and the spinning of cocoon is largely a home industry. In the modern scientific industry the tiny eggs or seeds are deposited by the carefully bred female moth on cards or strips of cloth.The cards are stored in racks in a cool dry place until the incubation of a new crop of silkworms is desired. The cards are distributed to the peasants and the eggs are incubated by wild warmth: the eggs may be covered with blanket, or the cards may be worn under the clothing and the tiny ants or silkworms or hatches. The young ants are provided with shredded, fresh, tender mulberry leaves (morus alba). The leaves to which the worms cling are lifted to the feeding trays. The weak worms are discarded. The worms are kept in a room at a uniform temperature, they are fed five or six times a day, the trays are kept clean.

The ants are initially about 3 mm long. During this growth the worms sheds its skin four times at about 5-days intervals and after the fourth shedding it develops for about 10 days more. The fully grown worm is 8 to 9 cm in length and has increased its weight by 1000 fold to 5 gms.

The fully developed worm has a total life period of approximately one month. It first learns to eat and begin to seek something on which to spin its cocoon. This worm is then transferred to a wooden frame containing twigs or straws, on which the cocoon is spun. To spin this cocoon the worm spins a net and then forms a shell around his body. The worm swings its head in a figure formation and expels fluid from two sacs in its body. The two strands are excreted from minute openings or spinnerets, close together in the lower jaw. The fluid solidifies when in contact with the air. The two filaments known as fibroin are cemented together by a glue known as sericin. The sericin is excreted from two glands. The worm makes more than one movement of its head each second and be heard at work even after the cocoon has become so thick that the worm cannot be seen. It takes two or three days to complete a cocoon. The worm then changes into the 'Pupa' or 'Chrysalis'. The tangle of loose silk with which the silk worm is originally secured its position in the straw, is called 'Floss' or 'Blaze'.

In about two weeks, the moth will develop if the chrysalis is permitted to live. The moth escapes through the bottom of the cocoon and breaks the silk strands in the several layers in making its escape. An alkaline solution secreted by the moth allows it to break the strands more easily. It is customary to permit the development of only enough moths for breeding and egg-laying, because the broken cocoons are of less value than those having long, unbroken filaments. Life cycle is terminated at this point by process known as 'Stoving' or 'Stifling'.

In order to produce unpierced cocoon the chrysalis is killed by heat in dry air, more rarely by hot water or steam. The cocoons are weighed; the female moths being heavier, can thus be selected and allowed to escape. The moths live only a few days, during which they mate and lay eggs. It is estimated that nearly 3000 cocoons are required to make a yard of silk fabric. Silkworms are subject to many diseases. The most important of these is 'pebrine'. The worms are damaged by changes in room temperature and by moisture in their food. These factors influence the quality of silk produced. Wild silk is that produced from other types of moths, which have not lent themselves to domestication. These cocoons must be sought in the trees and many of them have already been pierced when found. Wild silk is less uniform but is coarser and somewhat stronger than the cultivated variety. The most common wild silk is that from the tussah or tussar silkworm of Asia. This worm feeds on mulberry, oak and other trees. The term is generally applied to all wild silks, but strictly speaking tussah is an Indian silkworm.

After the cocoons have been sorted, they are put through a series of hot and cold immersions, as the sericin must be softened to permit the unwinding of the filament as one continuous thread. Raw silk consists of about 80% fibroin and 20% sericin. At this time, only about 1% of the sericin is removed, because this silk gum is a needed protection during the further handling of delicate filament.

The process of unwinding the filament from the cocoon is called reeling. The care and skill used in reeling operation prevents defects in the raw silk. As the filament of a single cocoon is too fine for commercial use, 3 to 10 strands are usually reeled at a time to produce the desired diameter of raw silk thread. The cocoons float in H2O, bobbing up and down, as the filaments are drawn upward through porcelain eyelets and are rapidly wound on wheels or drums while the operator watches to detect flaws. The sericin acts as an adhesive. It aids in holding several filaments together while they are combined to form the single thread. The remaining part of filament is used as valuable raw material for the manufacture of spun silk. The silk filaments are reeled into skeins, which are packed in small bundles called books.

'Reeled silk is' a term applied to the raw silk strand that is formed by combining several filaments from separate cocoons. Reeled silk is transformed into silk yarns - also called silk thread-by a process known as 'throwing'. The raw silk skeins are sorted according to size, color, and length or quantity, then soaked in warm water with soap or oil.

This softening of the sericin aids in handling the thread. After mechanical drying, the skeins are placed on light reels from which the silk is wound on bobbins. During this winding operation, single strands may be given any desired amount of twist. If two or more yarns are to be doubled, they are twisted again in the same direction or in a reverse direction depending on the kind of thread to be made.

Thrown silk yarns still contain some sericin that must be removed in another soap bath to bring out the natural luster and the soft feel of the silk. As much as 25% of the weight is lost by the degumming process. When gum has been removed, the silk fiber or fabric is a creamy white color, beautifully lustrous and luxuriantly soft. It takes place after throwing for preparing yarn for dyeing. A small amount of sericin is sometimes left in the yarn or in the fabric to give the finished product added strength or a dull finish.

The amount of weight that silk loses in the degumming process is an appreciable factor in manufacturing costs because the manufacturer buys silk by weight. The weighing of silk fabric with metallic substances to make up for the weight lost by degumming is an accepted practice in the silk industry. Weighted silk, however loses the natural elasticity of the silk fiber and is subject to deterioration when exposed to sunlight, perspiration and dry cleaning.

durable and has strong lustre