The inheritance of a trait that is determined by a gene located on one of the sex chromosomes is called sex linked inheritance.

The X – linked and Y – linked genes in the differential region (non–homologus region) do not undergo pairing or crossing over during meiosis. The inheritance of X or Y linked genes is called sex-linked inheritance.

Haemophilia is commonly known as bleeder’s disease, which is more common in men than women. This hereditary disease was first reported by John Cotto in 1803. Haemophilia is caused by a recessive X-linked gene. A person with a recessive gene for haemophilia lacks a normal clotting substance (thromboplastin) in blood, hence minor injuries cause continuous bleeding, leading to death. The females are carriers of the disease and would transmit the disease to 50% of their sons even if the male parent is normal. Haemophilia follows the characteristic criss - cross pattern of inheritance.

In human beings a dominant X – linked gene is necessary for the formation of colour sensitive cells, the cones. The recessive form of this gene is incapable of producing colour sensitive cone cells. Homozygous recessive females (XcXc) and hemizygous recessive males (XcY) are unable to distinguish red and green colour. The inheritance of colour blindness can be studied in the following two types of marriages.

(i) Marriage between colour blind man and normal visioned woman 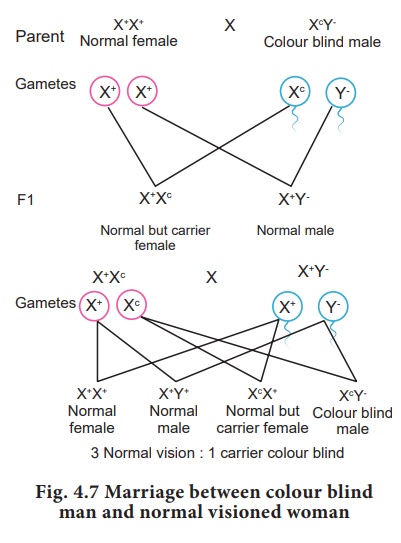 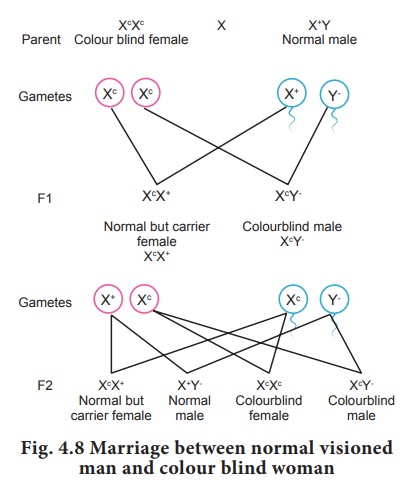