Certain characters are controlled by non-nuclear genomes found in chloroplast, mitochondria, infective agents and plasmids. These characters do not reveal Mendelian pattern of inheritance. The inheritance of the extra chromosomal genes are found to exhibit maternal influence. Maternal effect is due to the asymmetric contribution of the female parent to the development of zygote. Although both male and female parents contribute equally to the zygote in terms of chromosomal genes, the female parent usually contributes the zygote’s initial cytoplasm and organelles, since the sperms contain very little cytoplasm. If there are hereditary units in the cytoplasm, these will be transmitted to the offsprings through the egg, so the offsprings exhibit maternal effect.

The cytoplasmic extranuclear genes have a characteristic pattern of inheritance which do not resemble the genes of nuclear chromosomes and is known as extra chromosomal or extra nuclear or cytoplasmic inheritance and exhibit maternal influence. In extra nuclear inheritance, male and female parents contribute equally their nuclear genes to the progeny but do not make equal contribution of extra chromosomal genes hence, the crosses can yield different (or) non Mendelian results. Cytoplasmic inheritance in animals can be studied with reference to shell coiling in Limnaea and kappa particles in Paramecium.

Limnaea peregra is a freshwater snail. The shell of these animals are spirally coiled. The coiling of the shell is clockwise (dextral) or anticlockwise (sinistral). Both type of coilings are produced by two different types of genetically controlled cleavages namely, dextral cleavage and sinistral cleavage. 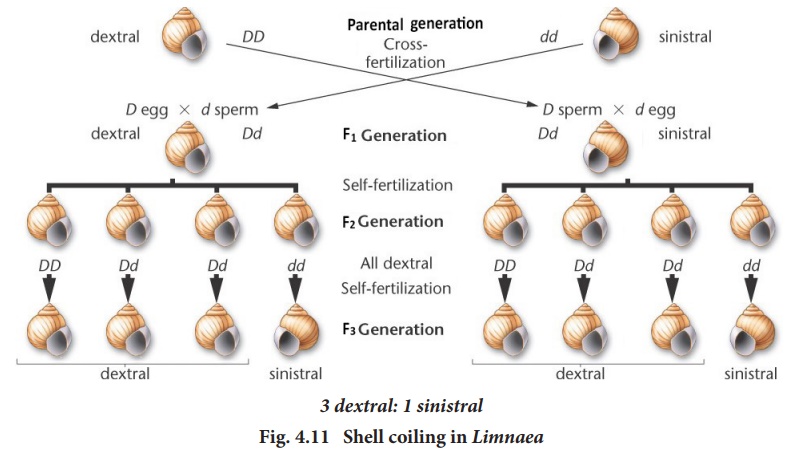 When the F1 heterozygous dextral individual (Dd) were self crossed the F2 generation showed dextral coiling with genotype of 1DD, 2Dd and 1dd (Fig-4.11 left).

Why does this pattern occur? The type of cleavage depends on the organization of the egg which is established before the maturation division of the oocyte nucleus and by the influence of the maternal genotype. The direction of coiling of the shell depends upon the orientation of the mitotic spindle during the first cleavage. Obviously, maternal control affects only one generation. In each generation the coiling is dependent on the maternal genotype.

The kappa liberates a toxin, paramecin which is lethal to other individuals called “sensitives”.

Kappa particles appear to be either parasites or more possible symbionts since they do not harm their hosts. A killer Paramecium may contain hundreds of kappa particles which have their own DNA and which in turn are dependent on a dominant gene ‘K’ for its presence in the killer Paramecia. Paramecia with nuclear genotype “kk” are unable to produce kappa particles. The inheritance of killer trait does not follow the Mendelian pattern of inheritanc.

When a killer Paramecium KK conjugates with sensitive ”kk”, the exconjugants are all heterozygous for Kk genes. The Kk genotype suggest that both exconjugants should be killers. But this is not seen. If conjugation lasts only for a short period of time, there is no exchange of cytoplasm between the two Paramecia resulting in both killers (Kk) and sensitives. However prolonged conjugation permits mixing of cytoplasm of both the conjugants resulting in killers only. This confirms that the killer trait is determind cytoplasmically. Dominant chromosomal genes are required to maintain the cytoplasmic kappa particles. Without a dominant gene this particle would disappear from the cytoplasm of the host. 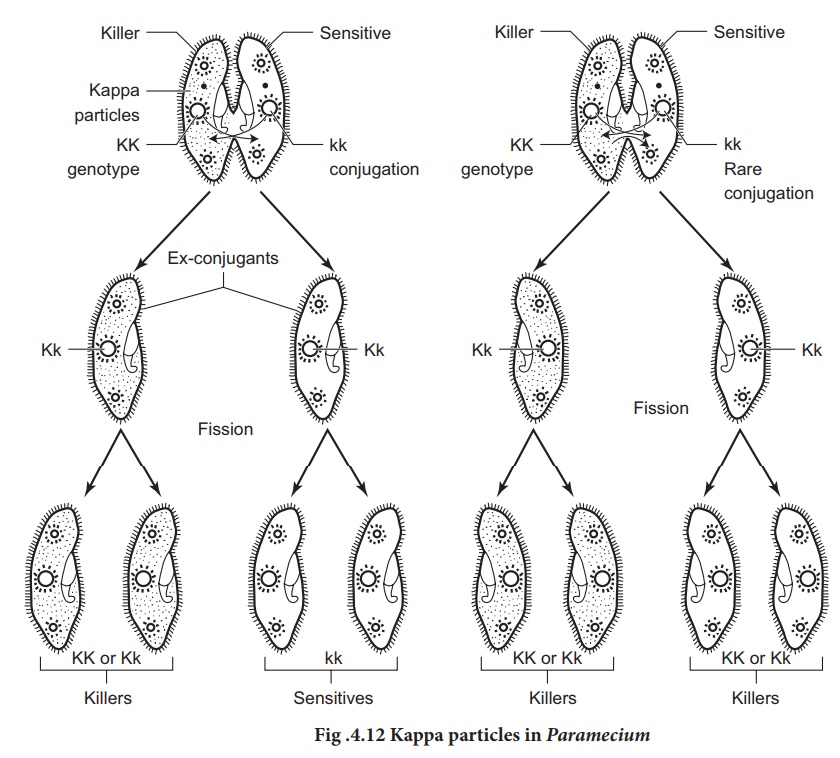 The kappa appears to be a bacterium, Caedobacter taeniospiralis that has its own DNA and replicates autonomously. Kappa particle occurs in atleast two forms; N and B forms. The N form is the infective form that passes from one Paremicium to another and confers the killer specificity to the host cell. The “N” form is attacked by a bacteriophage that induces the formation of inculsions called “R” bodies, inside the kappa particles and convert it to the “B” form.

These “R” bodies are visible under the light microscope as refractile bodies. In the “B” form, kappa can no longer replicate, it is offen lysed within the cell, however, it confers killer specificity on the host cell. Whether viral DNA or kappa DNA codes the toxin paramecin is not known at present.