Multiple allelism occurs in humans, particularly in the inheritance of different types of blood groups.

Blood differs chemically from person to person. When two different incompatible blood types are mixed, agglutination (clumping together) of erythrocytes (RBC) occurs. The basis of these chemical differences is due to the presence of antigens (surface antigens) on the membrane of RBC and epithelial cells. Karl Landsteiner discovered two kinds of antigens called antigen ‘A’ and antigen ‘B’ on the surface of RBC’s of human blood. Based on the presence or absence of these antigens three kinds of blood groups, type ‘A’, type ‘B’, and type ‘O’ (universal donor)were recognized. The fourth and the rarest blood group ‘AB’ (universal recipient) was discovered in 1902 by two of Landsteiner’s students Von De Castelle and Sturli.

Bernstein in 1925 discovered that the inheritance of different blood groups in human beings is determined by a number of multiple allelic series. The three autosomal alleles located on chromosome 9 are concerned with the determination of blood group in any person. The gene controlling blood type has been labeled as ‘L’ (after the name of the discoverer, Landsteiner) or I (from isoagglutination). The I gene exists in three allelic forms, IA, IB and IO. IA specifies A antigen. IB allele determines B antigen and IO allele specifies no antigen. Individuals who possess these antigens in their fluids such as the saliva are called secretors.

From the phenotypic combinations it is evident that the alleles IA and IB are dominant to IO, but co-dominant to each other (IA=IB). Their dominance hierarchy can be given as (IA=IB> IO). A child receives one of three alleles from each parent, giving rise to six possible genotypes and four possible blood types (phenotypes). The genotypes are IAIA, IA IO, IBIB, IB IO, IAIB and IO IO. 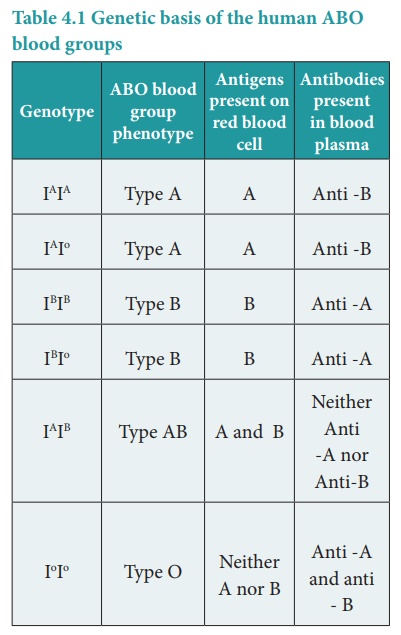 The Rh factor or Rh antigen is found on the surface of erythrocytes. It was discovered in 1940 by Karl Landsteiner and Alexander Wiener in the blood of rhesus monkey, Macaca rhesus and later in human beings. The term ‘Rh factor’ refers to “immunogenic D antigen of the Rh blood group system. An individual having D antigen are Rh D positive (Rh+) and those without D antigen are Rh D negative (Rh-)”. Rhesus factor in the blood is inherited as a dominant trait. Naturally occurring Anti D antibodies are absent in the plasma of any normal  individual. However if an Rh- (Rh negative) person is exposed to Rh+ (Rh positive) blood cells (erythrocytes) for the first time, anti D antibodies are formed in the blood of that individual. On the other hand, when an Rh positive person receives Rh negative blood no effect is seen.