Sex determination is the method by which the distinction between male and female is established in a species.

In  heterogametic  sex determination  one  of  the  sexes  produces similar gametes and the other sex produces dissimilar gametes. The sex of the offspring is determined at the time of fertilization.

This method of sex determination is seen in bugs, some insects such as cockroaches and grasshoppers. The female with two X chromosomes are homogametic (XX) while the males with only one X chromosome are heterogametic (XO). The presence of an unpaired X chromosomes determines the male sex. The males with unpaired ‘X’ chromosome produce two types of sperms, one half with X chromosome and other half without X chromosome. The sex of the offspring depends upon the sperm that fertilizes the egg (Fig. 4.2). 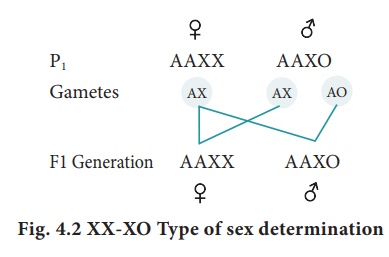 This method of sex determination is seen in human beings and in Drosophila. The females are homogametic with chromosome, while the males are heterogametic with X and Y chromosome. Homogametic females produce only one kind of egg, each with one X chromosome, while the heterogametic males produce two kinds of sperms some with X chromosome and some with Y chromosome. The sex of the embryo depends on the fertilizing sperm. An egg fertilized by an ‘X’ bearing sperm produces a female, if fertilized by a ‘Y’ bearing sperm, a male is produced (Fig. 4.3). 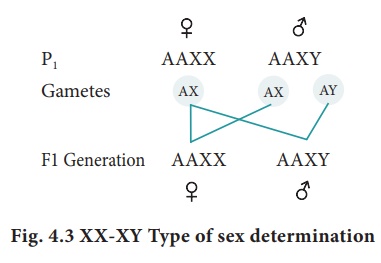 In this method of sex determination, the homogametic male possesses two ‘X’ chromosomes as in certain insects and certain vertebrates like fishes, reptiles and birds producing a single type of gamete; while females produce dissimilar gametes. The female sex consists of a single ‘X’ chromosome or one ‘X’ and one ‘Y’ chromosome. Thus the females are heterogametic and produce two types of eggs. To avoid confusion with the XX-XO and XX-XY types of sex determination, the alphabets ‘Z’ and ‘W’ are used here instead of X and Y respectively. Heterogametic females are of two types, ZO-ZZ type and ZW-ZZ type. 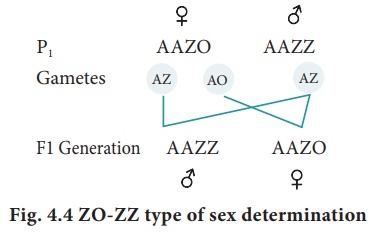 This method of sex determination occurs in certain insects (gypsy moth) and in vertebrates such as fishes, reptiles and birds. In this method the female has one ‘Z’ and one ‘W’ chromosome (ZW) producing two types of eggs, some carrying the Z chromosomes and some carry the W chromosome. The male sex has two ‘Z’ chromosomes and is homogametic (ZZ) producing a single type of sperm (Fig .4.5). 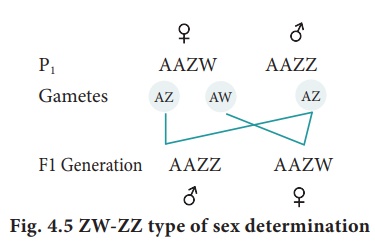 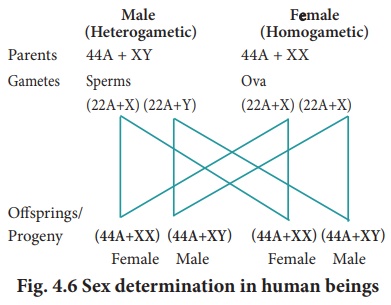 The Y Chromosome and Male Development

Current analysis of Y chromosomes has revealed numerous genes and regions with potential genetic function; some genes with or without homologous counterparts are seen on the X. Present at both ends of the Y chromosome are the pseudoautosomal regions (PARs) that are similar with regions on the X chromosome which synapse and recombine during meiosis. The remaining 95% of the Y chromosome is referred as the Non - combining Region of the Y (NRY) . The NRY is divided equally into functional genes (euchromatic) and non functional genes (heterochromatic). Within the euchromatin regions, is a gene called Sex determining region Y (SRY). In humans, absence of Y chromosome inevitably leads to female development and this SRY gene is absent in X chromosome. The gene product of SRY is the testes determining factor (TDF) present in the adult male testis.

Genic balance mechanisms of sex determination in Drosophila was first studied by C.B. Bridges. In Drosophila, the presence of Y chromosome is essential for the fertility of male sex, but does not determine the male sex. The gene for femaleness is located on the X chromosome and those for maleness are located on the autosomes. When geneticist C.B. Bridges, working with Drosophila, crossed a triploid (3n) female with a normal male, he observed many combinations of autosomes and sex chromosomes in the offspring. From his results Bridges in 1921 suggested that sex in Drosophila is determined by the balance between the genes for femaleness located on the ‘X’ chromosomes and those for maleness located on the ‘autosomes’ . Hence the sex of an individual is determined by the ratio of its X chromosome to that of its autosome sets. This ratio is termed sex index and is expressed as:

Change in this ratio leads to a changed sex phenotype. The results obtained from a cross between triploid female Drosophila (3A:3X) with a diploid male (2A: XY) is shown in tables 4.2. and 4.3. 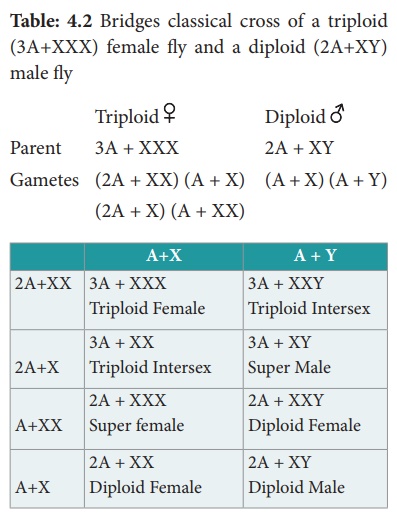 • X-Chromosome was discovered by Henking (1891)

• Y-Chromosome was discovered by Stevens (1902) 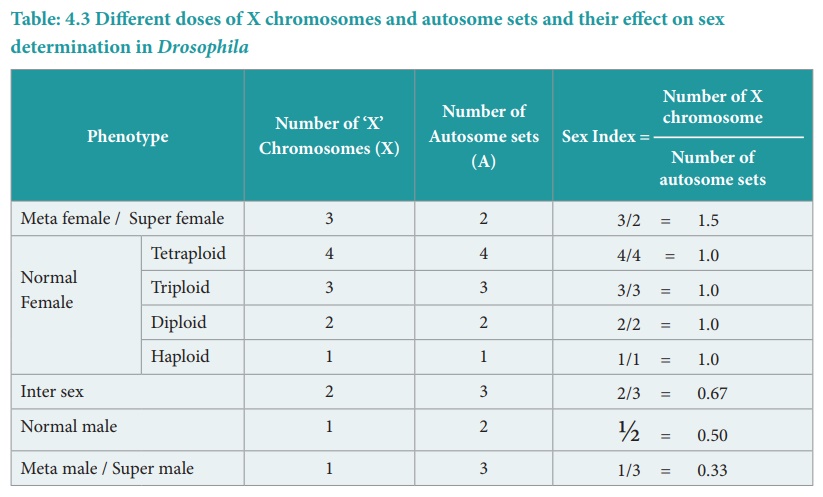 In 1949, Barr and Bertram first observed a condensed body in the nerve cells of female cat which was absent in the male. This condensed body was called sex chromatin by them and was later referred as Barr body. In the XY chromosomal system of sex determination, males have only one X chromosome, whereas females have two. A question arises: how does the organism compensate for this dosage differences between the sexes? In mammals the necessary dosage compensation is accomplished by the inactivation of one of the X chromosome in females so that both males and females have only one functional X chromosome per cell.

Mary Lyon suggested that Barr bodies represented an inactive chromosome, which in females becomes tightly coiled into a heterochromatin, a condensed and visible form of chromatin (Lyon’s hypothesis). The number of Barr bodies observed in cell was one less than the number of X-Chromosome. XO females have no Barr body, whereas XXY males have one Barr body.

• The number of Barr bodies follows N-1 rule (N minus one rule), where N is the total number of X chromosomes present.

This mode of sex determination facilitates the evolution of sociality in which only one diploid female becomes a queen and lays the eggs for the colony. All other females which are diploid having developed from fertilized eggs help to raise the queen’s eggs and so contribute to the queen’s reproductive success and indirectly to their own, a phenomenon known as Kin Selection. The queen constructs their social environment by releasing a hormone that suppresses fertility of the workers.