A new classification method for both linear and nonlinear data

With the new dimension, it searches for the linear optimal separating hyperplane (i.e.,

With an appropriate nonlinear mapping to a sufficiently high dimension, data from two classes can always be separated by a hyperplane

Features: training can be slow but accuracy is high owing to their ability to model complex nonlinear decision boundaries (margin maximization)

Used both for classification and prediction

1 The Case When the Data Are Linearly Separable 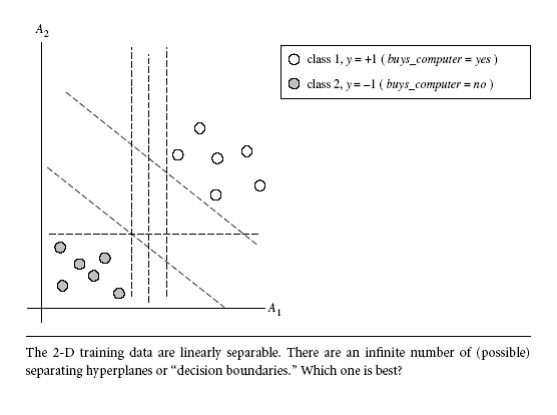 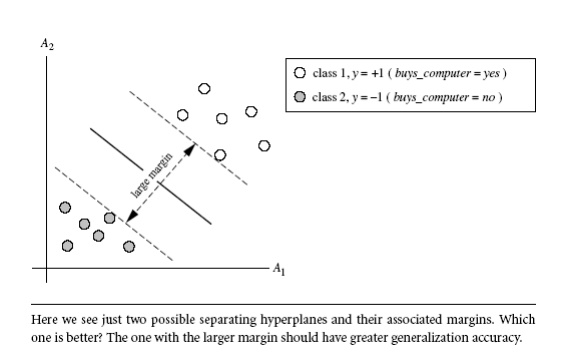 2 The Case When the Data Are Linearly Inseparable

The good news is that the approach described for linear SVMs can be extended to create nonlinear SVMs for the classification of linearly inseparable data (also called nonlinearly separable data, or nonlinear data, for short). Such SVMs are capable of finding nonlinear decision boundaries (i.e., nonlinear hypersurfaces) in input space.

“So,” you may ask, “how can we extend the linear approach?” We obtain a nonlinear SVM by extending the approach for linear SVMs as follows. There are two main steps. In the first step, we transform the original input data into a higher dimensional space using a nonlinear mapping. Several common nonlinear mappings can be used in this step, as we will describe further below. Once the data have been transformed into the new higher space, the second step searches for a linear separating hyperplane in the new space.We again end up with a quadratic optimization problem that can be solved using the linear SVM formulation. The maximal marginal hyperplane found in the new space corresponds to a nonlinear separating hypersurface in the original space.