Mining multilevel association rules. Suppose we are given the task-relevant set of transactional data in Table for sales in an AllElectronics store, showing the items purchased for each transaction.

Because users or experts often have insight as to which groups are more important than others, it is sometimes more desirable to set up user-specific, item, or group based minimal support thresholds when mining multilevel rules. For example, a user could set up the minimum support thresholds based on product price, or on items of interest, such as by setting particularly low support thresholds for laptop computers and flash drives in order to pay particular attention to the association patterns containing items in these categories.

Considering each database attribute or warehouse dimension as a predicate, we can therefore mine association rules containing multiple predicates, such as

Quantitative attributes, in this case, are discretized before mining using predefined concept hierarchies or data discretization techniques, where numeric values are replaced by interval labels. Categorical attributes may also be generalized to higher conceptual levels if desired. If the resulting task-relevant data are stored in a relational table, then any of the frequent itemset mining algorithms we have discussed can be modified easily so as to find all frequent predicate sets rather than frequent itemsets. In particular, instead of searching on only one attribute like buys, we need to search through all of the relevant attributes, treating each attribute-value pair as an itemset. 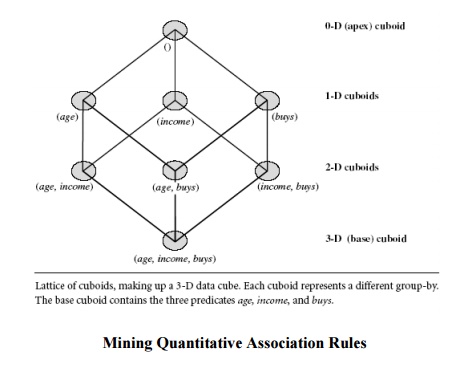 Binning: Quantitative attributes can have a very wide range of values defining their domain. Just think about how big a 2-D grid would be if we plotted age and income as axes, where each possible value of age was assigned a unique position on one axis, and similarly, each possible value of income was assigned a unique position on the other axis! To keep grids down to a manageable size, we instead partition the ranges of quantitative attributes into intervals. These intervals are dynamic in that they may later be further combined during the mining process. The partitioning process is referred to as binning, that is, where the intervals are considered ―bins.‖ Three common binning strategies area as follows: 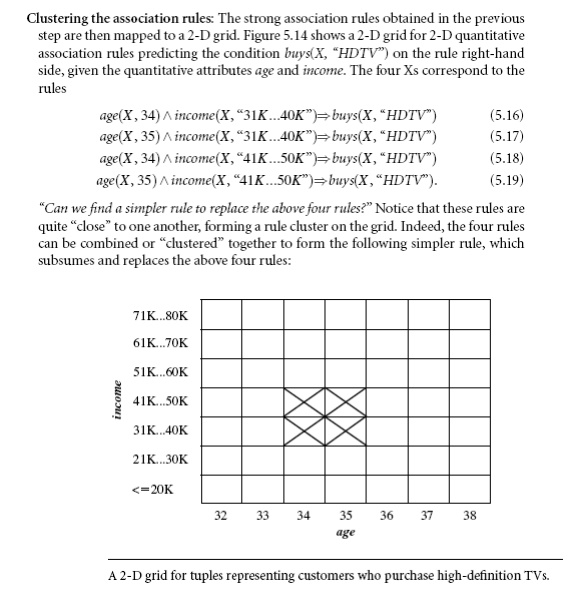