An attribute selection measure is a heuristic for selecting the splitting criterion that ―best‖ separates a given data partition, D, of class-labeled training tuples into individual classes.

o     Branch represents an outcome of the test

o     The topmost node in a tree is the root node.

o     At start, all the training examples are at the root

o     Identify and remove branches that reflect noise or outliers 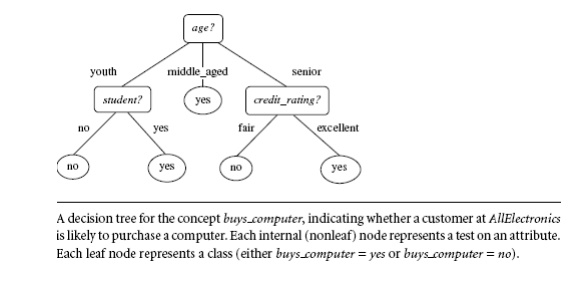 A typical decision tree is shown in Figure. It represents the concept buys computer, that is, it predicts whether a customer at AllElectronics is likely to purchase a computer. Internal nodes are denoted by rectangles, and leaf nodes are denoted by ovals. Some decision tree algorithms produce only binary trees (where each internal node branches to exactly two other nodes), whereas others can produce non binary trees.

“How are decision trees used for classification?” Given a tuple, X, for which the associated class label is unknown, the attribute values of the tuple are tested against the decision tree. A path is traced from the root to a leaf node, which holds the class prediction for that tuple. Decision trees can easily be converted to classification rules. 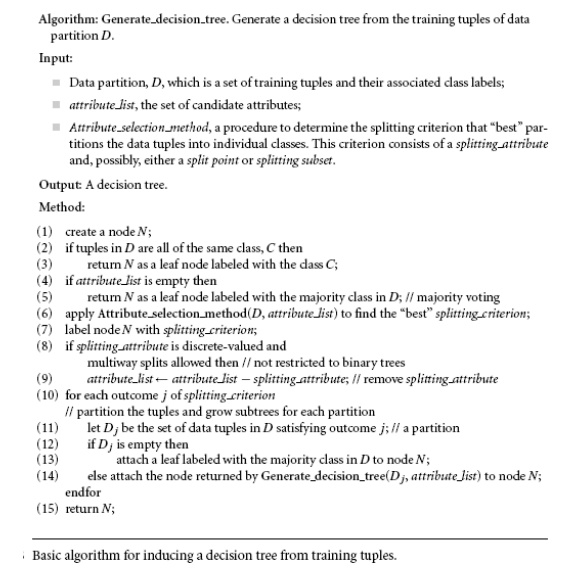 The tree starts as a single node, N, representing the training tuples in D (step 1)

A partition is pure if all of the tuples in it belong to the same class. In other words, if we were to split up the tuples in D according to the mutually exclusive outcomes of the splitting criterion, we hope for the resulting partitions to be as pure as possible.

The node N is labeled with the splitting criterion, which serves as a test at the node (step 7). A branch is grown from node N for each of the outcomes of the splitting criterion. The tuples in D are partitioned accordingly (steps 10 to 11). There are three possible scenarios, as illustrated in Figure. Let A be the splitting attribute. A has v distinct values, {a1, a2, : : : , av}, based on the training data. 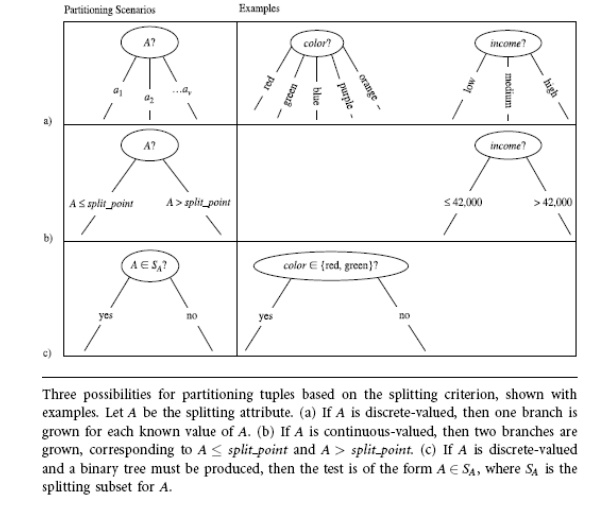 In other words, Gain(A) tells us how much would be gained by branching on A. It is the expected reduction in the information requirement caused by knowing the value of A. The attribute A with the highest information gain, (Gain(A)), is chosen as the splitting attribute at node N.

Table 6.1 presents a training set, D, of class-labeled tuples randomly selected from the AllElectronics customer database. (The data are adapted from [Qui86]. In this example, each attribute is discrete-valued. Continuous-valued attributes have been generalized.) The class label attribute, buys computer, has two distinct values (namely, {yes, no}); therefore, there are two distinct classes (that is, m = 2). Let class C1 correspond to yes and class C2 correspond to no. There are nine tuples of class yes and five tuples of class no. A (root) node N is created for the tuples in D. To find the splitting criterion for these tuples, we must compute the information gain of each attribute. We first use Equation (6.1) to compute the expected information needed to classify a tuple in D: 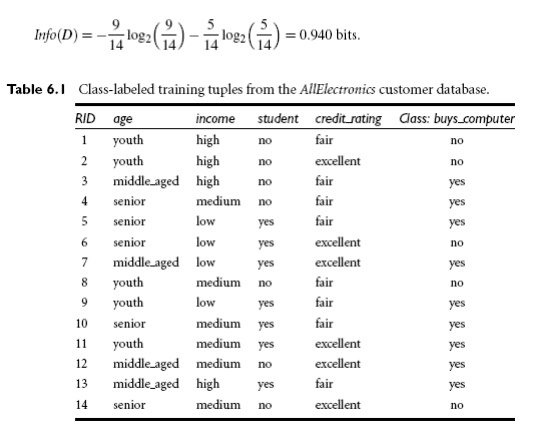 Hence, the gain in information from such a partitioning would be

Similarly, we can compute Gain(income) = 0.029 bits, Gain(student) = 0.151 bits, and Gain(credit rating) = 0.048 bits. Because age has the highest information gain among the attributes, it is selected as the splitting attribute. Node N is labeled with age, and branches are grown for each of the attribute’s values. The tuples are then partitioned accordingly, as shown in Figure 6.5. Notice that the tuples falling into the partition for age = middle aged all belong to the same class. Because they all belong to class “yes,” a leaf should therefore be created at the end of this branch and labeled with “yes.” The final decision tree returned by the algorithm is shown in Figure 6.5. 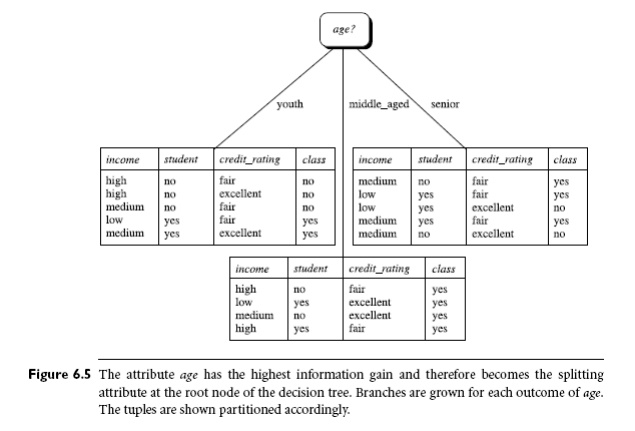