. Let X be a data tuple. In Bayesian terms, X is considered ―evidence.‖ As usual, it is described by measurements made on a set of n attributes. Let H be some hypothesis, such as that the data tuple X belongs to a specified class C. For classification problems, we want to determine P(HjX), the probability that the hypothesis H holds given the ―evidence‖ or observed data tuple X. In other words, we are looking for the probability that tuple X belongs to class C, given that we know the attribute description of X. 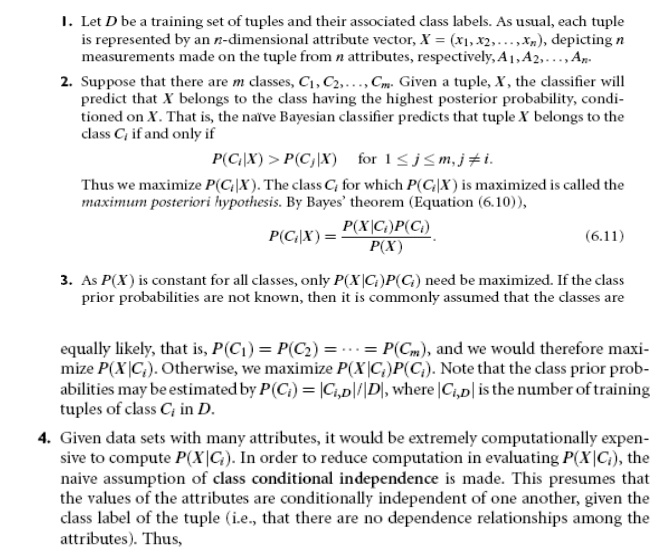 .A belief network is defined by two components—a directed acyclic graph and a set of conditional probability tables (Figure 6.11). Each node in the directed acyclic graph represents a random variable. The variables may be discrete or continuous-valued. They may correspond to actual attributes given in the data or to ―hidden variables‖ believed to form a relationship (e.g., in the case of medical data, a hidden variable may indicate a syndrome, representing a number of symptoms that, together, characterize a specific disease). Each arc represents a probabilistic dependence. If an arc is drawn from a node Y to a node Z, then Y is a parent or immediate predecessor of Z, and Z is a descendant of Y. Each variable is conditionally independent of its non descendants in the graph, given its parents. 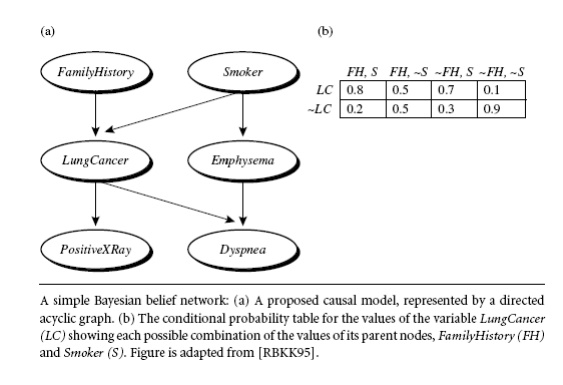 A belief network has one conditional probability table (CPT) for each variable. The CPT for a variable Y specifies the conditional distribution P(YjParents(Y)), where Parents(Y) are the parents of Y. Figure(b) shows a CPT for the variable LungCancer. The conditional probability for each known value of LungCancer is given for each possible combination of values of its parents. For instance, from the upper leftmost and bottom rightmost entries, respectively, we see that

Let X = (x1, : : : , xn) be a data tuple described by the variables or attributes Y1, : : : , Yn, respectively. Recall that each variable is conditionally independent of its non descendants in the network graph, given its parents. This allows the network to provide a complete representation of the existing joint probability distribution with the