Though industries get finance from commercial banks, the quantum and the term will be very much limited generally.

Though industries get finance from commercial banks, the quantum and the term will be very much limited generally. Commercial banks lend for short term only, as they get only short-term deposits from the public. Further lending to industries is only a fragment of the total lending by the banks.

Hence, there is a need and urgency of establishing long-term credit facilities to industries.The institutional set-up in India for financing and promoting industries are as follows 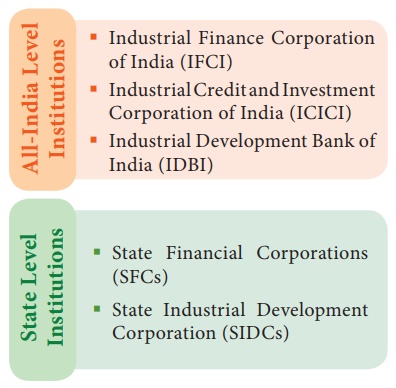 This was first in the chain of establishment of financial corporations to provide financial assistance for industrial development. This was established on July 1, 1948 under the Act of the Parliament. IFCI provides assistance to the industrial concerns in the following ways:

i)  Long-term loans; both in rupees and foreign currencies.

iv)  Guaranteeing the deferred payments in respect of machinery imported from abroad or purchased in India; and

The IFCI raises its resources by way of (a) issue of bonds in the market; (b) borrowing from Industrial Development Bank of India and the Central Government; (c) foreign credit secured from foreign financial institutions and borrowings in the international capital markets. 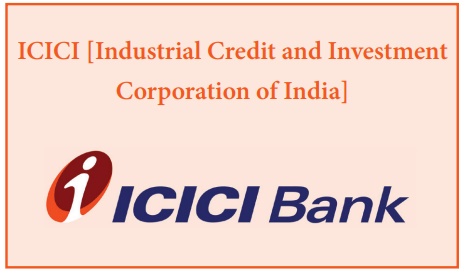 This was set up on 5th January 1955 as a joint- stock company on the advice given by a three-man mission sponsored by the World Bank and The Government of USA to the Government of India. The principal purpose of this institution is to channelize the World Bank funds to industry in India and also to help build up a capital market. Initially the capital of ICICI was held by private companies, institutions and individuals. But now, a very large part of its equity capital is held by public sector institutions, such as banks, LIC, GIC and its subsidiaries, as ‘this private institution was nationalized. 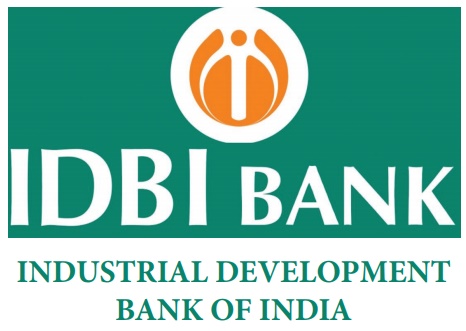 The Industrial Development Bank of India has been conceived with the primary object of creating an apex institution to co- ordinate the activities of other financial institutions, including banks. The Development Bank was a wholly owned subsidiary of the Reserve Bank of India upto February 15, 1976. It was delinked from the RBI with effect from February 16, 1976 and made an autonomous corporation fully owned by the Government of India.

Functions of IDBI: The functions of IDBI fall into two groups (i) Assistance to other financial institutions; and (ii) Direct assistance to industrial concerns either on its own or in participation with other institutions. The IDBI can provide refinance in respect of term loans to industrial concerns given by the IFC, the SFCs, other financial institutions notified by the Government, scheduled banks and state cooperative banks.

A special feature of the IDBI is the provision for the creation of a special fund known as the Development Assistance Fund. The fund is intended to provide assistance to industries which require heavy investments with low anticipated rate of return. Such industries may not be able to get assistance in the normal course. The financing of exports was also undertaken by the IDBI till the establishment of EXIM BANK in March, 1982.

The government of India passed in 1951 the State Financial Corporations Act and SFCs were set up in many states. The SFCs are mainly intended for the development of small and medium industrial units within their respective states. However, in some cases they extend to neighboring states as well. 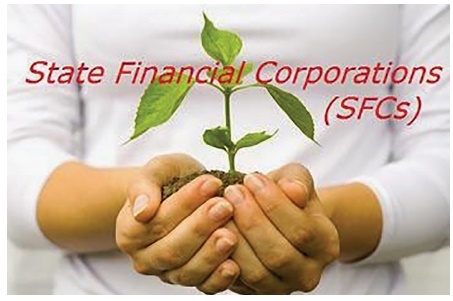 The SFCs provide loans and underwriting assistance to industrial units having paid-up capital and reserves not exceeding ₹ 1 crore. The maximum amount that can be sanctioned to an industrial concern by SFC is ₹ 60 lakhs.

SFCs depend upon the IDBI for refinance in respect of the term loans granted by them. Apart from these, the SFCs can also make temporary borrowings from the RBI and borrowings from IDBI and by the sale of bonds.

The Industrial Development Corporations have been set up by the state governments and they are wholly owned by them. These institutions are not merely financing agencies; they are entrusted with the responsibility of accelerating the industrialization of their states.

SIDCOs provide financial assistance to industrial concerns by way of loans guarantees and underwriting of or direct subscriptions to shares and debentures. In addition to these, they undertake various promotional activities, such as conducting techno-economic surveys, project identification, preparation of feasibility studies and selection and training of entrepreneurs. They also promote joint sector projects in association with private promoter in such type of projects. SIDCOs take 26 percent, private co -promoter takes 25 percent of the equity, and the rest is offered to the investing public. SIDCOs undertake the development of industrial areas by providing all infrastructural facilities and initiation of new growth centers. They also administer various State government incentive schemes. SIDCOs get refinance facilities form IDBI. They also borrow through bonds and accept deposits.