The bank rate is the rate at which the Central Bank of a country is prepared to re-discount the first class securities.

I. Quantitative or General Methods:

In narrow sense, the Central Bank starts the purchase and sale of Government securities in the money market.

Under this system the Central Bank controls credit by changing the Cash Reserves Ratio. For example, if the Commercial Banks have excessive cash reserves on the basis of which they are creating too much of credit,this will be harmful for the larger interest of the economy. So it will raise the cash reserve ratio which the Commercial Banks are required to maintain with the Central Bank. 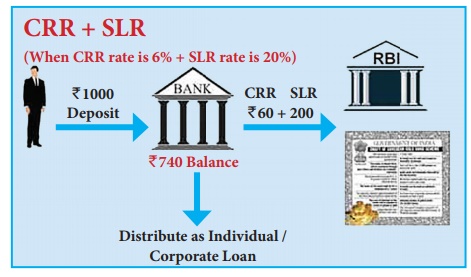 Variable Cash Reserve Ratio as an objective of monetary policy was first suggested by J.M. Keynes. It was first followed by Federal Reserve System in United States of America. The commercial banks as per the statute has to maintain reserves based on their demand deposit and fixed deposit with central bank is called as Cash Reserve Ratio.

Statutory Liquidity Ratio (SLR) is the amount which a bank has to maintain in the form of cash, gold or approved securities. The quantum is specified as some percentage of the total demand and time liabilities (i.e., the liabilities of the bank which are payable on demand anytime, and those liabilities which are accruing in one month’s time due to maturity) of a bank.

This is the oldest method of credit control. Rationing of credit as an instrument of credit control was first used by the Bank of England by the end of the 18th Century. It aims to control and regulate the purposes for which credit is granted by commercial banks. It is generally of two types.

a) The variable portfolio ceiling: It refers to the system by which the central bank fixes ceiling or maximum amount of loans and advances for every commercial bank.

b) The variable capital asset ratio: It refers to the system by which the central bank fixes the ratio which the capital of the commercial bank should have to the total assets of the bank.

Direct action against the erring banks can take the following forms.

a) The central bank may refuse to altogether grant discounting facilities to such banks.

b) The central bank may refuse to sanction further financial accommodation to a bank whose existing borrowing are found to be in excess of its capital and reserves.

c) The central bank may start charging penal rate of interest on money borrowed by a bank beyond the prescribed limit.

Central Bank in order to make their policies successful, take the course of the medium of publicity. A policy can be effectively successful only when an effective public opinion is created in its favour.

The down payment is raised and the number of installments reduced for the credit sale.

6. Changes in the Marginal Requirements on Security Loans:

This system is mostly followed in U.S.A. Under this system, the Board of Governors of the Federal Reserve System has been given the power to prescribe margin requirements for the purpose of preventing an excessive use of credit for stock exchange speculation.

This system is specially intended to help the Central Bank in controlling the volume of credit used for speculation in securities under the Securities Exchange Act, 1934.

The Repo Rate and the Reverse Repo Rate are the frequently used tools with which the RBI can control the availability and the supply of money in the economy. RR is always greater than RRR in India

The rate at which the RBI is willing to lend to commercial banks is called Repo Rate. Whenever banks have any shortage of funds they can borrow from the RBI, against securities. If the RBI increases the Repo Rate, it makes borrowing expensive for banks and vice versa. As a tool to control inflation, RBI increases the Repo Rate, making it more expensive for the banks to borrow from the RBI. Similarly, the RBI will do the exact opposite in a deflationary environment.

The rate at which the RBI is willing to borrow from the commercial banks is called reverse repo rate. If the RBI increases the reverse repo rate, it means that the RBI is willing to offer lucrative interest rate to banks to park their money with the RBI. This results in a decrease in the amount of money available for banks customers as banks prefer to park their money with the RBI as it involves higher safety. This naturally leads to a higher rate of interest which the banks will demand from their customers for lending money to them.