Monetary Policy is the macroeconomic policy being laid down by the Central Bank towards the management of money supply and interest rate. It

Monetary Policy is the macroeconomic policy being laid down by the Central Bank towards the management of money supply and interest rate. It is the demand side economic policy used by the government of a country to achieve macroeconomic objectives like inflation, consumption, growth and liquidity. The monetary policy gained its significance after the World War II, thanks to the initiation made by Milton Friedman, who is associated with the doctrine of “monetarism” and who received Nobel Prize in 1976. He boldly announced in his book “Monetary History of the UnitedStates, 1867 – 1960” that the Great Depression of the 1930’s was largely the outcome of the bungling monetary policies of the Federal Reserve System. 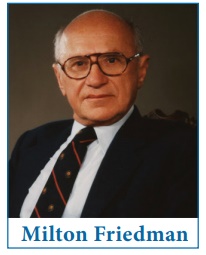 Expansionary policy is cheap money policy when a monetary authority uses its tools to stimulate the economy. An expansionary policy maintains short-term interest rates at a lower than usual rate or increases the total supply of money in the economy more rapidly than usual. It is traditionally used to try to combat unemployment by lowering interest rates in the hope that less expensive credit will entice businesses into expanding. This increases aggregate demand (the overall demand for all goods and services in an economy), which boosts short-term growth as measured by gross domestic product (GDP) growth.

The Contractionary monetary policy is dear money policy, which maintains short-term interest rates higher than usual or which slows the rate of growth in the money supply or even shrinks it. This slows short-term economic growth and lessens inflation. Contractionary monetary policy can lead to increased unemployment and depressed borrowing and spending by consumers and businesses, which can eventually result in an economic recession if implemented too vigorously. 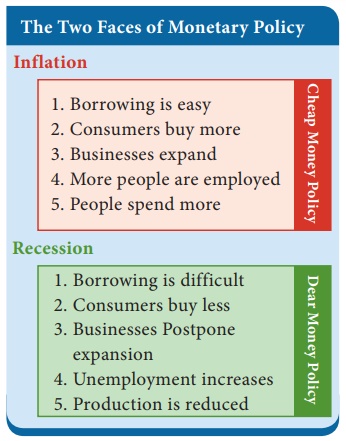 The monetary policy in developed economies has to serve the function of stabilization and maintaining proper equilibrium in the economic system. But in case of underdeveloped countries, the monetary policy has to be more dynamic so as to meet the requirements of an expanding economy by creating suitable conditions for economic progress. It is now widely recognized that monetary policy can be a powerful tool of economic transformation. 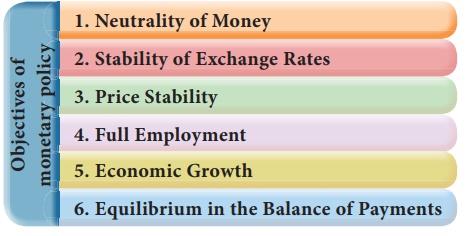 Economists like Wicksteed, Hayek and Robertson are the chief exponents of neutral money. They hold the view that monetary authority should aim at neutrality of money in the economy. Monetary changes could be the root cause of all economic fluctuations. According to neutralists, the monetary change causes distortion and disturbances in the proper operation of the economic system of the country.

It must be noted that if there is instability in the exchange rates, it would result in outflow or inflow of gold resulting in unfavorable balance of payments. Therefore, stable exchange rates are advocated.

Economists like Crustave Cassel and Keynes suggested price stabilization as a main objective of monetary policy. Price stability is considered the most genuine objective of monetary policy. Stable prices repose public confidence. It promotes business activity and ensures equitable distribution of income and wealth. As a consequence, there is general wave of prosperity and welfare in the community.

But it is admitted that price stability does not mean ‘price rigidity’ or price stagnation’. A mild increase in the price level provides a tonic for economic growth. It keeps all virtues of a stable price.

During world depression, the problem of unemployment had increased rapidly. It was regarded as socially dangerous, economically wasteful and morally deplorable. Thus, full employment was considered as the main goal of monetary policy. With the publication of Keynes’ General Theory of Employment, Interest and Money in 1936, the objective of full employment gained full support as the chief objective of monetary policy.

Economic growth is the process whereby the real per capita income of a country increases over a long period of time. It implies an increase in the total physical or real output, production of goods for the satisfaction of human wants.

Therefore, monetary policy should promote sustained and continuous economic growth by maintaining equilibrium between the total demand for money and total production capacity and further creating favourable conditions for saving and investment. For bringing equality between demand and supply, flexible monetary policy is the best course.

6. Equilibrium in the Balance of Payments

Equilibrium in the balance of payments is another objective of monetary policy which emerged significant in the post war years. This is simply due to the problem of international liquidity on account of the growth of world trade at a more faster speed than the world liquidity.