Approximately 2 L of gastric secretions (gastric juice) are pro-duced each day. Both nervous and hormonal mechanisms regulate gastric secretions. The neural mechanisms involve central nervous system (CNS) reflexes integrated within the medulla oblongata. Higher brain centers can influence these reflexes. Local reflexes are integrated within the enteric plexus in the wall of the diges-tive tract and do not involve the CNS. Hormones produced by the stomach and intestine help regulate stomach secretions. 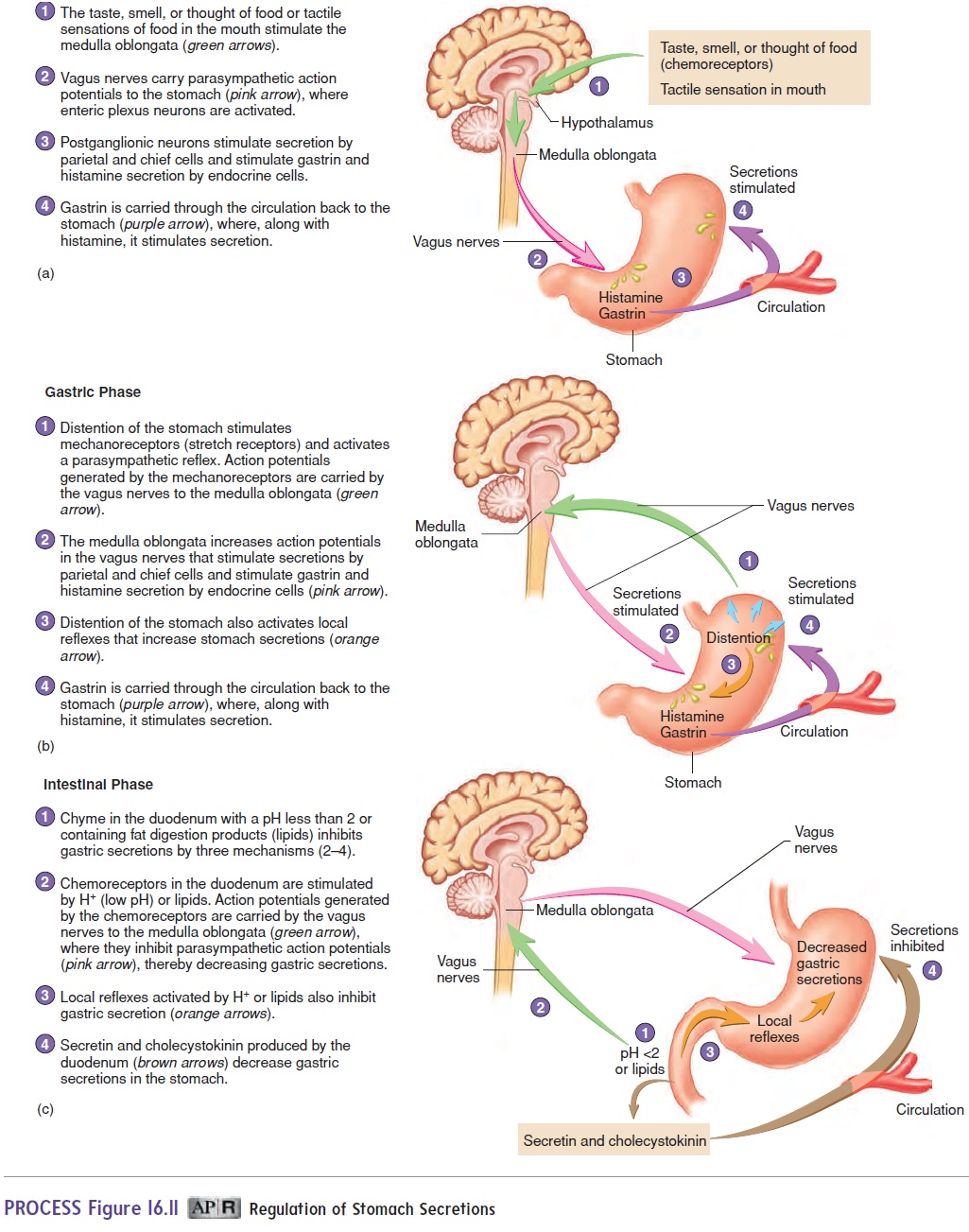 In the cephalic (se-fal′ ik; kephale, head) phase (figure 16.11a), sensations of taste, the smell of food, stimulation of tactile receptors during the process of chewing and swallowing, and pleasant thoughts of food stimulate centers within the medulla oblongata that influence gastric secretions. Action potentials are sent from the medulla oblongata along parasympathetic axons within the vagus nerves to the stomach. Within the stomach wall, the preganglionic neurons stimulate postganglionic neurons in the enteric plexus. The postganglionic neurons stimulate secretory activity in the cells of the stomach mucosa, causing the release of hydrochloric acid, pepsin, mucus, and intrinsic factor. The neurons also stimulate the release of gastrin and histamine from endocrine cells. Gastrin (gas′ trin) is a hormone that enters the circulation and is carried back to the stomach, where it stimulates additional secretory activity (table 16.2). Histamine is both a paracrine chem-ical signal that acts locally and a hormone that enters the blood to stimulate gastric gland secretory activity. Histamine is the most potent stimulator of hydrochloric acid secretion. Drugs that block the actions of histamine can lower acid levels.

The gastric phase is the period during which the greatest volume of gastric secretion occurs (figure 16.11b). The gastric phase is activated by the presence of food in the stomach. During the gastric phase, the food in the stomach is mixed with gastric secretions. Distention of the stomach stimulates stretch recep-tors. Action potentials generated by these receptors activate CNS reflexes and local reflexes, resulting in the cascade of events that increases secretion, as in the cephalic phase. Peptides, produced by the action of pepsin on proteins, stimulate the secretion of gastrin, which in turn stimulates additional hydrochloric acid secretion.

To summarize, once gastric acid secretion begins, further secre-tion is controlled by negative-feedback loops involving nerves and hormones. First, during the gastric phase, high acid levels in the stomach trigger a decrease in additional acid secretion. Second, dur-ing the intestinal phase, acidic chyme entering the duodenum trig-gers a decrease in gastric acid secretion. These negative-feedback loops ensure that the acidic chyme entering the duodenum is neu-tralized, which is required for the digestion of food by pancreatic enzymes and for the prevention of peptic ulcer formation.