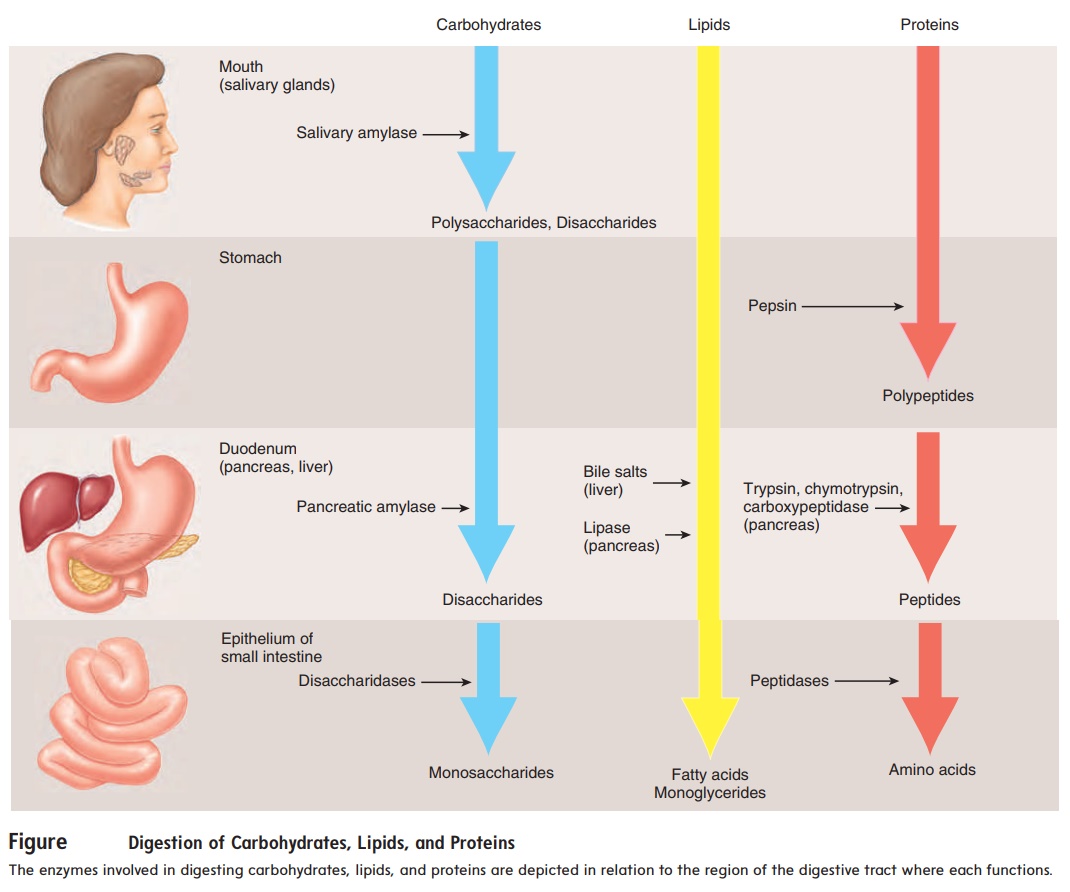 Digestion is the breakdown of food to molecules that are smallenough to be absorbed into the circulation. Mechanical digestionbreaks large food particles into smaller ones. Chemical digestion involves the breaking of covalent chemical bonds in organic mol­ ecules by digestive enzymes. Carbohydrates break down into mono-saccharides, lipids break down into fatty acids and monoglycerides, and proteins break down into amino acids (figure 16.22). 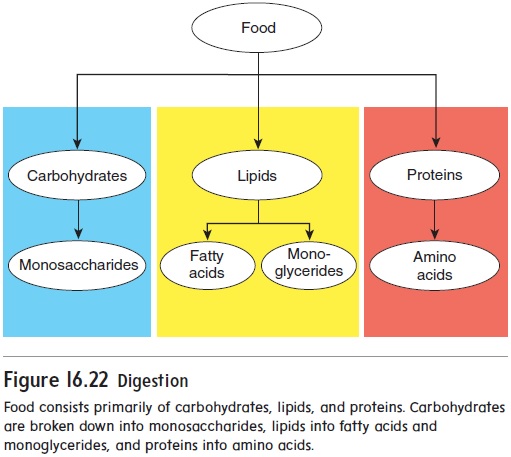 Ingested carbohydrates (kar-bō-hı̄′ drāts) consist primarily of starches, cellulose, sucrose (table sugar), and small amounts of fructose (fruit sugar) and lactose (milk sugar). Starches, cel-lulose, sucrose, and fructose are derived from plants, and lactose is derived from animals. Polysaccharides (pol-ē-sak′ ă-rı̄dz) are large carbohydrates, such as starches, cellulose, and glycogen, that consist of many sugars linked by chemical bonds. Starch is an energy-storage molecule in plants. Cellulose forms the walls of plant cells. Glycogen is an energy-storage molecule in animals and is contained in muscle and in the liver. When uncooked meats are processed or stored, the glycogen is broken down to glucose, which is further broken down, so that little, if any, glycogen remains. Therefore, almost all dietary carbohydrates come from plants. Starch is broken down byenzymes. Cellulose is a polysaccharide that is not digested but is important for providing fiber in the diet. 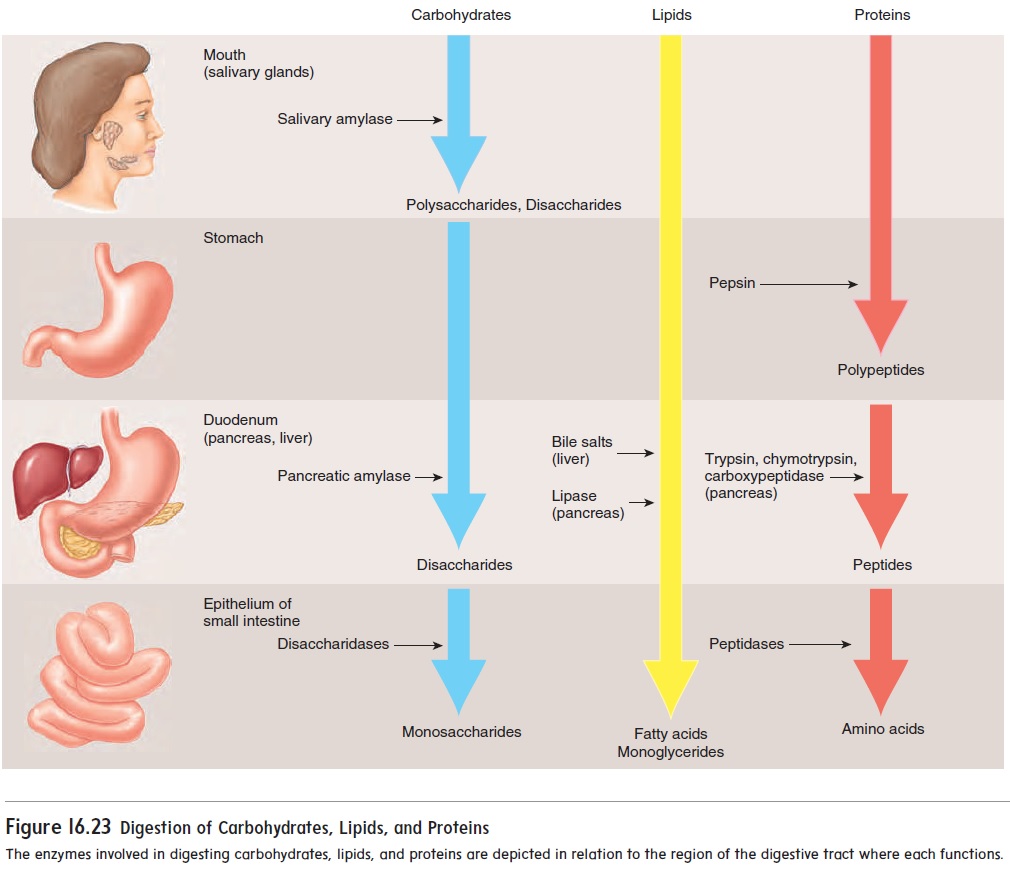 Salivary amylase begins the digestion of carbohydrates inthe mouth (figure 16.23). The carbohydrates then pass to the stomach, where digestion continues until the food is well mixed with acid, which inactivates salivary amylase. In the duodenum, pancreatic amylase continues the digestion of carbohydrates, andabsorption begins. The amylases break down polysaccharides to disaccharides(dı̄-sak′ ă-rı̄dz; two sugars chemically linked;). A group of enzymes called disaccharidases that are bound to the microvilli of the intestinal epithelium break down the disaccharides to monosaccharides. One disaccharidase is lac-tase, which breaks down lactose (milk sugar); many people have heard of lactase, because lack of it leads to lactose intolerance. Lactase is made at birth; however, in 5–15% of the European-American population and 80–90% of the African-American and Asian-American populations, lactase synthesis sharply declines 3–4 years after weaning. In the absence of lactase, ingestion of dairy products causes intestinal cramping, bloating, and diarrhea. An increasing selection of foods for lactose-intolerant people can be found in the supermarket.

The monosaccharides (mon-ō-sak′ ă-rı̄dz; single sugars) glu-cose, galactose, and fructose are taken up through the intestinal epithelial cells (figure 16.24). Cotransport of the major monosaccharide, glucose, and Na+ is driven by a Na+ concentration gradient that is established by the sodium-potassium pump. Diffusion of Na+ down its concentration gradient provides the energy to trans-port glucose across the cell membrane. This mechanism is also used for galactose transport, while fructose is taken up by facilitated diffusion . Once inside the intestinal epithelial cell, monosaccharides are transported into the capillaries of the intestinal villi and are carried by the hepatic portal system to the liver. Liver cells convert different types of monosaccharides to glucose, which then leaves the liver via the circulation to be distributed throughout the body. Glucose enters the cells by facilitated diffusion. The rate of glucose transport into most types of cells is greatly influenced by insulin and can increase tenfold in the presence of insulin. Withoutinsulin, glucose enters most cells very slowly.

Lipase, secreted by the pancreas, digests lipid molecules (seefigure 16.23). The primary products of this digestive process are fatty acids and monoglycerides.

In the intestine, bile salts aggregate around small droplets of digested lipids to form micelles (mi-selz′ , mı̄-selz′ ; small morsels) (figure 16.25). The hydrophobic (water-fearing) ends of the bile salts are directed toward the lipid particles, and the hydrophilic (water-loving) ends are directed outward, toward the water envi-ronment. When a micelle comes in contact with the epithelial cells of the small intestine, the lipids, fatty acids, and monoglyceride molecules pass, by simple diffusion, from the micelles through the cell membranes of the epithelial cells.

Once inside the intestinal epithelial cells, the fatty acids and monoglycerides are recombined to form triglycerides. These, andother lipids, are packaged inside a protein coat. The packaged lipid-protein complexes, or lipoproteins, are called chylomicrons (k -l̄o -mi′ kronz). Chylomicrons leave the epithelial cells and enter the lacteals, lymphatic capillaries within the intestinal villi. Lymph containing large amounts of absorbed lipid is called chyle (kı̄ l; milky lymph). The lymphatic system carries the chyle to the bloodstream. Chylomicrons are transported to the liver, where the lipids are stored, converted into other molecules, or used as energy. They are also transported to adipose tissue, where they are stored until an energy source is needed elsewhere in the body. Other lipoproteins, called low-density lipoproteins (LDLs) and high-density lipoproteins (HDLs), transport cholesterol and fats in theblood (figure 16.26). 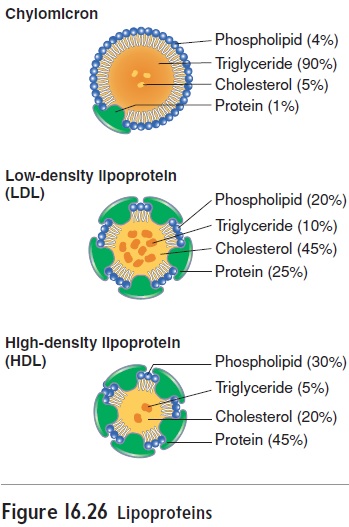 Proteins are chains of amino acids. They are found in most of theplant and animal products we eat. Pepsin is an enzyme secreted by the stomach that breaks down proteins, producing shorter amino acid chains called polypeptides (see figure 16.23). Only about 10–20% of the total ingested protein is digested by pepsin. After the remaining proteins and polypeptide chains leave the stomach and enter the small intestine, the enzymes trypsin, chymotrypsin, and carboxypeptidase, produced by the pancreas in their inactive formsand activated in the intestine, continue the digestive process. These enzymes produce small peptides, which are further broken down into tripeptides (three amino acids), dipeptides (two amino acids), or single amino acids by digestive enzymes called peptidases. The peptidases are bound to the microvilli of the small intestine.

Absorption of tripeptides, dipeptides, or individual amino acids occurs through the intestinal epithelial cells by various cotransport mechanisms. Many, but not all, amino acids are taken up by cotrans-port with Na+ similar to glucose cotransport (figure 16.27). Within the intestinal epithelial cells, tripeptides and dipeptides are broken down into amino acids. The amino acids then enter blood capillaries in the villi and are carried by the hepatic portal vein to the liver. The amino acids may be modified in the liver, or they may be released into the bloodstream and distributed throughout the body.

Amino acids are actively transported into the various cells of the body. This transport is stimulated by growth hormone and insulin. Most amino acids are used as building blocks to form new proteins, but some may be metabolized, with a portion of the released energy used to produce ATP. The body cannot store excess amino acids. Instead, they are partially broken down and used to synthesize glycogen or lipids, which can be stored. The body can store only small amounts of glycogen, so most of the excess amino acids are converted to lipids.

Approximately 9 L of water enter the digestive tract each day (figure 16.28). We ingest about 2 L in food and drink, and the remaining 7 L are from digestive secretions. Approximately 92% of that water is absorbed in the small intestine, about 7% is absorbed in the large intestine, and about 1% leaves the body in the feces. Water can move in either direction by osmosis across the wall of the digestive tract. The direction of its movement is determined by osmotic gradients across the epithelium. When the chyme is diluted, water moves out of the intestine into the blood. If the chyme is concentrated and contains little water, water moves into the lumen of the small intestine. 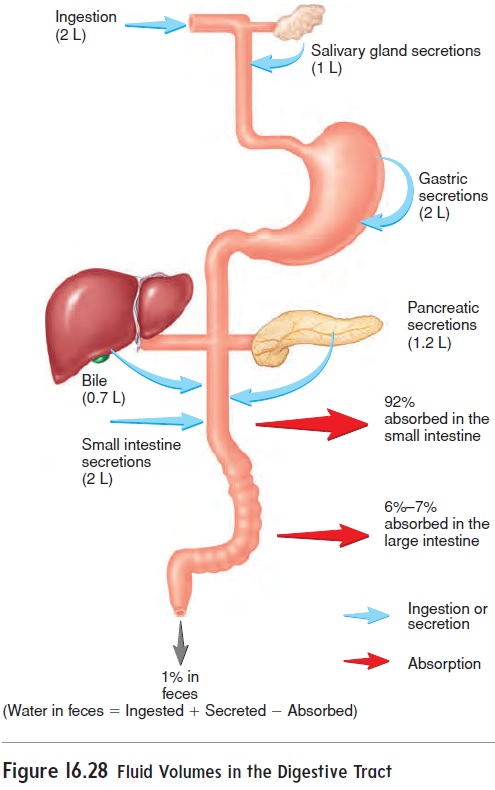