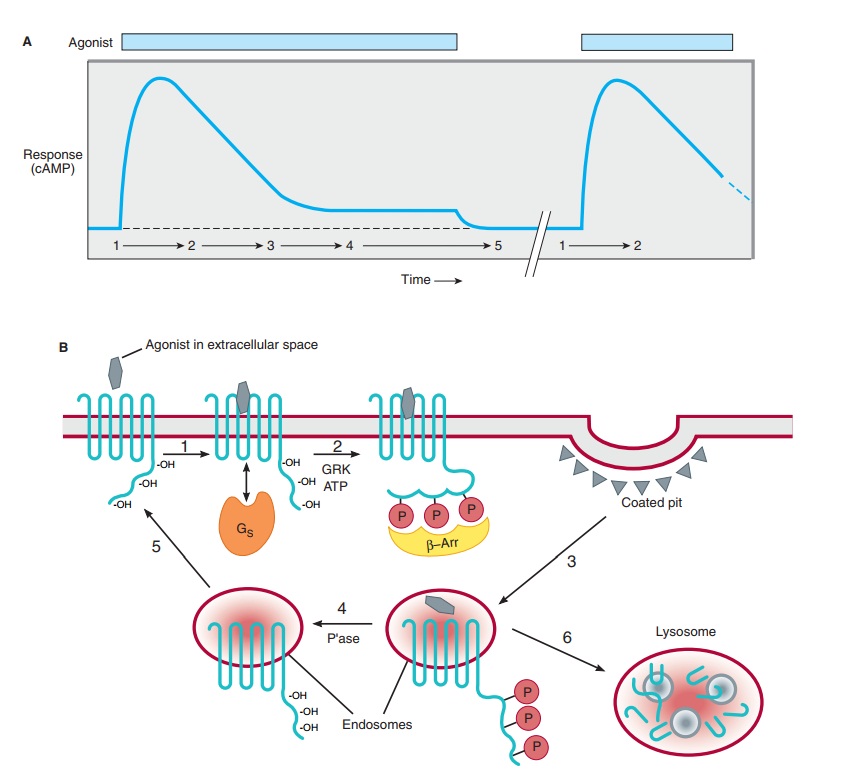 G protein-mediated responses to drugs and hormonal agonists often attenuate with time (Figure 2–12, top). After reaching an initial high level, the response (eg, cellular cAMP accumulation, Na+ influx, contractility, etc) diminishes over seconds or minutes, even in the continued presence of the agonist. This “desensitization” is often rapidly reversible; a second exposure to agonist, if provided a few minutes after termination of the first exposure, results in a response similar to the initial response.

Many GPCRs are regulated by phosphorylation, as illustrated by rapid desensitization of the β adrenoceptor. The agonist-induced change in conformation of the receptor causes it to bind, activate, and serve as a substrate for a family of specific receptor kinases, called G protein-coupled receptor kinases (GRKs). The activated GRK then phosphorylates serine residues in the receptor’s carboxyl terminal tail (Figure 2-12, panel B). The presence of phosphoser-ines increases the receptor’s affinity for binding a third protein, β-arrestin. Binding of β-arrestin to cytoplasmic loops of the recep-tor diminishes the receptor’s ability to interact with Gs, thereby reducing the agonist response (ie, stimulation of adenylyl cyclase). Upon removal of agonist, GRK activation is terminated, and the desensitization process can be reversed by cellular phosphatases. For β adrenoceptors, and many other GPCRs, β-arrestin bind-ing also accelerates endocytosis of receptors from the plasma membrane. Endocytosis of receptors promotes their dephosphory-lation by a receptor phosphatase that is present at high concentra-tion on endosome membranes, and receptors then return to the plasma membrane. This helps explain the ability of cells to recover receptor-mediated signaling responsiveness very efficiently after agonist-induced desensitization. Several GPCRs—includingβ  adrenoceptors if persistently activated—instead traffic to lyso somes after endocytosis and are degraded. This process effectively attenuates (rather than restores) cellular responsiveness, similar to the process of down-regulation described above for the epidermal growth factor receptor. Thus, depending on the particular receptor and duration of activation, endocytosis can contribute to either rapid recovery or prolonged attenuation of cellular responsiveness(Figure 2–12). 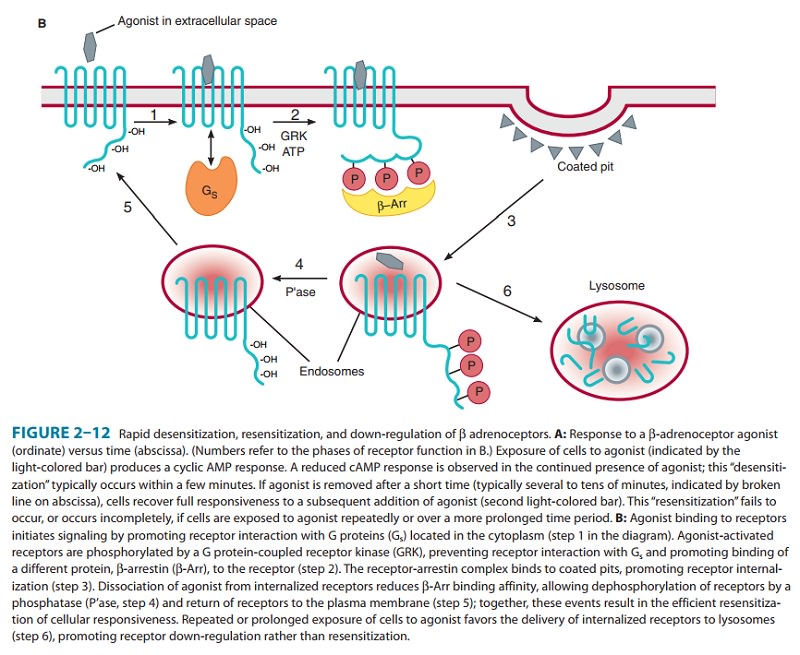