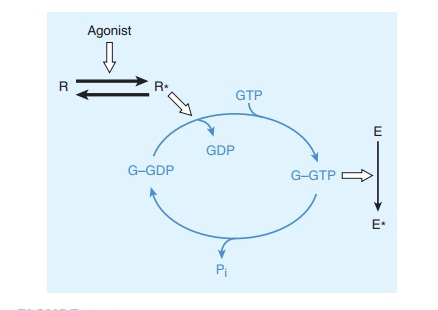 Many extracellular ligands act by increasing the intracellular con-centrations of second messengers such as cyclic adenosine-3′,5′-monophosphate (cAMP), calcium ion, or the phosphoinositides.

Many extracellular ligands act by increasing the intracellular con-centrations of second messengers such as cyclic adenosine-3′,5′-monophosphate (cAMP), calcium ion, or the phosphoinositides (described below). In most cases, they use a transmembrane sig-naling system with three separate components. First, the extracel-lular ligand is selectively detected by a cell-surface receptor. The receptor in turn triggers the activation of a G protein located on the cytoplasmic face of the plasma membrane. The activated G protein then changes the activity of an effector element, usually an enzyme or ion channel. This element then changes the concentra-tion of the intracellular second messenger. For cAMP, the effector enzyme is adenylyl cyclase, a membrane protein that converts intracellular adenosine triphosphate (ATP) to cAMP. The corre-sponding G protein, Gs, stimulates adenylyl cyclase after being activated by hormones and neurotransmitters that act via specific Gs-coupled receptors. There are many examples of such receptors, including β adrenoceptors, glucagon receptors, thyrotropin recep-tors, and certain subtypes of dopamine and serotonin receptors. 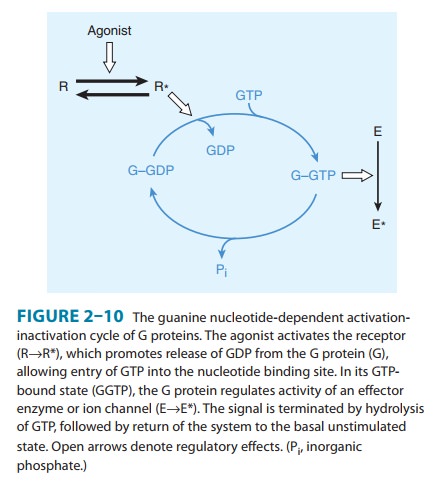 Gs and other G proteins use a molecular mechanism that involves binding and hydrolysis of GTP (Figure 2–10). This mechanism allows the transduced signal to be amplified. For example, a neurotransmitter such as norepinephrine may encoun-ter its membrane receptor for only a few milliseconds. When the encounter generates a GTP-bound Gs molecule, however, the duration of activation of adenylyl cyclase depends on the longevity of GTP binding to Gs rather than on the receptor’s affinity for norepinephrine. Indeed, like other G proteins, GTP-bound Gs may remain active for tens of seconds, enormously amplifying the original signal. This mechanism also helps explain how signaling by G proteins produces the phenomenon of spare receptors. The family of G proteins contains several functionally diverse sub-families (Table 2–1), each of which mediates effects of a particular set of receptors to a distinctive group of effectors. Note that an endogenous ligand (eg, norepinephrine, acetylcholine, serotonin, many others not listed in Table 2–1) may bind and stimulate receptors that couple to different subsets of G proteins. The appar-ent promiscuity of such a ligand allows it to elicit different G protein-dependent responses in different cells. For instance, the body responds to danger by using catecholamines (norepinephrine and epinephrine) both to increase heart rate and to induce con-striction of blood vessels in the skin, by acting on Gs-coupled β adrenoceptors and Gq-coupled α1 adrenoceptors, respectively. Ligand promiscuity also offers opportunities in drug development (see Receptor Classes & Drug Development in the following text).

Receptors coupled to G proteins are often called “G protein-coupled receptors” (GPCRs), “seven-transmembrane” (7-TM), or “serpentine” receptors. GPCRs make up the largest receptor fam-ily and are so-named because the receptor polypeptide chain “snakes” across the plasma membrane seven times (Figure 2–11). Receptors for adrenergic amines, serotonin, acetylcholine (musca-rinic but not nicotinic), many peptide hormones, odorants, and even visual receptors (in retinal rod and cone cells) all belong to the GPCR family. All were derived from a common evolutionary precursor. A few GPCRs (eg, GABAB and metabotropic glutamate receptors) require stable assembly into either homodimers (com-plexes of two identical receptor polypeptides) or heterodimers (complexes of different isoforms) for functional activity. However, in contrast to tyrosine kinase and cytokine receptors, most GPCRs are thought to be able to function as monomers.

All GPCRs transduce signals across the plasma membrane in essentially the same way. Often the agonist ligand—eg, a cate-cholamine or acetylcholine—is bound in a pocket enclosed by the transmembrane regions of the receptor (as in Figure 2–11). The resulting change in conformation of these regions is trans-mitted to cytoplasmic loops of the receptor, which in turn acti-vate the appropriate G protein by promoting replacement of GDP by GTP, as described above. Amino acids in the third cyto-plasmic loop of the GPCR polypeptide are generally thought to play a key role in mediating receptor interaction with G proteins (shown by arrows in Figure 2–11). The structural basis for ligand binding to β adrenoceptors was determined recently using X-ray crystallography. 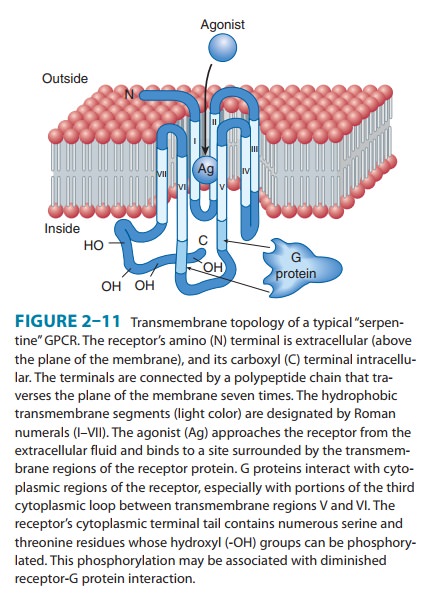