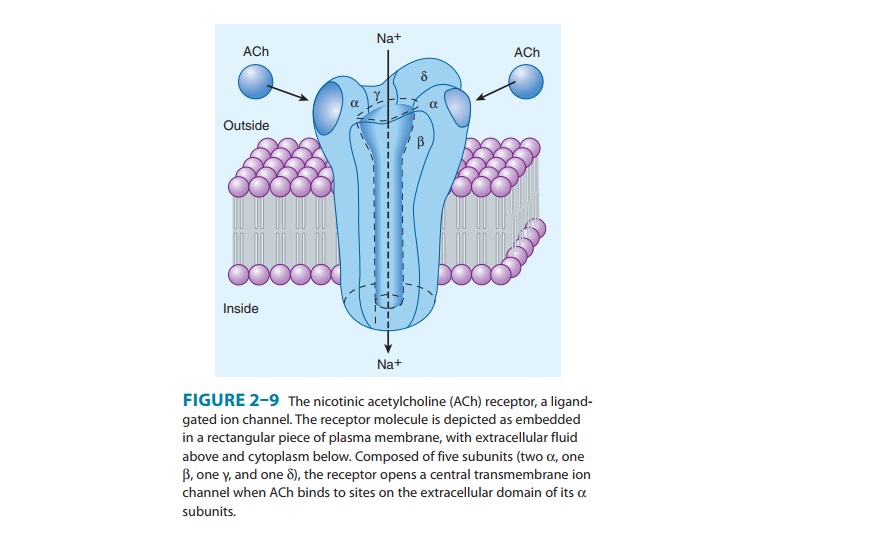 Many of the most useful drugs in clinical medicine act by mimicking or blocking the actions of endogenous ligands that regulate the flow of ions through plasma membrane channels.

Many of the most useful drugs in clinical medicine act by mimicking or blocking the actions of endogenous ligands that regulate the flow of ions through plasma membrane channels. The natural ligands are acetylcholine, serotonin, GABA, and glutamate. All of these agents are synaptic transmitters.

Each of their receptors transmits its signal across the plasma membrane by increasing transmembrane conductance of the relevant ion and thereby altering the electrical potential across the membrane. For example, acetylcholine causes the opening of the ion channel in the nicotinic acetylcholine receptor (nAChR), which allows Na+ to flow down its concentration gradient into cells, producing a localized excitatory postsynaptic potential—a depolarization.

The nAChR is one of the best characterized of all cell-surface receptors for hormones or neurotransmitters (Figure 2–9). One form of this receptor is a pentamer made up of four different polypeptide subunits (eg, two α chains plus one β, one γ, and onechain, all with molecular weights ranging from 43,000 to 50,000). These polypeptides, each of which crosses the lipidbilayer four times, form a cylindrical structure that is 8 nm in diameter. When acetylcholine binds to sites on the α subunits, a conformational change occurs that results in the transient opening of a central aqueous channel through which sodium ions penetrate from the extracellular fluid into the cell. 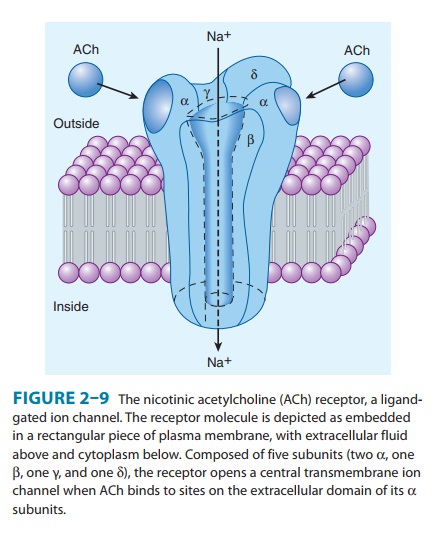 The time elapsed between the binding of the agonist to a ligand-gated channel and the cellular response can often be mea-sured in milliseconds. The rapidity of this signaling mechanism is crucially important for moment-to-moment transfer of informa-tion across synapses. Ligand-gated ion channels can be regulated by multiple mechanisms, including phosphorylation and endocy-tosis. In the central nervous system, these mechanisms contribute to synaptic plasticity involved in learning and memory.

Voltage-gated ion channels do not bind neurotransmitters directly but are controlled by membrane potential; such channels are also important drug targets. For example, verapamil inhibits voltage-gated calcium channels that are present in the heart and in vascular smooth muscle, producing antiarrhythmic effects and reducing blood pressure without mimicking or antagonizing any known endogenous transmitter.