Several biologic ligands are sufficiently lipid-soluble to cross the plasma membrane and act on intracellular receptors.

Several biologic ligands are sufficiently lipid-soluble to cross the plasma membrane and act on intracellular receptors. One class of such ligands includes steroids (corticosteroids, mineralocorticoids, sex steroids, vitamin D), and thyroid hormone, whose receptors stimulate the transcription of genes by binding to specific DNA sequences near the gene whose expression is to be regulated. Many of the target DNA sequences (called response elements) have been identified.These “gene-active” receptors belong to a protein family that evolved from a common precursor. Dissection of the receptors by recombinant DNA techniques has provided insights into their molecular mechanism. For example, binding of glucocorticoid hormone to its normal receptor protein relieves an inhibitory constraint on the transcription-stimulating activity of the protein. Figure 2–6 schematically depicts the molecular mechanism of glucocorticoid action: In the absence of hormone, the receptor is bound to hsp90, a protein that appears to prevent normal folding of several structural domains of the receptor. Binding of hormone to the ligand-binding domain triggers release of hsp90. This allows the DNA-binding and transcription-activating domains of the receptor to fold into their functionally active conformations, so that the activated receptor can initiate transcription of target genes. 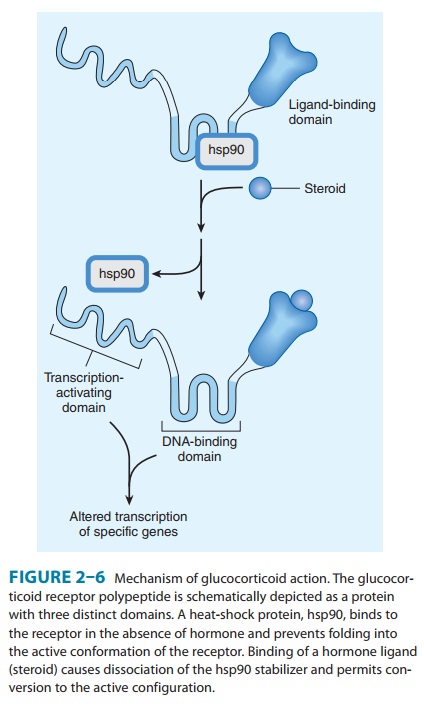 The mechanism used by hormones that act by regulating gene expression has two therapeutically important consequences:

1. All of these hormones produce their effects after a characteristic lag period of 30 minutes to several hours—the time required for the synthesis of new proteins. This means that the gene-active hormones cannot be expected to alter a pathologic state within minutes (eg, glucocorticoids will not immediately relieve the symptoms of acute bronchial asthma).

2. The effects of these agents can persist for hours or days after the agonist concentration has been reduced to zero. The persis-tence of effect is primarily due to the relatively slow turnover of most enzymes and proteins, which can remain active in cells for hours or days after they have been synthesized. Consequently, it means that the beneficial (or toxic) effects of a gene-active hormone usually decrease slowly when administration of the hormone is stopped.