Most radiocontrast agents in use are iodinated contrast material which may be ionic or non-ionic compounds.

Most radiocontrast agents in use are iodinated contrast material which may be ionic or non-ionic compounds.

·              Higher-osmolality contrast agents (HOCA)—These are mostly ionic compounds and have been in use for several decades. They

are relatively cheap and safe, though occasionally severe adverse reactions can occur.

·              Lower-osmolality contrast agents (LOCA)—These are mostly non-ionic compounds which cause less discomfort and are associated with a lower incidence of severe adverse reac-tions. However they are quite expensive.

Contrast radiography of GI tract: These are nonabsorbable agents which form a homogenous coat on the GI mucosa and do not interact with GI secretions.

––  Diatrizoate. Myelography: Agents for this are non-ionic, water soluble, and miscible with CSF.

Lymphography, lymphangiography: These agents are water-insoluble with high radiodensity.

–– Gadolinium, manganese, and iron as the aminopo-lycarboxylate chelates and gadopentetic acid.

Cholecystography, cholangiography: These agents are preferentially excreted in the bile after absorption from GI tract.

Contrast media are known for producing severe reactions, though they are relatively infrequent (1 or 2 per 1000 exami-nations) . Mild to moderate reactions are more common, but subside on their own.

–– Cerebral or renal disease in patient over the age of 50 years.

––  History of reaction to contrast material.

–– Previous study in which large dose of contrast material was used.

–– Moderate: moderate intensity of any of the above manifestations, with/without the following—pulse changes, hypo- or hypertension, dyspnoea, bron-chospasm, and laryngospasm. 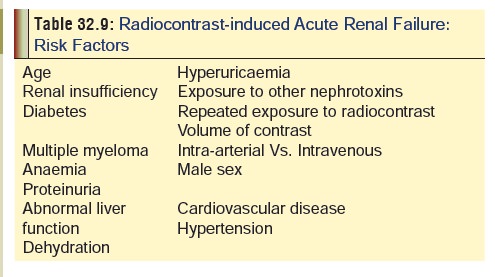 ·              Clinically, there is acute tubular necrosis, presenting with oliguria within 24 hours of exposure to the agent.

A formula has been suggested for calculating the maximum dose of contrast material that can be given safely without compromising renal function:

·     Thromboembolic phenomena: Serious thromboembolic events causing myocardial infarction and stroke have occurred during angiographic procedures with contrast media. Careful intravascular administration is necessary to minimise such complications. The following is a list of precautions:

o     Continuous flushing with saline solution to prevent mixing of blood and contrast media, premedication with heparin, and use of plastic syringes are important safety measures when using non-ionic contrast media.

o     Non-ionic contrast media should not be mixed with blood before intravascular injection.

·              Thyroid complications: Since radiocontrast agents invar- iably contain iodides which cannot be metabolised by deiodinating enzymes, thyrotoxicosis may be induced in susceptible patients. Prophylactic treatment with sodium perchlorate 1.2 grams administered 30 minutes before, and 6 to 8 hours after exposure, has been suggested.

·              Cancer induction: Thorotrast, a contrast agent which contains 25% colloidal thorium dioxide has been associated with malignancies.

·              Precipitation of mumps: Iodide mumps has occasionally been observed in patients who were administered iodinated contrast agents.

·      Inadvertent administration of ionic contrast agents such as diatrizoate or iodamine, instead of iopanidol, by the intrath-ecal route, has resulted in fatalities.

·      In the past, methiodal sodium was commonly used for myelography. Because of high incidence of neurotoxic adverse reactions, other compounds were subsequently introduced, e.g. iothalamate meglumine and iocarmate.

·      Overdose with iothalamate meglumine during excretory urography can lead to cardiopulmonary failure.

·              Convulsions must be treated with IV, diazepam,phenytoin, phenobarbitone, intubation, and intensive medical care.

·              If accidental intrathecal injection of ionic contrastmedia is suspected, the patient should not be permitted to lie down.

·              Patients with a history of radiocontrast medium-related oedema should be given prophylactic corticosteroids.

2)  To decrease the incidence of side effects after myelography, the following have been suggested:

3)  Overdose with iopanoic acid can be treated with IV fluids, alkalinisation of urine, and cholestyramine (said to be a chelator of iopanoic acid). Cardiac and respiratory moni-toring are mandatory.

a)           Patients with pre-existing renal impairment should be given 0.45% saline IV, for 12 hours before and 12 hours after administration of contrast agents.

b)          Low-osmolality contrast agents are preferable to high- osmolality agents.

c)           Pre-treatment with corticosteroids and antihistamines (with or without adrenaline), has been suggested to minimise reactions to contrast agents.