Folic acid antagonists or antifolates, hold a special place in anticancer chemotherapy, since they were the first to produce striking remissions in leukaemia, and the first cure for a solid tumour (choriocarcinoma). Methotrexate even today remains one of the most important of the antifolates, and is used in the treatment of lymphoma, lymphocytic leukaemia, breast cancer, small cell carcinoma, rheumatoid arthritis, and trophoblastic diseases. Methotrexate or MTX is also used as an immunosup-pressive in organ transplantation.

Methotrexate (MTX) is rapidly absorbed orally if admin-istered in small doses. Large doses are incompletely absorbed, and therefore should be given intravenously. In the latter case, the drug disappears from plasma in a triphasic fashion. The first phase is a rapid distributive phase, which is followed by a second phase of renal clearance (half-life of 2 to 3 hours), and a terminal phase of half-life of 8 to 10 hours. If the terminal phase is unduly prolonged, as in renal failure, there can be severe toxic effects. Renal excretion occurs through a combina-tion of glomerular filtration and tubular secretion. Therefore, concomitant administration of drugs that reduce renal blood flow, or which delay drug excretion, or are nephrotoxic, can lead to severe myelosuppression.

Overdose can result in pancytopenia and severe mucositis.

Mortality from high-dose MTX therapy is about 6%, and occurs primarily when the patient is not monitored regularly with MTX levels. Treatment involves gastric lavage if the victim is seen early. Activated charcoal is not effective. Good urinary output (1 to 3 ml/kg/hr) must be maintained, and the urine may be alkalinised with sodium bicarbonate. Folinic acid or leucovorin is the specific antidote for MTX. It reverses bone marrow and GI toxicity, but unfortunately does not resolve neurotoxicity. An initial dose of leucovorin estimated to produce the same plasma concentration as the MTX dose should be given as soon as possible. The toxic threshold for MTX is reported to be 2 × 10-8 mol/L (i.e. 0.02 mmol/L or 20 nmol/L). The dose of leucovorin should be repeated every 3 to 6 hours until the MTX level falls below 1 × 10-8 mol/L. Leucovorin therapy may have to be continued for 12 to 24 doses or longer. In all but the most severe cases of MTX, a leucovorin dose of 100 mg/m2 every 6 hours should be effec-tive. Haemoperfusion and haemodialysis have been reported to be beneficial in MTX overdose. Carboxypeptidase G2 is a new agent capable of inactivating MTX by cleaving its terminal glutamate group. However it can cause hypersen-sitivity reactions because of its bacterial origin. Granulocyte colony stimulating factor (G -CSF) has been used successfully in some patients with MTX overdose. The suggested dosage of G-CSF is 125 mcg/kg/day.

Intrathecal MTX overdose must be treated as follows:

·              CSF drainage must be accompanied by ventriculolumbar perfusion.

The 5-FU requires enzymatic conversion to the nucleotide (ribosylation and phosphorylation) in order to exert its cytotoxic activity. It is generally used to treat patients with metastatic carcinomas of the breast and GI tract. It is also beneficial in hepatoma and carcinoma of ovary, cervix, urinary bladder, pros-tate, pancreas, and oropharyngeal areas. 5-FU is administered parenterally and is subsequently inactivated by dihydropyrimi-dine dehydrogenase, deficiency of which can lead to profound toxicity even with conventional doses.

Cytarabine is the most effective antimetabolite used in the treatment of acute myelocytic leukaemia. It has to be first “acti-vated” by conversion to the 5/-monophosphate nucleotide which is catalysed by deoxycytidine kinase. This is then converted to the diphosphate and triphosphate nucleotides which cause potent inhibition of DNA synthesis in cells.

Cytarabine is usually given IV or intrathecally. Less than 10% of the injected dose is excreted unchanged in the urine, while most appears as the inactive, deaminated product arabi-nosyl uracil.

Mercaptopurine is an important drug in the treatment of leukaemias, especially acute leukaemia in children. It also has immunosuppressive activity, but its imidazoyl derivative azathioprine is more effective in this regard. Mercaptopurine is usually given orally, though the bioavailability by this route is relatively low.

Thioguanine is especially useful in the treatment of acute granulocytic leukaemia when given along with cytarabine. It is generally administered orally, though absorption is incomplete and erratic by this route. Toxic effects include bone marrow depression, GI distress and hepatic damage.

The vinca alkaloids are obtained from the periwinkle plant (Vinca rosea) (Fig 32.6), which is a type of myrtle. Important alkaloids include vinblastine, vincristine, vindesine, and vinorelbine. They are mainly employed in the treatment of lymphomas, Hodgkin’s disease, acute leukaemias, and certain solid tumours. Only vinorelbine can be administered orally, while the others are given IV All the vinca alkaloids are extensively metabolised by the liver, and the metabolites are excreted mainly in the bile. 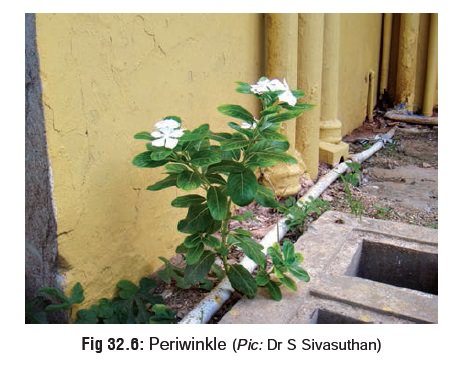 Vincristine is more neurotoxic than the other alkaloids, but is much less myelotoxic, the incidence of myelosuppres-sion being only about 5 to 10%. The following are the major adverse effects of vinca alkaloids: leukopenia, anaemia, thrombocytopenia, alopecia, constipation, nausea, vomiting, abdominal pain, haemorrhagic enterocolitis, paraesthesia, peripheral neuritis, hypertension, bronchospasm, sterility, and skin vesiculation.

Treatment involves the administration of leucovorin which is said to be beneficial in ameliorating peripheral neuropathy and myelosuppression. However there is no uniform consensus on this. There have been reports of the utility of glutamic acid, though this matter too has not yet been clearly resolved. Plasmapheresis was successfully employed in one case of vincristine overdose. Dialysis is usually ineffective.

It is obtained from Strep. verticillus and is actually a mixture of two copper-chelating peptides (bleomycin A 2 and B2). It is mainly used against squamous carcinomas of the head and neck and lungs, lymphomas, and testicular tumours. The cytotoxic action results from its ability to cause fragmentation of DNA. It is usually given parenterally (IM or IV).

It is also obtained from Streptomyces species, and is mainly used intravenously in the treatment of rhabdomyosarcoma and Wilms’ tumour in children. It is also useful in treating Ewing’s tumour and Kaposi’s sarcoma.

This is obtained from Strep. caespitosus, and is usually given intravenously in the treatment of carcinoma of colon or stomach.

Adverse effects include myelosuppression, vomiting, diarrhoea, dermatitis, fever, pulmonary fibrosis. The most dangerous adverse effect is a haemolytic uraemic syndrome which results in renal failure. Extravasation of the drug while infusing it can cause severe local injury.

These are called anthracycline antibiotics and are produced by the fungus Strep. peucetius var. Caesius. Idarubicin is actu-ally a synthetic derivative. Daunorubicin has been useful in the treatment of acute lymphocytic and granulocytic leukaemias. It is the drug of choice in acute nonlymphoblastic leukaemia (along with cytarabine). Doxorubicin is effective not only in the treatment of acute leukaemias and malignant lymphomas, but is also useful in treating a number of solid tumours.

Toxic effects include myelosuppression, thrombocytopenia, anaemia, GI disturbances, alopecia, conjunctivitis, and severe local reactions if extravasation occurs. A serious adverse effect with all anthracyclines is cardiomyopathy. Cardiac damage may be minimised by concomitant administration of dexrazoxane, an iron chelator.

Escherichia coli produces two L-asparaginase isozymes, onlyone of which (EC-2) is used as an antineoplastic agent. The purified E.coli enzyme is given IV or IM for the treatment of acute lymphoblastic leukaemia and other lymphoid cancers. Since this enzyme is a foreign protein and causes hypersen-sitivity reactions in 5 to 20% of patients, other sources have been made available including Erwinia chrysanthemi. Also a modified form of the enzyme (PEG-asparaginase) has been developed, which is obtained by conjugating it with polythylene glycol. These are much safer.

Toxic effects include nausea, vomiting, fever with chills, headache, hyperglycaemia, acute haemorrhagic pancreatitis, renal and hepatic toxicity, and coagulation defects. CNS toxicity has been reported, characterised by lethargy, stupor and coma, which is ascribed to a fall in CSF asparagines. “Asparagine rescue” infusions have been evolved to counter such serious adverse effects.

Podophyllotoxin is an extract of the mandrake or mayappleplant (Podophyllum peltatum) (Fig 32.7). Etoposide and temi-poside are semisynthetic glycosides derived from it. Etoposideis more commonly used and is given orally or intravenously for the treatment of malignant lymphomas, acute leukaemias, small cell lung cancer, and some other solid tumours. 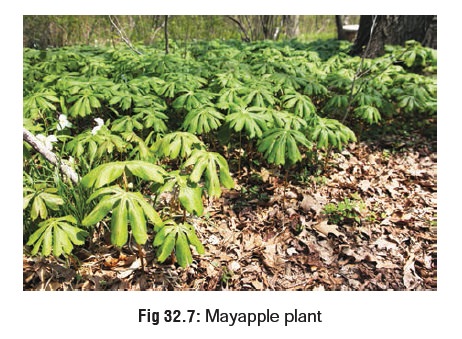 Flutamide is a non-steroidal anti-androgen which is adminis-tered orally for prostatic cancer. It acts directly on the target tissues either by blocking androgen uptake or by inhibiting cytoplasmic and nuclear binding of androgen.

Tamoxifen citrate is an anti-oestrogen that is effective as pallia-tive treatment for patients with advanced breast cancer. It is also used as an adjuvant in postmenopausal women to prevent disease recurrence. Tamoxifen is given orally.

Adverse effects include hypercalcaemia (in patients with bone metastases), thromboembolic events, hot flushes, vaginal bleeding, pruritis vulvae, GI upset, vertigo, and an increased tendency towards endometrial cancer. The last mentioned should be watched for by conducting yearly pelvic examina-tions, and specific enquiries must be made regarding pelvic discomfort for vaginal bleeding.

The cytotoxic effects of the platinum-containing compounds were first discovered in 1965, and since then many such compounds have been synthesised, of which the important ones include cisplatin, carboplatin, and iproplatin. The platinoids are used mainly in the treatment of ovarian and testicular tumours, and also cancers of head and neck, bladder, oesophagus and lung. They are usually given IV.

Chloride diuresis promotes the inactive anionic state of cisplatin and decreases the urine platinum concentration, which is helpful in nephrotoxicity during therapy.

Hydration with 0.9% sodium chloride, and an osmotic diuretic (e.g. mannitol) should be administered to achieve a high urine output (1 to 3 ml/kg/hr), for 6 to 24 hours post-exposure.

Administration of nephroprotectants post-exposure, e.g. sodium thiosulfate* (IV bolus of 4 gm/m2, followed by infu-sion of 12 gm/m2 over 6 hours), and diethyldithiocarbamate,** i.e. DDTC (4 gm/m2 as a 1.5 to 3.5-hour infusion). Disulfiram is metabolised to DDTC and can be used if the latter is not available.

Plasmapheresis is highly beneficial. Haemodialysis is effec-tive if there is renal failure.

Hydroxyurea causes cell death by specific inhibition of DNA synthesis, and is administered orally in the treatment of chronic myeloid leukaemia and some varieties of solid tumours.

Mitoxantrone is an anthraquinone related chemically to the anthracyclines. It is indicated in the treament of advanced breast cancer, lymphoma, and acute lymphocytic leukaemia. It is given IV.

Mesna is usually given as a uroprotectant to prevent haemor-rhagic cystitis resulting from therapy with cyclophosphamide and ifosfamide. It is usually given intravenously. Adverse effects include headache, tachycardia, and hypertension. Overdose can cause vomiting and diarrhoea.

·              If patient is asymptomatic even after 12 hours, discharge can be considered. However, the patient must be subse-quently followed up weekly with blood counts for at least 4 weeks. Cardiovascular follow-up is necessary for several months in the case of anthracycline overdose, on account of frequently delayed onset of cardiotoxicity.

·              Stomach wash is indicated in oral overdoses. Syrup of ipecac is not advisable since it may provoke convulsions which are frequently encountered with antineoplastic drugs.

Elimination Enhancement—While extracorporeal treat-ment methods such as haemodialysis, haemoperfusion, and exchange transfusion may help in some cases of overdose, they are generally not beneficial because most anicancer drugs possess high volumes of distribution, high protein binding values, and tendency for extensive metabolite formation.

·              Unconscious patients, and those with respiratory diffi-culty must be intubated.

·              If there is fever (with or without chills), repeated cultures should be obtained of blood, urine, and sputum. Intravenous antibiotics may be necessary if there is evidence of infection.

·              Electrolyte depletion should be corrected by replace-ment therapy with IV electrolytes. This should be accompanied by careful cardiac and respiratory moni-toring, and periodic arterial blood gas determinations.

·              Conjunctivitis can be managed with saline irrigations and ocular steroids.

·              Chemotherapy-induced vomiting is the most consistent toxic effect of almost every anticancer drug, and may be extremely severe and refractory to treatment. The usual antiemetics employed include phenothiazines (e.g. prochlorperazine), butyrophenones (e.g. droperidol), and substituted benzamides (e.g. metoclopramide). Ondansetron is as effective as metoclopramide in the prevention of chemotherapy-induced vomiting.

Dehydration must be managed with IV fluids and moni-toring of CVP.

Hypertension can be managed with mannitol or IV sodium nitroprusside.