Beta-adrenergic agonists have an important role as cardiac stimulants owing to both chronotropic and inotropic effects on the heart, and are (relatively) rarely used as bronchodilators today, so their inclusion here may appear incongruous.

This drug is used to stimulate heart rate in bradycardia or heart block as an emergency measure, and occasionally for the treatment of asthma. It is readily absorbed by inhalation and by parenteral administration. It is metabolised in the liver by catechol-o-methyltransferase (COMT) . It acts by lowering peripheral vascular resistance and mean arterial pressure, while increasing cardiac output and relaxing smooth muscles.

Dobutamine resembles dopamine in its structure, but possesses an aromatic substitute on the amino group. It is used for short-term treatment of cardiac decompensation due to depressed contractility. Infusion of dobutamine in combination with echocardiography is useful in the non-invasive assessment of patients with coronary artery disease.

Dobutamine is ineffective orally, since it is inactivated by extensive presystemic metabolism in the GI mucosa and liver. The duration of action on IV administration is just 8 to 10 minutes. It has an apparent volume of distribution of 0.20 to 0.80 L/kg. Dobutamine is metabolised in the liver by COMT, and by conjugation with glucuronic acid, and excreted in the urine. Dobutamine is a beta1-adrenergic agonist, and also induces alpha1-adrenoceptor-mediated vasoconstriction, as well as beta2-adrenoceptor-mediated vasodilation. This results in an increase in cardiac output without significantly changing the blood pressure. Unlike dopamine, it does not cause release of endogenous noradrenaline.

Treatment consists of symptomatic and supportive measures. The patient must not be discharged until serial ECGs and cardiac enzymes show no evidence of myocardial damage.

Beta2-selective adrenergic agonists are much more useful in the treatment of asthma than beta-adrenergic agonists, because unlike the latter, they do not stimulate beta1-adrenergic recep-tors in the heart that can result in serious cardiac effects. But in conditions of overdose, such selectivity may be lost. Another advantage is that these drugs have enhanced oral bioavail-ability, and hence can be given orally. However, inhalation of small doses in aerosol form affords best protection against adverse effects.

Ritodrine is more commonly used for inhibition of uterine contractions (in premature labour). Isoxsuprine is used to relieve the symptoms of central and peripheral vascular diseases such as arteriosclerosis, Buerger’s disease and Raynaud’s disease.

Beta2 agonists can be given orally, by inhalation, or by injection (SC, IM, IV). Following oral administration, most beta agonists (especially salbutamol and bitolterol) are well absorbed, with the exception of terbutaline and orciprenaline. Despite adequate absorption however, the systemic bioavailability of these drugs is generally low, because of extensive sulfation in the liver and the small intestinal wall. As a result, the oral dose of beta2 agonists needs to be 5 to 10 times greater than the parenteral dose.

·              Promotion of intracellular shift of potassium from serum, leading to a decrease in serum potassium concentration.

·              Synergistic effect with theophylline and beclomethasone.

·      Chronic overdose with salbutamol has led to the develop-ment of psychosis.

·      Decontamination—Stomach wash may be done if thepatient is seen within 4 to 6 hours.

o     Admission to intensive care unit and observation for at least 4 to 6 hours. The patient can be discharged if there is normal heart rate, absence of tremor, and presence of normal blood sugar and serum potassium.

o     Haemodialysis may be useful if there is evidence of acute renal failure.

·      Antidote—Some investigators have suggested the use ofbeta blockers (e.g. propranolol 0.01 mg/kg) for sympto-matic improvement of tremor, tachycardia, and hypoka-laemia. More cardioselective drugs such as metoprolol may be preferable in order to avoid precipitation of wheezing in asthmatic patients. However, actual efficacy of such beta blockers is controversial.

o     For serious hypokalaemia, administer potassium chlo-ride cautiously, while repeating serum potassium levels and serial ECGs. In most cases, hypokalaemia reverts to normal spontaneously. Beta blockers may help in speeding the return to normalcy, but must be used with caution in asthmatic patients.

o     In children, it is important to monitor blood glucose levels for several hours to rule out hyperglycaemia.

o     Pulmonary oedema may be precipitated if an overdose of b2 agonists has been taken by a pregnant woman in labour. This should be managed by oxygen, IV diuretics, and fluid restriction.

·     Deliberate overdose with beta agonists is not uncommon in some Western countries, but is relatively rare in India.

·     A disturbing (and unexpected) aspect of beta agonist use in the form of inhalation, has been an increase in mortality from asthma. This was first noticed with isoproterenol in the 1960s, and subsequently with salbutamol and fenoterol. Possible causes for such increased mortality may be related to the following factors:

o     Fenoterol mortality may be due to its unique formula- tion as a bromide.

Xanthine is a dioxypurine structurally related to uric acid. Theophylline, caffeine, and theobromine are methylated  xanthines. All these three alkaloids occur naturally in various plants. The leaves of Thea sinensis constitute the source of the hugely popular beverage “tea” that is drunk by half the population of the world (Fig 32.1). Tea contains caffeine and small amounts of theophylline and theobromine. The seeds of Theobroma cacao are used in the preparation of cocoa and chocolate which contain theobromine and some caffeine (Fig32.2). Coffee is extracted from the beans ofCoffea arabicaand contains mainly caffeine (Fig 32.3). Cola-flavoured drinks containing considerable amounts of caffeine are prepared from the nuts of Cola acuminata (Fig 32.4). 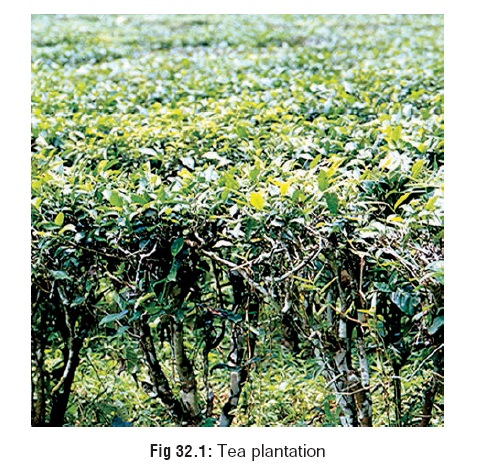 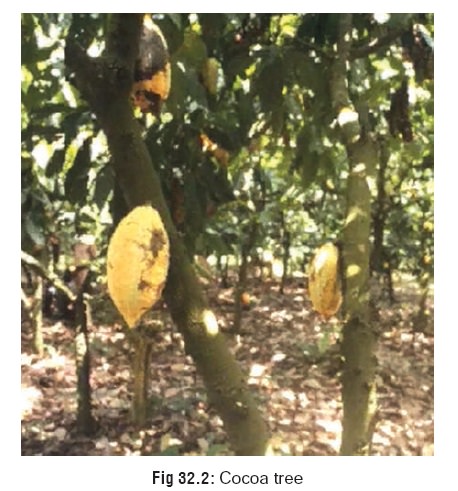 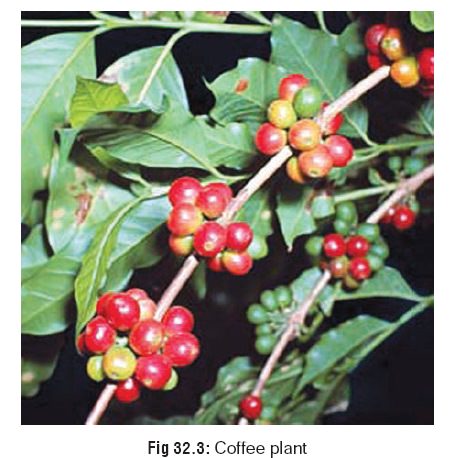 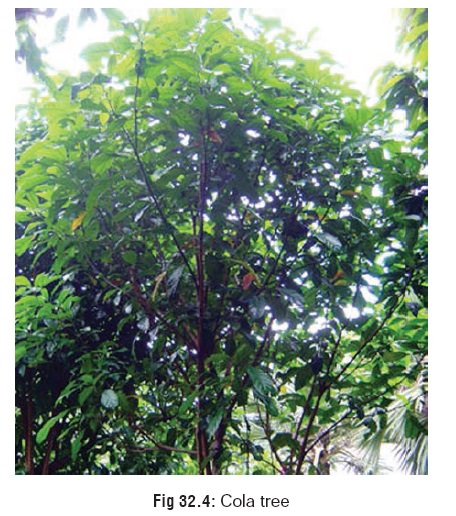 Important derivatives of methylxanthines (with increased water solubility) include aminophylline (combination of theo-phylline and ethylenediamine), and choline theophyllinate (or oxtriphylline). Diphylline is a covalently modified derivative. Other important xanthine derivatives include enprofylline, and pentoxifylline.

They are used in the treatment of asthma, chronic obstructive pulmonary disease (relief of dyspnoea), and prolonged apnoea in pre-term infants.

Common drugs which interact with theophylline are listed in Table 32.1.

·              Gastric lavage (unless there are contraindications such as convulsions).

·              Hypotension refractory to fluids and vasopressors such as dopamine, may respond to alpha-adrenergic drugs such as levarterenol. Propranolol has been suggested by some investigators, but caution must be exercised in asthmatics.

·              Convulsions often do not respond to conventional meas-ures, and administration of intravenous thiopentone may be necessary.

·              Hyperthermia and rhabdomyolysis can be treated with dantrolene 1 mg/kg over 20 minutes, and then 2 mg/kg/ hour for 4 hours. Hydration and maintenance of high urine output are essential.

·              Haemoperfusion is effective in theophylline overdose, and is the elimination procedure of choice. Indications include intractable convulsions, persistent hypoten-sion, uncontrollable arrhythmias, and serum theophyl-line levels greater than 60 to 80 mcg/ml. Charcoal haemoperfusion is said to be more effective than resin haemoperfusion.

·              Haemodialysis is less effective than haemoperfusion, while forced diuresis is not effective at all.

·              Anecdotal reports suggest that exchange transfusion can be life-saving in those cases of severe poisoning where haemoperfusion or haemodialysis cannot be done (espe-cially in infants).

·              Whole-bowel irrigation may be helpful in those cases where sustained-release preparations have been ingested. Such tablets are very slowly absorbed and can lead to bezoar formation.

·              There are no known antidotes to theophylline. But some investigators have suggested antidotal use of adenosine or pyridoxine.

Though caffeine is almost never used as an anti-asthmatic, it is being discussed here (along with other methylxanthines), only for the sake of convenience. Caffeine is said to be the most widely used of all mind-altering substances in the world. It is obtained mainly from the beans (Fig 32.5) of the coffee plant Coffea arabica. Today caffeine is consumed not only in the form of coffee, but also as chocolates, cocoa drinks, cola drinks, and tea (vide supra). 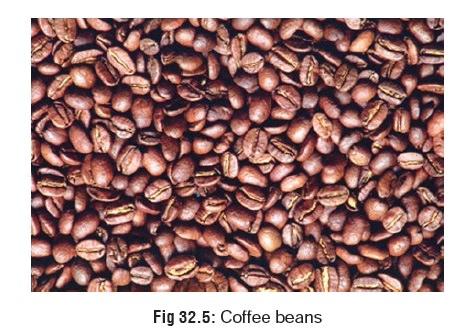 Apart from its use as a stimulant, caffeine is also used in combination with various analgesics to increase their potency. Several common pharmaceutical preparations contain varying concentrations of caffeine.

Mode of action of caffeine is mentioned in Table 32.2, while Table 32.3 lists the caffeine content of various bever- ages and drugs. 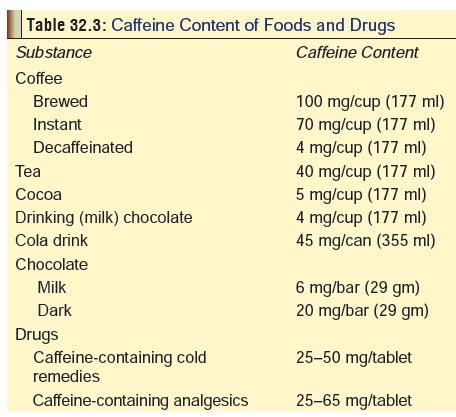 Acute overdoses with caffeine are rare. Most cases of toxicity arise from long-term daily consumption of excessive amounts through beverages or drugs.

Caffeine dependence syndrome—Daily intake of small quantities of caffeine (20 to 200 mg), produces mild positive effects such as a feeling of well being, alertness, and energetic disposition, but higher doses result in negative effects.

·              Anxiety syndrome: Restlessness, nervousness, tremor, irritability, hyperactivity, dry mouth. Severe cases may be associated with tinnitus, ocular dyskinesias, scotomata, and dysesthesias. An offshoot of anxiety syndrome is restless leg syndrome, characterised by discomfort and creeping sensations of lower legs which occur only at rest, producing an irresistible urge to move the legs constantly. It is often associated with insomnia since it generally appears in the late evening or at bed time.

·              Hypochondriasis syndrome: It is most commonly seen in moderate consumers of caffeine (250–750 mg/kg/day), and is characterised by non-specific aches and pains, myalgia and tremor.

·              Insomnia and/or headache syndrome: It is seen in sporadic or moderate users, and is characterised by delay in onset of sleep, restless sleep, and recurring headaches.

·              Depressive syndrome: Occurs in heavy users of caffeine (750 mg or more per day), and is characterised by lethargy, depression and anxiety.

·              Withdrawal syndrome: Results from abrupt stoppage of daily caffeine consumption (usually moderate or heavy use), and manifests as headache which sets in 12 to 24 hours after the last dose of caffeine, drowsiness, lethargy, impaired concentration, myalgia, nausea, rhinorrhoea, sweating and blurred vision. There is usually intense craving for caffeine.

·              Neonatal caffeine withdrawal: This is seen in children of women who had consumed large quantities of caffeine during pregnancy. They demonstrate jitteriness, irritability, and vomiting which can persist for several days.

o     Ventricular tachycardia/fibrillation: Cardioversion or defibrillation, or the use of bretylium, lignocaine, or procainamide.

o     CNS: Benzodiazepines or barbiturates can be given for convulsions or agitation. IV glucose may help, especially in children.

o     Anti-emetics such as metoclopramide or ondansetron for persistent vomiting.

T oday the only anticholinergic that is still recommended for ipratropium bromide. It is usually administered by inhalation. Ipratropium is particularly useful as a maintenance broncho-dilator for bronchospasm associated with chronic obstructive pulmonary disease. It has also been found to be beneficial in organophosphate poisoning when given intratracheally. Combined use of nebulised ipratropium and salbutamol may however precipitate acute angle-closure glaucoma, particularly in elderly patients. Combined use with terbutaline is associated with pharyngeal blistering.

Treatment consists of supportive and symptomatic meas-ures. In most cases, symptoms resolve spontaneously over a period of 24 hours after stopping the drug.