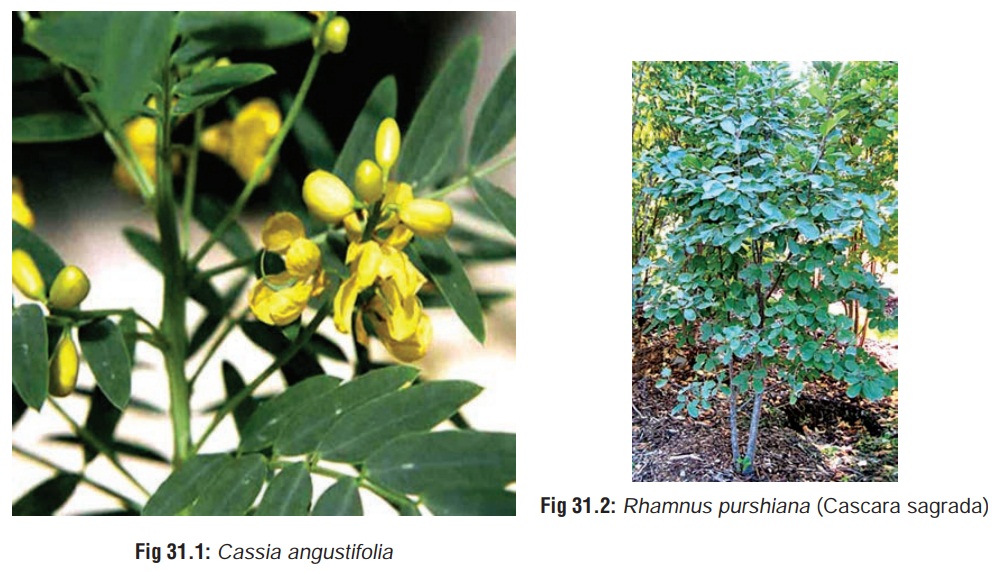 Laxatives are drugs which promote defaecation, and are widely employed in the treatment of constipation.

Laxatives are drugs which promote defaecation, and are widely employed in the treatment of constipation. Constipation can result not only from diseases of large intestine, nervous system, and endocrine system, but also from exposure to a number of drugs and toxins (Table 31.1). Laxatives only treat the symptom (constipation) but not the underlying cause. Hence every effort must be made to identify and treat the cause, rather than resort to the indiscriminate use of laxatives which can lead to serious repercussions (vide infra). 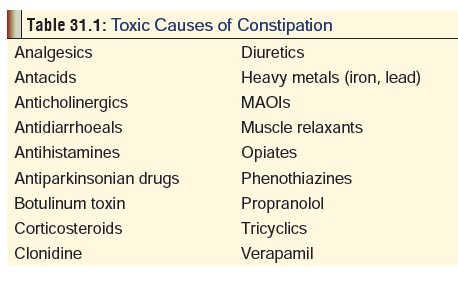 Glucomannan is a polysaccharide composed of glucose and mannose. Capsules of the fibre absorb up to 60 times their weight in water to form a gel.

Systemic toxicity is unlikely since these agents are unab-sorbed from the gastrointestinal tract and excreted in the faeces. Adverse effects are rare and usually mild: flatulence, borbo-rygmi, intestinal impaction. Intestinal obstruction has been occasionally observed. It can be prevented by taking enough water concurrently with the laxative. Obstruction and impac-tions are usually associated with intestinal pathology or lack of adequate hydration. Glucomannan has resulted in decreased blood glucose and serum insulin levels when given in single doses to diabetic patients. Diabetics should be cautioned that decreased insulin or oral hypoglycaemic requirements may occur.

Anaphylactoid reactions have been reported following exposure to psyllium containing products. Moderate-to-severe wheezing, tightness in the chest or throat, urticaria, and angi-oedema have been reported in some patients. The seed husk of psyllium mucilloid contains a protein that appears to be the source of the allergic reactions. Highly purified psyllium mucilloid may decrease the allergenicity to psyllium-containing products.

■■   Emesis and activated charcoal are usually not necessary following ingestions.

■■   Rigid oesophagoscopy has been used to relieve oesophageal obstruction.

Saline laxatives are generally given by mouth producing catharsis with soft or fluid stools. The citrates, sulfates, and tartrates of sodium or potassium are the usual agents used: magnesium sulfate (epsom salt), magnesium hydroxide (milkof magnesia), magnesium citrate, sodium phosphate, potas-sium bitartrate, potassium sodium tartrate, potassium sulfate, sodium citrate, sodium sulfate, lactulose, glycerine, sorbitol, mannitol, and polyethylene glycol electrolyte solution. These agents act by their osmotic properties in the luminal fluid and are poorly absorbed. However, many of the ions found in saline cathartics may be absorbed from the gastrointestinal tract. Some of them are utilised as cathartics in the treatment of poisoning.

Saline cathartics are poorly absorbed from the gastrointes-tinal tract, hence systemic toxicity is unlikely unless massive amounts have been ingested. Nausea, vomiting, abdominal pain, and diarrhoea are frequent findings. Severe diarrhoea may result in excessive fluid and electrolyte loss. Fluid and electrolyte abnormalities (dehydration and hypokalaemia) occur secondary to excessive diarrhoea. A mild diuresis may occur following excessive absorption of these compounds. Magnesium and sodium salts can cause electrolyte distur-bances and must be used with caution in the presence of renal impairment. Excessive absorption of sodium may aggravate congestive heart failure. Seizures may occur with elevated serum sodium levels. Lactulose can cause flatulence, cramps, nausea, hypernatraemia and hypokalaemia.

·              Monitor serum potassium and sodium concentrations in symptomatic patients following exposure to one of the saline cathartics.

·              Fluid and electrolyte status should be monitored at regular intervals.

·              Emesis is usually not necessary and may worsen dehydra- tion and electrolyte imbalances after large ingestions; it is not recommended.

·              Due to molecular size and ionic dissociation, charcoal is not likely to be beneficial.

·              Patients developing congestive heart failure from sodium intoxication may be treated with fluid restriction and/or diuretic therapy, furosemide 1 mg/kg IV to a maximum of 40 mg.

These may be either diphenylmethane derivatives (phenol-phthalein, bisacodyl), or anthraquinones (danthron, i.e. dihy-droxyanthraquinone, and its derivatives contained in senna, cascara, rhubarb, and aloe) . Senna is obtained from the dried pods or leaflets of Cassia acutifolia or Cassia angustifolia (Fig 31.1). Cascara sagrada (‘sacred bark’) is obtained from the bark of the buckthorn tree Rhamnus purshiana (Fig 31.2). Danthron was removed from the market in the United States in 1987 because of fears of carcinogenicity. As of August 1997, the FDA has also proposed a ban on phenolphthalein, based on animal carcinogen data and its potential risk to humans. 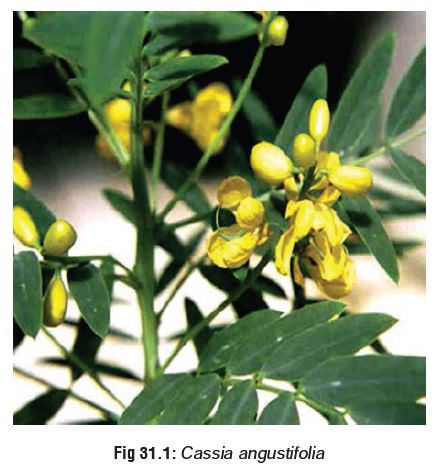 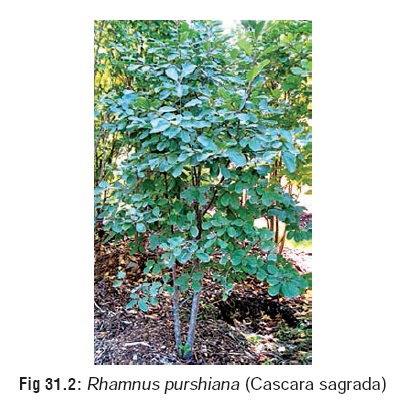 All these drugs stimulate intestinal motility by promoting the accumulation of water and electrolytes in the colonic lumen.

The therapeutic dose of diphenylmethane derivatives varies widely between different individuals, and therefore a particular dose can be ineffective in one, while being excessive in another.

·              Phenolphthalein use is associated with allergic reactions (including Stevens-Johnson syndrome), osteomalacia, and protein-losing gastro-enteropathy. Hypersensitivity reactions may lead to death. Hypotension and pulmonary oedema, although rare and probably secondary to an allergic response, have been reported following phenolphthalein intoxication.

·              Anthraquinones can cause yellowish or brownish coloured urine. Large doses induce nephritis. Melanosis coli (pigmentation of colonic mucosa) has been observed on long-term use.

·              Hepatitis and jaundice have been seen with various stimu- lant laxatives. Chronic abuse of senna has caused toxic hepatitis.

·              Orange vaginal secretions have been reported after use of large amounts of danthron.

■■   All persons with significant toxicity, dehydration, abnormal electrolyte levels, or a history of poor compli-ance should be admitted for intravenous therapy and consideration of antibiotic therapy.

■■ Activated charcoal has been shown to reduce the absorp-tion of phenolphthalein in humans and to decrease the purgative effect.

Examples include docusates (docusate sodium, calcium, and potassium)*, poloxamers (polyoxyethylene-polyoxy-propylene polymers), bile acids (dehydrocholic acid), and castor oil. Surfactant laxatives act as stool-wetting and stool-softening agents, allowing the mixing of water, fats, and faecal material. Docusates elevate alveolar surface tension by displacement of pulmonary surfactant from the alveolar hypophase. There is then a marked fall in arterial oxygen tension, an increase in airway pressure, and an increased alveolar epithelial permeability. Stool softener laxatives are indicated prophylactically in patients who should not strain during defaecation, such as those with an episiotomy wound, those with thrombosed haemorrhoids, fissures, or perianal abscesses, body wall and diaphragmatic hernias, anorectal stenosis, or postmyocardial infarction.

Castor oil obtained from the seeds of the castor plant (Ricinuscommunis) contains ricin, a very potent toxalbumen, and ricinoleicacid. The oil is a very powerful and dangerous laxative capable of inducing copious evacuation which can result in dehydration and electrolyte disturbances. It can reflexly stimulate uterine musculature and hence is contraindicated in pregnant women.

Mineral oil is a petroleum product and consists of a mixture of aliphatic hydrocarbons. It is categorised as a lubricant laxative. While being an effective laxative (penetrating and softening stools), routine use is not advocated owing to the following adverse effects:

·              A human teratogen by inhalation, mineral oil has caused testicular tumours in the foetus.

·              Due to aspiration hazard and generally low toxicity of these compounds, gastric decontamination is contraindicated.

·              Fluid and electrolyte status should be monitored in patients demonstrating severe vomiting and diarrhoea.

Cisapride and renzapride (a related drug) are oral gastrointes-tinal prokinetic agents that stimulate gastrointestinal motility and are used in the treatment of gastroesophageal reflux disease. Cisapride is a benzamide, and is mainly employed in the treatment of gastric retention and other gastroparetic condi-tions. Since it also increases colonic motility, it is sometimes recommended as a laxative, especially for chronic constipa-tion. Renzapride has been shown in clinical trials to be useful in the treatment of diabetic gastroparesis and constipation-predominant irritable bowel syndrome. In 2000, cisapride was withdrawn from the market in both the United States and the United Kingdom due to increasing numbers of reported adverse events of heart rhythm abnormalities.

Cisapride increases the release of acetylcholine at the myenteric plexus level of the gastrointestinal tract, increases the lower oesophageal resting tone, and increases the ampli-tude of lower oesophageal contractions. Gastrointestinal motility is then stimulated, gastric emptying is accelerated, and colonic peristalsis is increased. Renzapride is a type 3 serotonin antagonist and a type 4 serotonin agonist. Following a therapeutic dose, renzapride blocks serotonin 3 receptors and stimulates serotonin 4 receptors; it does not exhibit dopamine D(2) receptor antagonism. It also has been shown to stimulate gastric acid secretion during low-dose pentagastrin infusion, and block secretion during high-dose pentagastrin stimula-tion. Due to this interchange of mechanisms, this drug lowers oesophageal sphincter pressure and increases gastric emptying.

Cisapride should be taken prior to a meal, since food increases its absorption. Adverse effects include headache, vertigo, abdominal cramps, borborygmi, gastrointestinal distress, urinary frequency. Tachycardia has been reported. ECG abnormalities, QT prolongation, and arrhythmias including torsades de pointes have also been reported. Akathisias have also occurred rarely. Urinary incontinence and vaginitis have developed in a few patients.

Overdose experience with cisapride and renzapride are limited. Retching, borborygmi, flatulence, stool frequency, and urinary frequency have been reported. Drugs that inhibit the cytochrome P450 3A4 enzymes may increase blood levels of cisapride, resulting in cardiac arrhythmias. Concurrent use of erythromycin, clarithromycin, troleandomycin, nefazodone, indinavir, ritonavir, and azole antifungals can induce cardiac arrhythmias. Drugs known to prolong the QT interval and increase the risk of arrhythmia should also not be taken concur-rently with cisapride. Since cisapride increases gastric emptying and rate of absorption, the effect of sedative drugs and alcohol may be significantly pronounced.

·              Despite its prolongation of the QT interval, amiodarone has been reported to be effective in treating both acute episodes of torsades de pointes, as well as preventing recurrences.

·              Mexiletine may be useful in the treatment of cisapride- induced long QT syndrome. Caution should however be observed in the presence of pre-existing impaired cardiac function, since mexiletine could suppress the ventricular contraction together with a decrease of cardiac output, leading to potential cardiovascular collapse.