Pulmonary hypertension is a condition that is not clinically evident until late in its progression.

Pulmonary hypertension is a condition that is not clinically evi-dent until late in its progression. Pulmonary hypertension exists when the systolic pulmonary artery pressure exceeds 30 mm Hg or the mean pulmonary artery pressure exceeds 25 mm Hg. These pressures cannot be measured indirectly as can systemic blood pressure; instead, they must be measured during right-sided heart catheterization. In the absence of these measurements, clinical recognition becomes the only indicator for the presence of pul-monary hypertension. 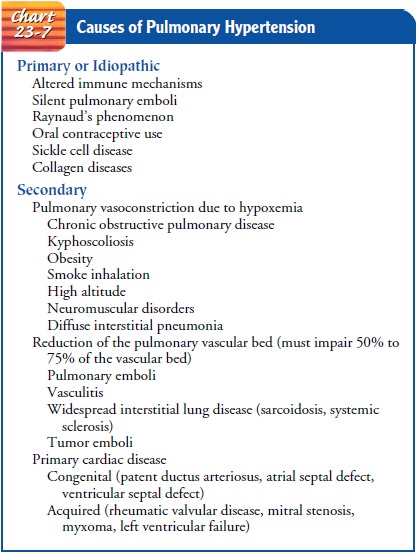 A complete diagnostic evaluation includes a history, physical ex-amination, chest x-ray, pulmonary function studies, electrocar-diogram (ECG), echocardiogram, ventilationâ€“perfusion scan, and cardiac catheterization. In some cases, a lung biopsy, performed by thoracotomy or thoracoscopy, may be needed to make a defi-nite diagnosis. Cardiac catheterization of the right side of the heart reveals elevated pulmonary arterial pressure. An echocardiogram can assess the progression of the disease and rule out other condi-tions with similar signs and symptoms. The ECG reveals right ventricular hypertrophy, right axis deviation, and tall peaked P waves in inferior leads, tall anterior R waves, and ST-segment depression and/or T-wave inversion anteriorly. The PaO2 also is decreased (hypoxemia). A ventilationâ€“perfusion scan or pul-monary angiography detects defects in pulmonary vasculature, such as pulmonary emboli. Pulmonary function studies may be normal or show a slight decrease in vital capacity (VC) and lung compliance, with a mild decrease in the diffusing capacity.

The goal of treatment is to manage the underlying cardiac or pul-monary condition. Most patients with primary pulmonary hyper-tension do not have hypoxemia at rest but require supplemental oxygen with exercise. However, patients with severe right ventric-ular failure, decreased cardiac output, and progressive disease may have resting hypoxemia and require continuous oxygen supple-mentation. Appropriate oxygen therapy reverses the vasoconstriction and reduces the pulmonary hypertension in a rel-atively short time.

In the presence of cor pulmonale, which is discussed in the section that follows, treatment should include fluid restriction, diuretics to decrease fluid accumulation, cardiac glycosides (eg, digitalis) in an attempt to improve cardiac function, calcium channel blockers for vasodilation, and rest. In primary pulmonary hypertension, vasodilators have been administered with variable success (eg, calcium channel blockers, intravenous prostacyclin). Prostacyclin (PGX [Flolan]) is one of the prostaglandins pro-duced by the pulmonary endothelium. Intravenous prostacyclin (epoprostenol) helps to decrease pulmonary hypertension by re-ducing pulmonary vascular resistance and pressures and increas-ing cardiac output. Anticoagulants such as warfarin (Coumadin) have been given to patients because of chronic pulmonary em-boli. Heartâ€“ lung transplantation has been successful in select pa-tients with primary hypertension who have not been responsive to other therapies.

The major nursing goal is to identify patients at high risk for pul-monary hypertension, such as those with COPD, pulmonary emboli, congenital heart disease, and mitral valve disease. The nurse also must be alert for signs and symptoms, administer oxy-gen therapy appropriately, and instruct patients and their fami-lies about the use of home oxygen supplementation.