A variety of enzymes have been in industrial use since before genetic engineering appeared.

A variety of enzymes have been in industrial use since before genetic engineering appeared. However, merely a couple of dozen enzymes account for over 90% of total industrial enzyme use. Some common examples are listed in Table 11.1. These proteins are used under relatively harsh conditions and are exposed to oxidizing conditions not found inside living cells. Consequently, these particular proteins are unusually robust and stable and are not at all representative of typical enzymes in this respect. It is notable that most of them are hydrolases that degrade either carbohydrate polymers or proteins.

Increasing the range of industrial enzymes has three facets. First, modern biology has identified many novel enzyme-catalyzed reactions that may be of industrial use. Second, as discussed in the previous chapter, it is now possible to produce desired proteins in large amounts because of gene cloning and expression systems. Third, the sequence of the protein itself may be altered by genetic engineering to improve its properties. This is known as protein engineering and is the subject of the present chapter. 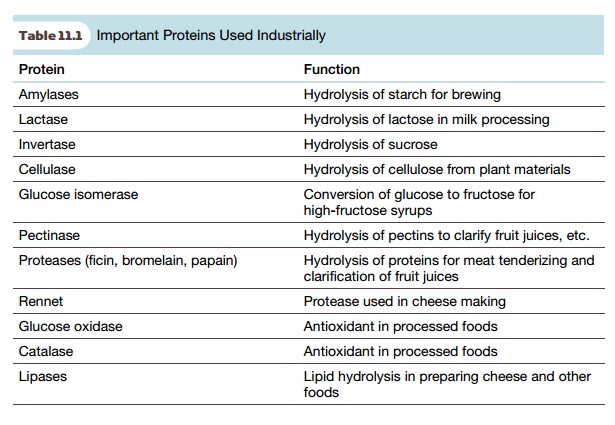 Methods for manipulating DNA sequences and for expressing the encoded proteins have been discussed in previous chapters. Therefore we shall omit these details here. Rather we will emphasize the possibilities for altering the biological properties of proteins. In practice, most protein engineering has so far been concerned with making more stable variants of useful enzymes. The objective here is to engineer proteins so that they may be used under industrial conditions without being denatured and losing activity. However, it is also possible to alter proteins to change the specificity of their enzyme activities or even to create totally new enzyme activities. Ultimately, it may be possible to design proteins from basic principles. This will require the ability to predict three-dimensional protein structure from the polypeptide sequence.