A related approach to directed evolution is to deliberately recombine functional domains from different proteins.

By itself the endonuclease domain cuts DNA nonspecifically. However, when the nuclease domain is attached to a DNA-binding domain, this domain determines the sequence specificity of the hybrid protein. The two domains may be joined via a sequence encoding a linker peptide such as (GlyGlyGlyGlySer)3 (Fig. 11.8). Cleavage of the DNA occurs several bases to the side of the recognition sequence, as in the native FokI restriction enzyme. 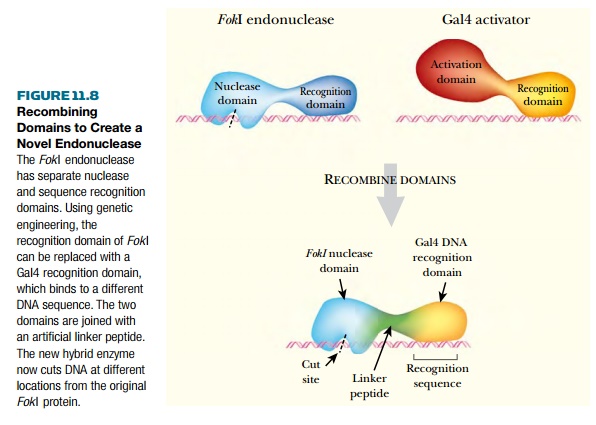 Several different DNA binding domains have been combined with the nuclease domain of FokI. For example, the Gal4 protein of yeast is a transcriptional activator that recognizes a 17 base-pain consensus sequence. Gal4 has two domains, a DNA binding domain and a transcription activating domain. The N-terminal 147 amino acids of Gal4 can be fused to the nuclease domain of FokI, giving a hybrid protein that binds to the Gal4 consensus sequence and cleaves the DNA at that location.

Zinc finger domains have also been joined to the nuclease domain of FokI. The zinc finger is a common DNA binding motif found in many regulatory proteins. The zinc finger consists of 25 to 30 amino acids arranged around a Zn ion, which is held in place by binding to conserved cysteines and histidines. Each zinc finger motif binds three base pairs, and a zinc finger domain may possess several motifs. In this example, domains approximately 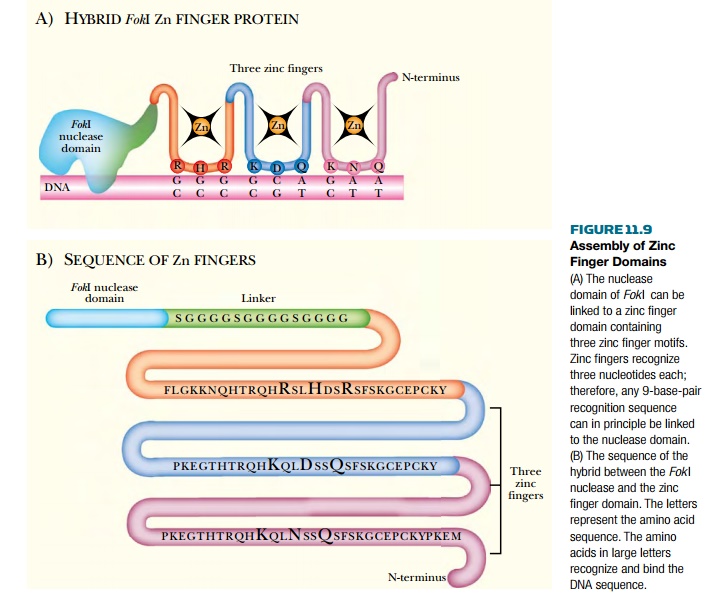