Relatively few of the amino acid residues in a protein are actually involved in the active site.

Relatively few of the amino acid residues in a protein are actually involved in the active site. Most of the protein provides the 3D platform or scaffold needed to correctly position the active site residues. Quite often the scaffold is much larger than really necessary. For example, the β-galactosidase of Escherichia coli (LacZ protein) has approximately 1000 amino acids, whereas most simple hydrolytic enzymes have only 200 to 300. Presumably it should be possible to redesign a functional β-galactosidase that is only 25% to 30% the size of LacZ protein. From an industrial viewpoint, such a smaller protein would obviously be more efficient.

The concept of using only the active site region of useful proteins has already been applied to antibody engineering as discussed. In addition, the technique of phage display  has been used to select relatively short peptides for binding to a variety of target molecules. Once such a binding domain has been selected, it can be grafted on to another protein. Such techniques will allow the engineering of smaller proteins whose biosynthesis consumes less energy and material (Fig. 11.5). 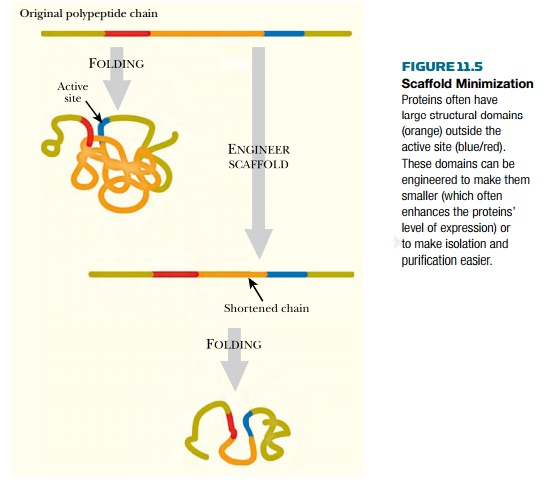