In addition to altering the overall stability of a protein, it is possible to deliberately change the active site.

In addition to altering the overall stability of a protein, it is possible to deliberately change the active site. The most straightforward alterations to make are those that change the binding specificity for the substrate or a cofactor, but do not disrupt the enzyme mechanism. Changing the specificity for a cofactor or substrate may be useful, either to make the product of the enzyme reaction less costly or to change it chemically.

This principle has been demonstrated with several enzymes that use the cofactors NAD or NADP to carry out dehydrogenation reactions. Both cofactors carry reducing equivalents and both react by the same mechanism. Although a few enzymes can use either NAD or NADP, most use one or the other. Generally, NAD is used by dehydrogenases in degradative pathways, and the respiratory chain oxidizes the resulting NADH. In contrast, biosynthetic enzymes use NADP. Structurally they differ only in NADP having an extra phosphate group attached to the ribose ring (Fig. 11.3). This gives NADP an extra negative charge and, not surprisingly, enzymes that prefer NADP have somewhat larger binding pockets with positively charged amino acid residues at the bottom. Enzymes that favor NADH often have a negatively charged amino acid residue in the corresponding position. 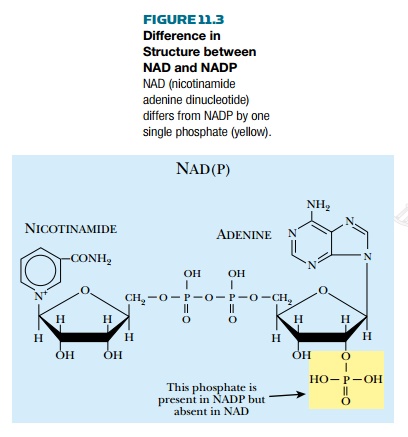 Several enzymes that use NAD or NADP have been engineered to change their preference. For example, the lactate dehydrogenase (LDH) of most bacteria uses reduced NAD, not NADP, to convert pyruvate to lactate.

A conserved aspartate provides the negative charge at the bottom of the cofactor binding pocket that excludes NADP. If this is changed to a neutral residue, such as serine, the enzyme becomes able to use both NADP and NAD. If, in addition, a nearby hydrophobic residue in the cofactor pocket is replaced by a positively charged amino acid (such as lysine or arginine), the enzyme now prefers NADP to NAD (Fig. 11.4).

The specificity of LDH for its substrate can be altered in a similar way. The natural substrate lactate is a three-carbon hydroxyacid. It is possible to alter several residues surrounding the substrate binding site without impairing the enzyme reaction mechanism. By replacing a pair of alanines with glycines, the binding site can be made larger. By replacing hydrophilic residues (Lys, Gln) with hydrophobic ones (Val, Met), the site becomes more hydrophobic. Alteration of multiple residues gives an engineered LDH that accommodates five or six carbon analogs of lactate and uses them as substrates.