In a common approach, DNA modules of around 75 base pairs (i.e., 25 codons) are made by chemical DNA synthesis.

So far we have discussed ways to modify a useful protein that already exists. Another approach to protein engineering is to generate large numbers of different protein sequences and then screen them for some useful enzyme activity or other chemical property. (Screening is often done by phage display or related techniques as described) Rather than merely generating large numbers of random polypeptides, combinatorial screening usually uses pre-made modules of some sort to create a random shuffling library. For example, protein motifs known to provide a binding site for metal ions or metabolites might be combined with segments known to form structures such as an alpha helix.

In a common approach, DNA modules of around 75 base pairs (i.e., 25 codons) are made by chemical DNA synthesis. Several modules are then assembled to give a new artificial gene. The modules are usually joined by PCR using overlapping primers Modules may be joined in a chosen order or in a randomized manner. For proper expression of the assembled sequence, the front and rear modules are normally specified to provide suitable promoter and terminator sequences. The intervening modules may then be randomly shuffled to generate more possible variation (Fig. 11.12). 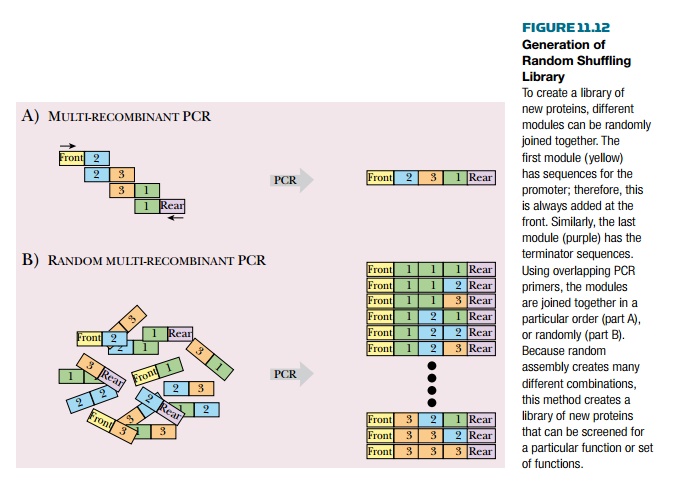 The resulting protein library is then screened for some activity associated with the modules used. For example, if modules for binding an organic metabolite and for binding Fe ions were included, then the library of products might be screened for an enzymatic activity that oxidizes the metabolite via iron-mediated catalysis.

A related approach is based on the idea that the exons of eukaryotic genes encode modular segments of proteins, such as binding sites and structural motifs. Although it is by no means always true, in many cases exon boundaries do correspond to the ends of structural domains within the encoded proteins. Consequently, it is believed that at least some eukaryotic genes have evolved by the natural shuffling of exons.

In the exon shuffling approach a combinatorial library is generated from an already existing eukaryotic gene. Each of the exons of the eukaryotic gene is generated by a separate PCR reaction. The segments are then mixed and reassembled by overlap PCR. Two variants exist, depending on the design of the overlap primers for the PCR assembly. Reassembling the exons in random order generates a random splicing library, much as described earlier. Less radically, an alternative splicing library retains the order of the exons but includes or excludes any particular exon at random (Fig. 11.13). The final products are prescreened to obtain sequences long enough to encode most of the original exons, as this obviously greatly increases the chances of a functional protein. 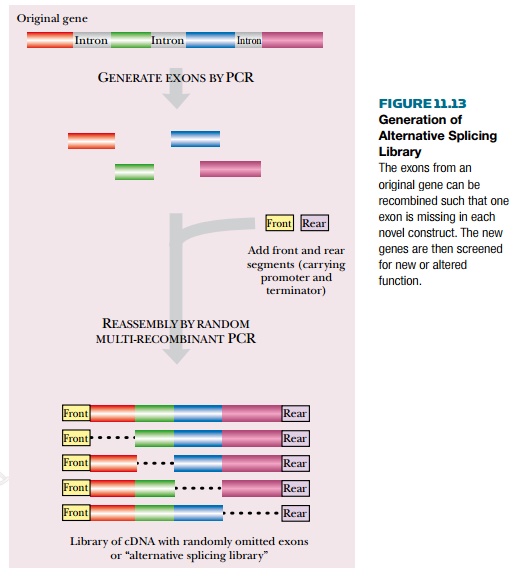