Natural selection works on new sequences generated both by mutation and recombination. DNA shuffling is a method of artificial evolution that includes the creation of novel mutations as well as recombination.

Natural selection works on new sequences generated both by mutation and recombination. DNA shuffling is a method of artificial evolution that includes the creation of novel mutations as well as recombination. The gene to be improved is cut into random segments around 100 to 300 base pairs long. The segments are then reassembled by using a suitable DNA polymerase with overlapping segments or by using some version of overlap PCR. This recombines segments from different copies of the same gene (Fig. 11.10). 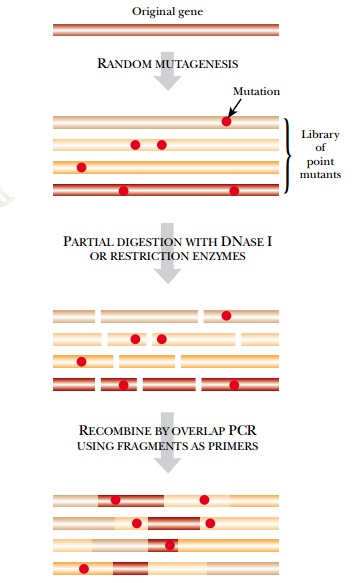 Mutations may be introduced in several ways, including the standard mutagenesis procedures already described. In addition, the DNA segments may be generated using error-prone PCR (see earlier discussion) instead of by using restriction enzymes. Alternatively, mutations may be introduced during the reassembly procedure itself by using a DNA polymerase that has impaired proofreading capability. The result is a large number of copies of the gene, each with several mutations scattered at random throughout its sequence. The final shuffled and mutated gene copies must then be expressed and screened for altered properties of the encoded protein.

A more powerful variant of DNA shuffling is to start with several closely related (i.e., homologous) versions of the same gene from different organisms. The genes are cut at random with appropriate restriction enzymes and the segments mixed before reassembly. The result is a mixture of genes that have recombined different segments from different original genes 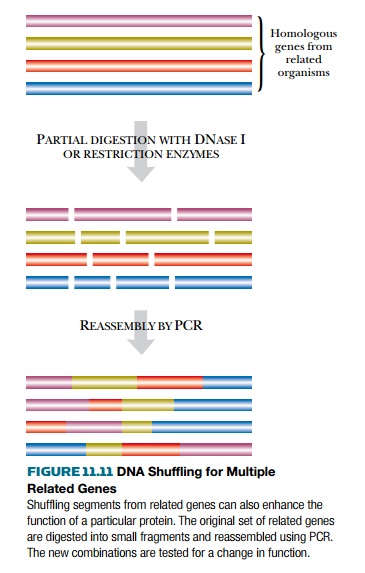 (Fig. 11.11). Note that the reassembled segments keep their original natural order. For example, several related β-lactamases from different enteric bacteria have been shuffled. The shuffled genes were cloned onto a plasmid vector and transformed into host bacteria. The bacteria were then screened for resistance to selected β-lactam antibiotics. This approach yielded improved β-lactamases that degraded certain penicillins and cephalosporins more rapidly and so made their host cells up to 500-fold more resistant to these β-lactam antibiotics.