A. Explain the formation and function of platelet plugs and blood clots. B. describe the regulation of clot formation and how clots are removed.

When a blood vessel is damaged, blood can leak into other tissues and interfere with normal tissue function, or blood can be lost from the body. The body can tolerate a small amount of blood loss and can produce new blood to replace it. But a large amount of blood loss can lead to death. Fortunately, when a blood vessel is damaged, loss of blood is minimized by three processes: vascular spasm, platelet plug formation, and blood clotting.

Vascular spasm is an immediate but temporary constriction of ablood vessel that results when smooth muscle within the wall of the vessel contracts. This constriction can close small vessels completely and stop the flow of blood through them. Damage to blood vessels can activate nervous system reflexes that cause vascular spasm. Chemicals also produce vascular spasm. For example, platelets releasethromboxanes (throm′ bok-zānz), which are derived from certain prostaglandins, and endothelial (epithelial) cells lining blood vessels release the peptide endothelin (en-dō-thē′ lin).

A platelet plug is an accumulation of platelets that can seal up a small break in a blood vessel. Platelet plug formation is very important in maintaining the integrity of the blood vessels of the cardiovascular system because small tears occur in the smaller vessels and capillaries many times each day. People who lack the normal number of platelets tend to develop numerous small hemorrhages in their skin and internal organs.

The formation of a platelet plug can be described as a series of steps, but in actuality many of these steps occur at the same time (figure 11.8). First, platelets stick to the collagen exposed by blood vessel damage; this phenomenon is called platelet adhe-sion. Most platelet adhesion is mediated through von Willebrand factor, a protein produced and secreted by blood vessel endothe-lial cells. Von Willebrand factor forms a bridge between collagen and platelets by binding to platelet surface receptors and collagen. After platelets adhere to collagen, they become activated, change shape, and release chemicals. 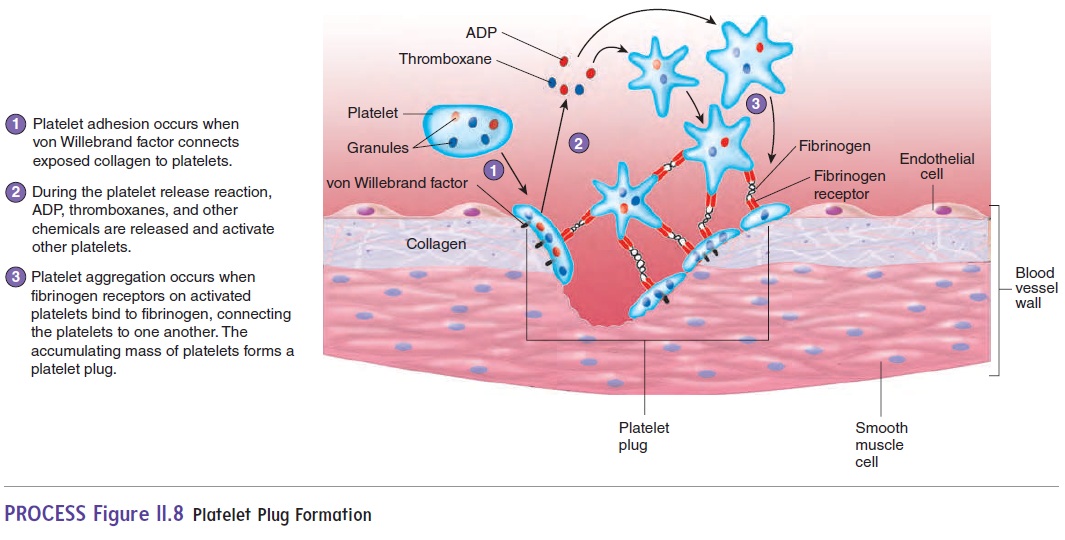 Blood vessel constriction and platelet plugs alone are not suf-ficient to close large tears or cuts in blood vessels. When a blood vessel is severely damaged, blood clotting, or coagulation (kō-ag-ū-lā′shŭn), results in the formation of a clot. Aclotis a networkof threadlike protein fibers, called fibrin (f ı̄′ brin), that traps blood cells, platelets, and fluid. 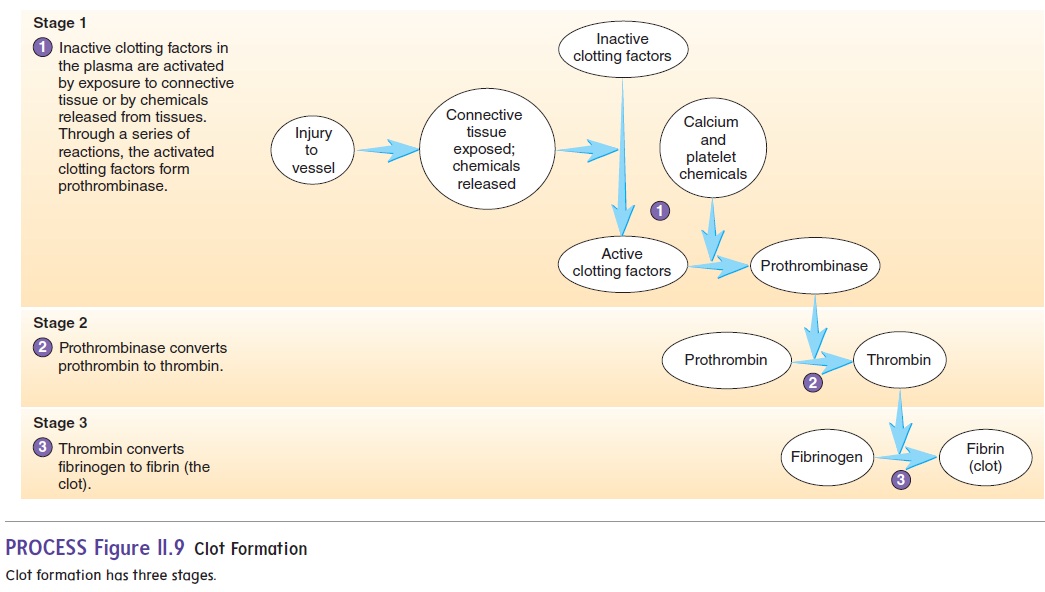 Most clotting factors are manufactured in the liver, and many of them require vitamin K for their synthesis. In addition, many of the chemical reactions of clot formation require Ca2+ and the chemicals released from platelets. The clotting process can be severely impaired by low levels of vitamin K, low levels of Ca2+, low numbers of platelets, or reduced synthesis of clotting factors because of liver dysfunction.

Humans rely on two sources of vitamin K. About half comes from the diet, and the other half comes from bacteria within the large intestine. Antibiotics taken to fight bacterial infections sometimes kill these intestinal bacteria, reducing vitamin K levels and causing bleeding problems. Vitamin K supplements may be necessary for patients on prolonged antibiotic therapy. Newborns lack these intestinal bacteria and thus routinely receive a vita-min K injection at birth. Infants can also obtain vitamin K from food, such as milk. Because cow’s milk contains more vitamin K than does human milk, breast-fed infants are more susceptible to bleeding than are bottle-fed infants. However, maternal supple-mentation with vitamin K, such as with oral vitamins, adequately elevates breast-fed infant vitamin K levels and decreases the risk of bleeding.

Without control, clotting would spread from the point of its initiation throughout the blood vessels. Fortunately, the blood contains several anticoagulants (an′ t ē-k ō-ag′ ū-lantz), which prevent clotting factors from forming clots under normal condi-tions. For example, antithrombin (an-tē-throm′ bin) and heparin (hep′ ă-rin) inactivate thrombin. Without thrombin, fibrinogen is not converted to fibrin, and no clot forms. At an injury site, however, the activation of clotting factors is very rapid. Enough clotting factors are activated that the anticoagulants can no longer prevent a clot from forming. Away from the injury site, there are enough anticoagulants to prevent clot formation from spreading.

After a clot has formed, it begins to condense into a more compact structure through a process known as clot retraction. Platelets contain the contractile proteins actin and myosin, which operate in a fashion similar to that of the actin and myosin in muscle . Platelets form small extensions that attach to fibrin through surface receptors. Contraction of the extensions pulls on the fibrin and leads to clot retraction. During clot retraction, serum, which is plasma without the clotting factors, is squeezed out of the clot.

Retraction of the clot pulls the edges of the damaged blood vessel together, helping stop the flow of blood, reducing the prob-ability of infection, and enhancing healing. The vessel is repairedas fibroblasts move into the damaged area and new connective tissue forms. In addition, epithelial cells around the wound divide and fill in the torn area . 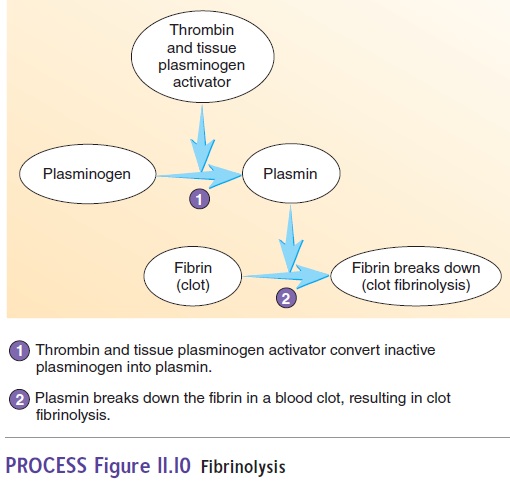 A heart attack can result when a clot blocks blood vessels that supply the heart. One treatment for a heart attack is to inject certain chemicals into the blood that activate plasmin. Unlike aspirin and anticoagulant therapies, which are used to prevent heart attacks, plasmin activators quickly dissolve the clot and restore blood flow