A. Explain how blood pressure and resistance to flow change as blood flows through the blood vessels. B. Describe the exchange of material across a capillary wall.

The function of the circulatory system is to maintain adequate blood flow to all body tissues. Adequate blood flow is required to provide nutrients and O2 to the tissues and to remove the waste products of metabolism from the tissues. Blood flows through the arterial system primarily as a result of the pressure produced by contractions of the heart ventricles.

Blood pressure is a measure of the force blood exerts against theblood vessel walls. In arteries, blood pressure values go through a cycle that depends on the rhythmic contractions of the heart. When the ventricles contract, blood is forced into the arteries, and the pressure reaches a maximum value called the systolic pressure.

Health professionals most often use the auscultatory (aws-kŭl′ tă-tō-rē; to listen) method to determine blood pressure (figure 13.21). A blood pressure cuff connected to a sphygmoma-nometer (sfig′mō-mă-nom′ĕ-ter) is wrapped around the patient’sarm, and a stethoscope (steth′ ō-skōp) is placed over the brachial artery. The blood pressure cuff is then inflated until the brachial artery is completely blocked. Because no blood flows through the constricted area at this point, no sounds can be heard through the stethoscope (figure 13.21, step 1). The pressure in the cuff is then gradually lowered. As soon as the pressure in the cuff declines below the systolic pressure, blood flows through the constricted area each time the left ventricle contracts. The blood flow is turbulent immediately downstream from the constricted area. This turbulence produces vibrations in the blood and surrounding tissues that can be heard through the stethoscope. These sounds are called Korotkoff (Kō-rot′ kof) sounds, and the pressure at which the first Korotkoff sound is heard is the systolic pressure (figure 13.21, step 2). 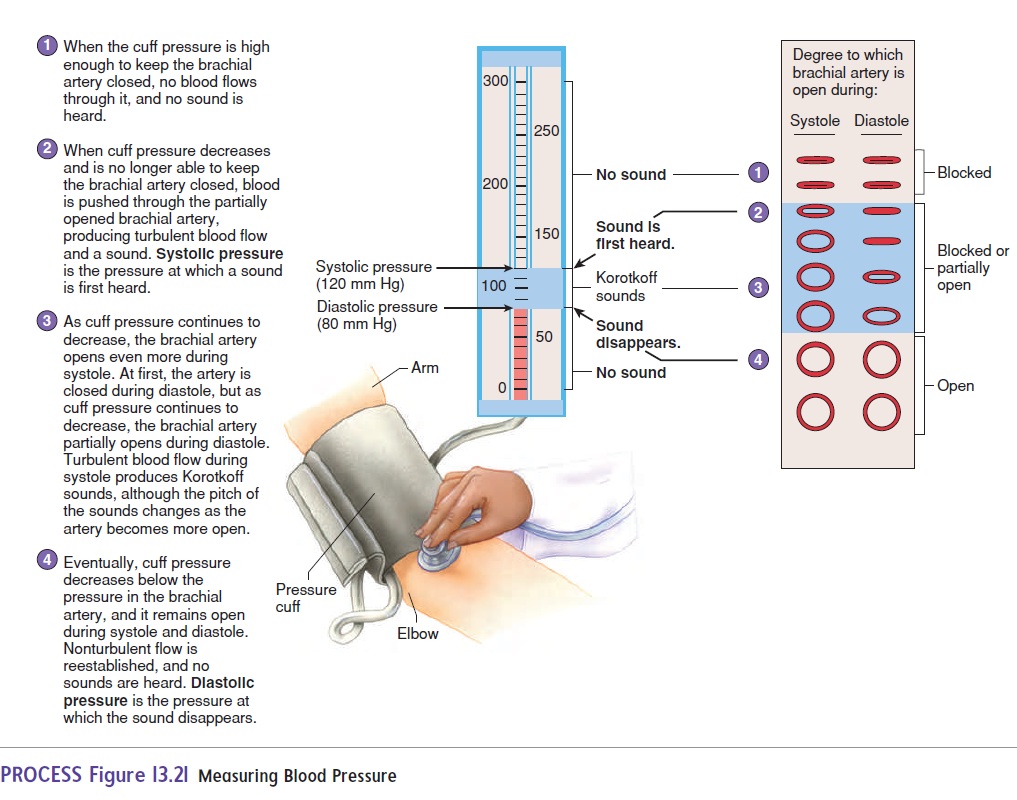 As the pressure in the blood pressure cuff is lowered still more, the Korotkoff sounds change tone and loudness (figure 13.21, step 3). When the pressure has dropped until the brachial artery is no longer constricted and blood flow is no longer turbulent, the sound disappears completely. The pressure at which the Korotkoff sounds disappear is the diastolic pressure (figure 13.21, step 4). The brachial artery remains open during systole and diastole, and continuous blood flow is reestablished.

The systolic pressure is the maximum pressure produced in the large arteries. It is also a good measure of the maximum pressure within the left ventricle. The diastolic pressure is close to the lowest pressure within the large arteries. During relaxation of the left ventricle, the aortic semilunar valve closes, trapping the blood that was ejected during ventricular contraction in the aorta. The pressure in the ventricles falls to 0 mm Hg during ventricular relaxation. However, the blood trapped in the elastic arteries is compressed by the recoil of the elastic arteries, and the pressure falls more slowly, reaching the diastolic pressure (see figure 12.18).

As blood flows from arteries through the capillaries and veins, blood pressure falls progressively to about 0 mm Hg or even slightly lower by the time blood is returned to the right atrium. In addition, the fluctuations in blood pressure are damped, meaning that the dif-ference between the systolic and diastolic pressures is decreased in the small-diameter vessels. The decrease in fluctuations in pressure is the result of increased resistance to blood flow in smaller and smaller vessels. By the time blood reaches the capillaries, the small-est of the vessels, there is no variation in blood pressure, and only a steady pressure of about 30 mm Hg remains (figure 13.22). 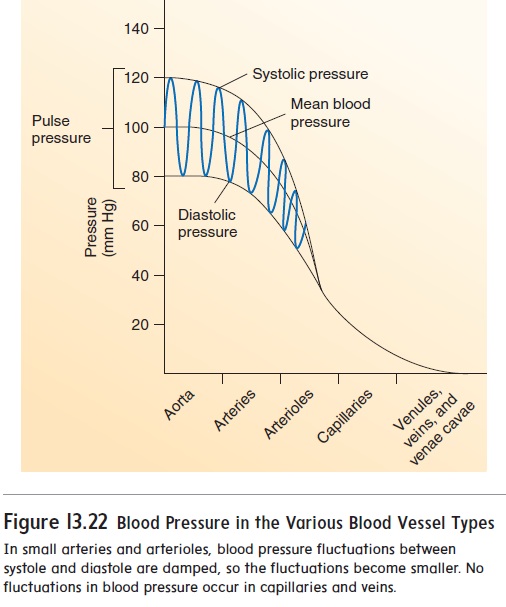 Because of veins’ large diameters, resistance to blood flow in them is low. The low resistance results in low blood pressure in the veins. However, though pressure is low, blood continues to flow through the veins toward the heart. Blood flow rate is ensured and amplified by valves that prevent the backflow of blood in the veins, as well as skeletal muscle movements that periodically compress veins, forcing blood to flow toward the heart.

The muscular arteries, arterioles, and precapillary sphincters are capable of constricting (vasoconstriction) and dilating (vasodi-lation). If vessels constrict, resistance to blood flow increases, and the volume of blood flowing through the vessels declines. Becausemuscular arteries are able to constrict and dilate, they help control the amount of blood flowing to each region of the body. In contrast, arterioles and precapillary sphincters regulate blood flow through local tissues. 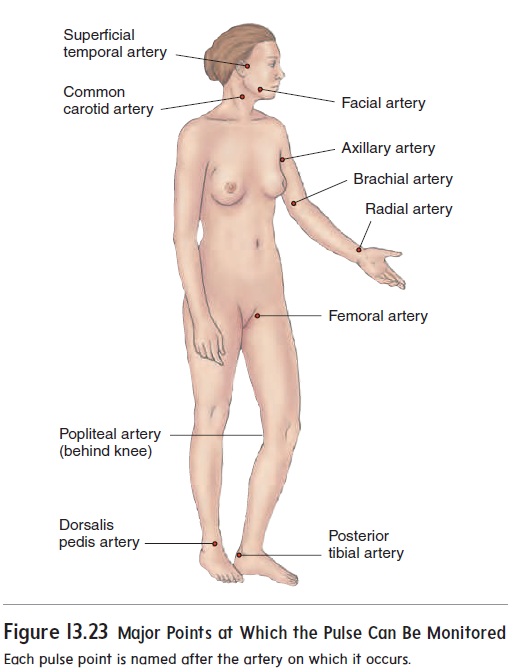 Ejection of blood from the left ventricle into the aorta produces a pressure wave, or pulse, which travels rapidly along the arteries. A pulse can be felt at locations where large arteries are close to the surface of the body (figure 13.23). Health professionals should know the major locations of pulse detection because monitoring the pulse can yield important information about the heart rate, the heart rhythm, and other characteristics. For example, a weak pulse usually indicates a decreased stroke volume or increased constric-tion of the arteries. 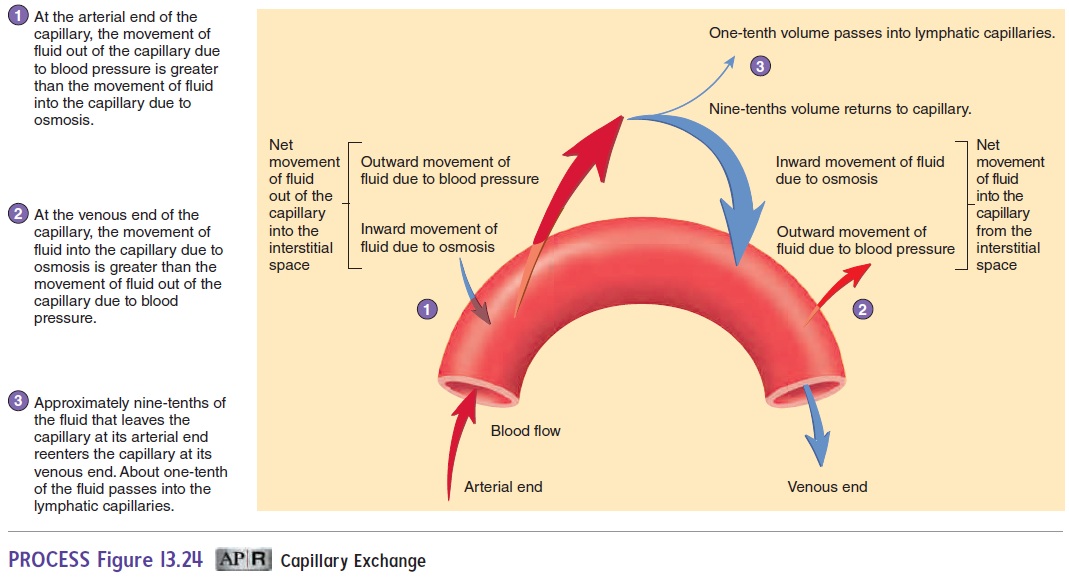 dissolved in a fluid, the greater the osmotic pressure of the fluid . The greater osmotic pressure of blood is caused by the large concentration of plasma proteins  that are unable to cross the capillary wall. The concentration of proteins in the interstitial space is much lower than that in the blood. The capil-lary wall acts as a selectively permeable membrane, which prevents proteins from moving from the capillary into the interstitial space but allows fluid to move across the capillary wall.

Approximately nine-tenths of the fluid that leaves the capil-lary at the arterial end reenters the capillary at its venous end. The remaining one-tenth of the fluid enters the lymphatic capillaries and is eventually returned to the general circulation .

Edema, or swelling, results from a disruption in the normalinwardly and outwardly directed pressures across the capillary walls. For example, inflammation increases the permeability of capillar-ies. Proteins, mainly albumin, leak out of the capillaries into the interstitial spaces.