describe the short-term and long-term mechanisms that regulate arterial pressure.

Adequate blood pressure is required to maintain blood flow through the blood vessels of the body, and several regulatory mechanisms ensure that blood pressure remains adequate for this task. The mean arterial blood pressure (MAP) is slightly less than the average of the systolic and diastolic pressures in the aorta because diastole lasts longer than systole. The mean arterial pres-sure is about 70 mm Hg at birth, is maintained at about 95 mm Hg from adolescence to middle age, and may reach 110 mm Hg in a healthy older person.

The body’s MAP is equal to the cardiac output (CO) times the peripheral resistance (PR), which is the resistance to blood flow in all the blood vessels:

Baroreceptor reflexes activate responses that keep the blood pres-sure within its normal range. Baroreceptors respond to stretch in arteries caused by increased pressure. They are scattered along the walls of most of the large arteries of the neck and thorax, and many are located in the carotid sinus at the base of the internal carotid artery and in the walls of the aortic arch. Action potentials travel from the baroreceptors to the medulla oblongata along sen-sory nerve fibers (figure 13.27). 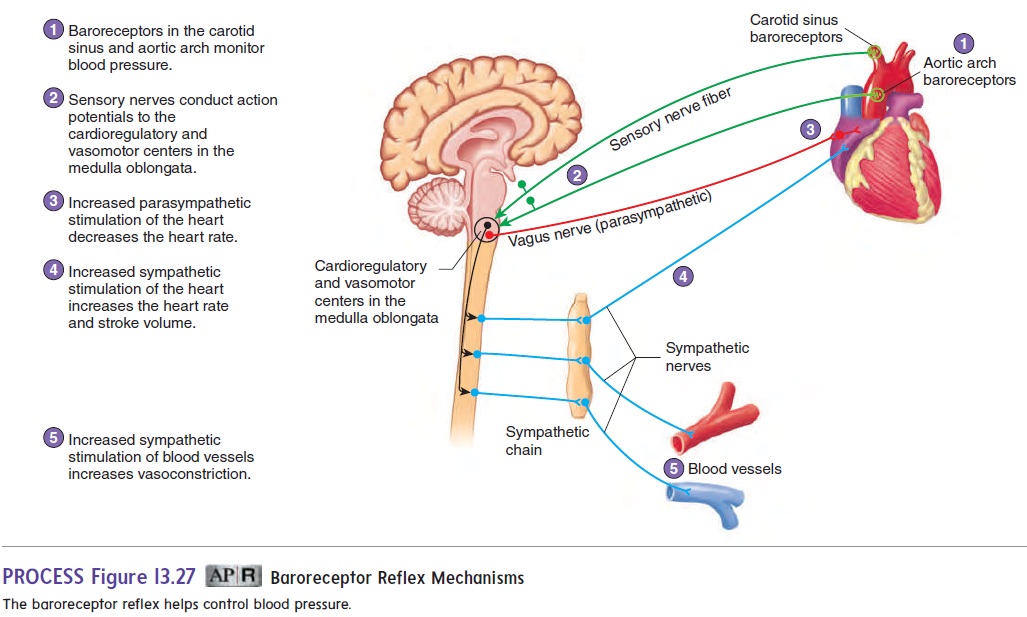 A sudden increase in blood pressure stretches the artery walls and increases action potential frequency in the baroreceptors. The increased action potential frequency delivered to the vasomotor and cardioregulatory centers in the medulla oblongata causes responses that lower the blood pressure. One major response is a decrease in vasomotor tone, resulting in dilation of blood vessels and decreased peripheral resistance. Other responses, controlled by the cardioregulatory center, are an increase in the parasym-pathetic stimulation of the heart, which decreases the heart rate, and a decrease in the sympathetic stimulation of the heart, which reduces the stroke volume. The decreased heart rate, stroke vol-ume, and peripheral resistance lower the blood pressure toward its normal value (figure 13.28). 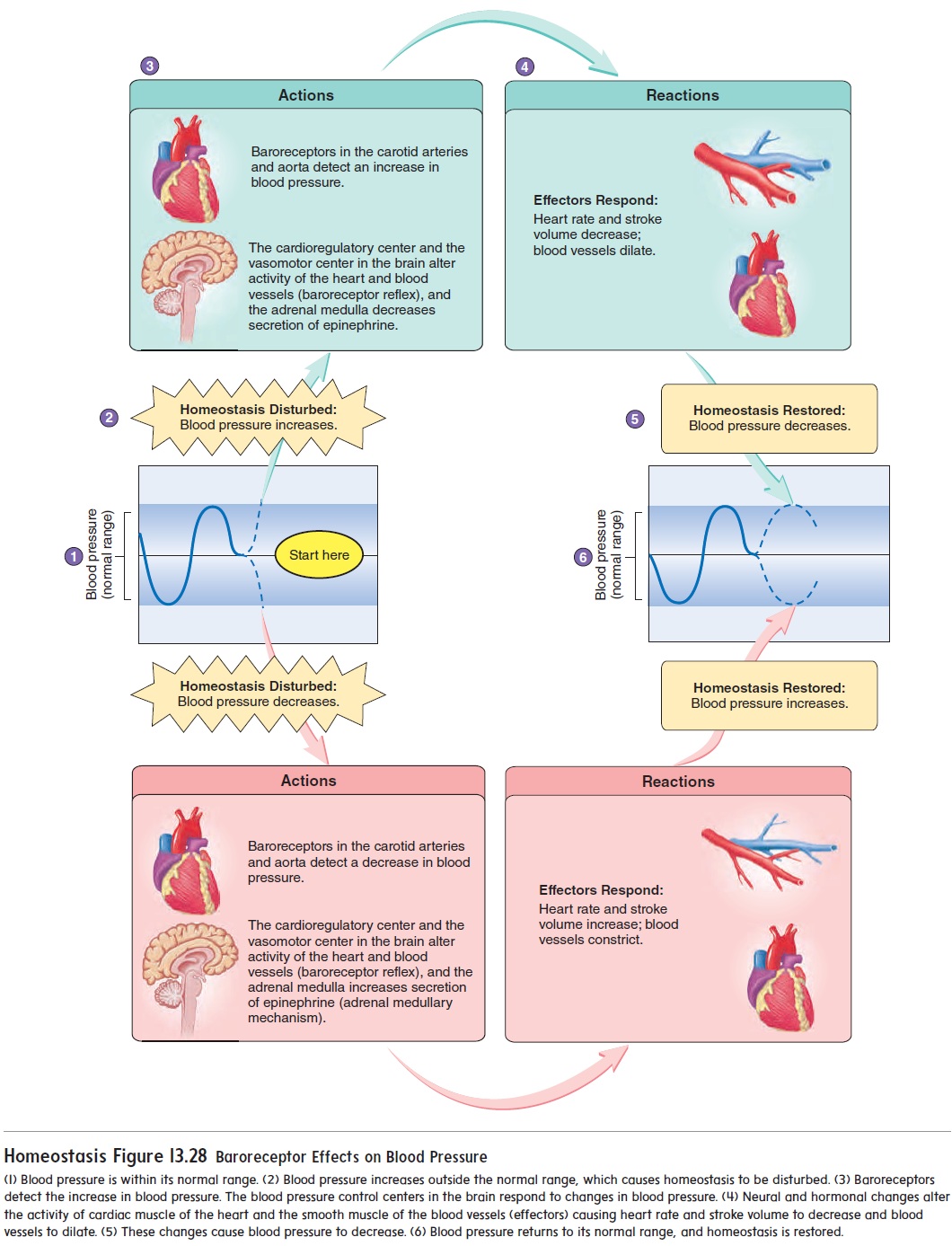 A sudden decrease in blood pressure results in a decreased action potential frequency in the baroreceptors. The decreased frequency of action potentials delivered to the vasomotor and car-dioregulatory centers in the medulla oblongata produces responses that raise blood pressure. Sympathetic stimulation of the heart increases, which increases the heart rate and stroke volume. In addition, vasomotor tone increases, resulting in constriction of blood vessels and increased peripheral resistance. The increased heart rate, stroke volume, and peripheral resistance raise the blood pressure toward its normal value (figure 13.28).

Carotid bodies are small structures that lie near the carotid sinuses,and aortic bodies lie near the aortic arch. These structures contain sensory receptors that respond to changes in blood O2 concentration, CO2 concentration, and pH. Because they are sensitive to chemical changes in the blood, they are called chemoreceptors. They send action potentials along sensory nerve fibers to the medulla oblon-gata. There are also chemoreceptors in the medulla oblongata. 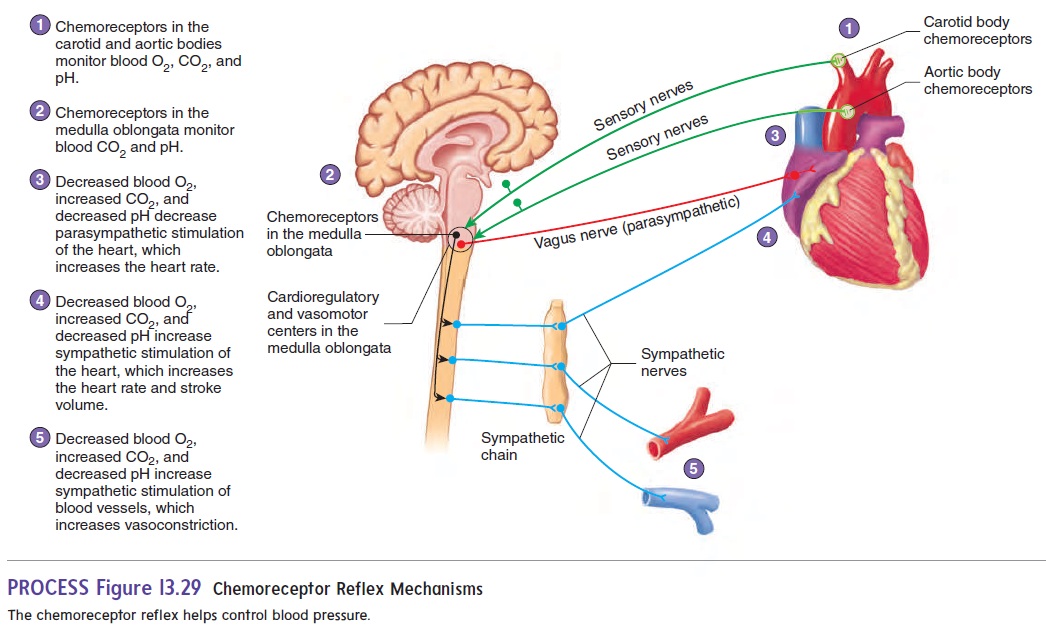 When O2 or pH levels decrease or when CO2 levels increase, the chemoreceptors respond with an increased frequency of action potentials and activate the chemoreceptor reflexes (figure 13.29). In response, the vasomotor and cardiovascular centers decrease parasympathetic stimulation of the heart, which increases the heart rate. The vasomotor and cardioregulatory centers also increase sympathetic stimulation of the heart, which further increases heart rate, stroke volume, and vasomotor tone. All these changes result in increased blood pressure. This increased blood pressure causes a greater rate of blood flow to the lungs, which helps raise blood O2levels and reduce blood CO2 levels. The chemoreceptorreflexes function under emergency conditions and usually do not play an important role in regulating the cardiovascular system. They respond strongly only when the O2 levels in the blood fall to very low levels or when CO2 levels become substantially elevated.

Stimuli that lead to increased sympathetic stimulation of the heart and blood vessels also cause increased stimulation of the adrenal medulla. The adrenal medulla responds by releasing epinephrine and small amounts of norepinephrine into the blood (figure 13.30). Epinephrine increases heart rate and stroke volume and causes vasoconstriction, especially of blood vessels in the skin and viscera. Epinephrine also causes vasodilation of blood vessels in skeletal muscle and cardiac muscle, thereby increasing the sup-ply of blood flowing to those muscles and preparing the body for physical activity. 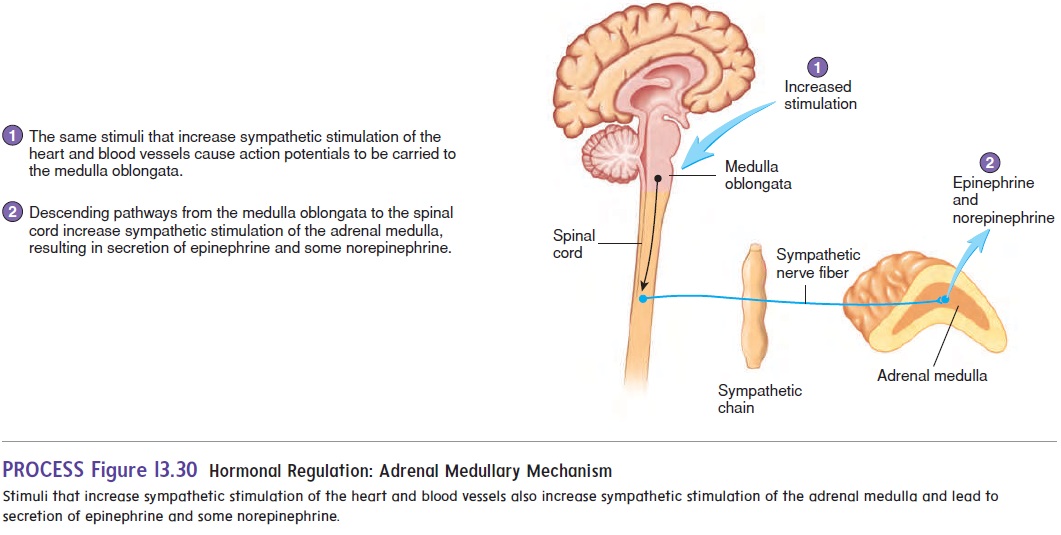 In response to reduced blood flow, the kidneys release an enzyme called renin (rē′ nin) into the circulatory system (figure 13.31). Renin acts on the blood protein angiotensinogen (an′ jē-ō-ten-sin′ ō-jen) to produce angiotensin I (an-jē-ō-ten′ sin). Another enzyme, called angiotensin-converting enzyme (ACE), found in large amounts in organs, such as the lungs, acts on angiotensin I to convert it to its most active form, angiotensin II. Angiotensin II is a potent vasoconstrictor. Thus, in response to reduced blood pressure, the kidneys’ release of renin increases the blood pressure toward its normal value. 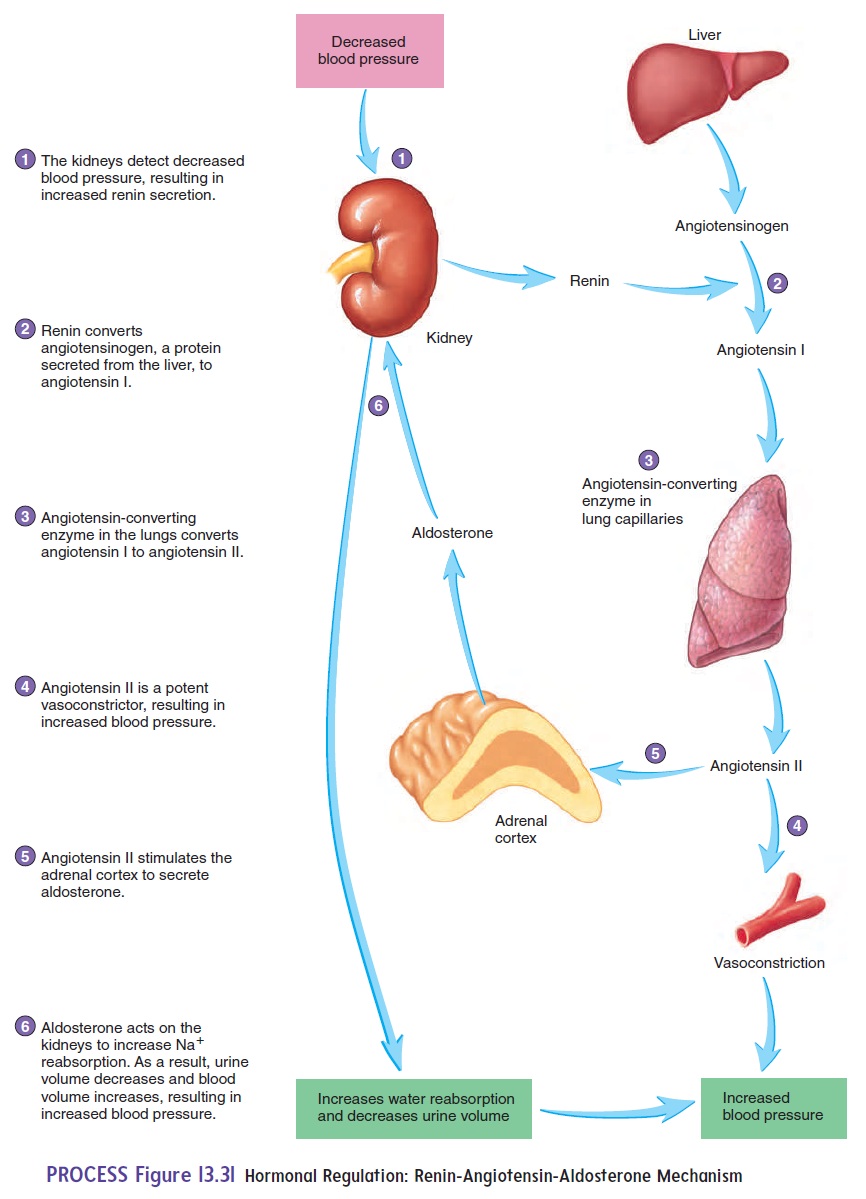 Angiotensin II also acts on the adrenal cortex to increase the secretion of aldosterone (al-dos′ ter-ō n). Aldosterone acts on the kidneys, causing them to conserve Na+ and water. As a result, the volume of water lost from the blood into the urine is reduced. The decrease in urine volume results in less fluid loss from the body, which maintains blood volume. Adequate blood volume is essential to maintain normal venous return to the heart and thereby maintain blood pressure .

When the concentration of solutes in the plasma increases or when blood pressure decreases substantially, nerve cells in the hypo-thalamus respond by causing the release of antidiuretic (an′ tē -d̄ı - ̄u -ret′ ik; to decrease urine production) hormone (ADH), also calledvasopressin (v̄a-sō-pres′in; to cause vasoconstriction), from theposterior pituitary gland (figure 13.32). ADH acts on the kidneys and causes them to absorb more water, thereby decreasing urine volume. This response helps maintain blood volume and blood pres-sure. The release of large amounts of ADH causes vasoconstriction of blood vessels, which causes blood pressure to increase. 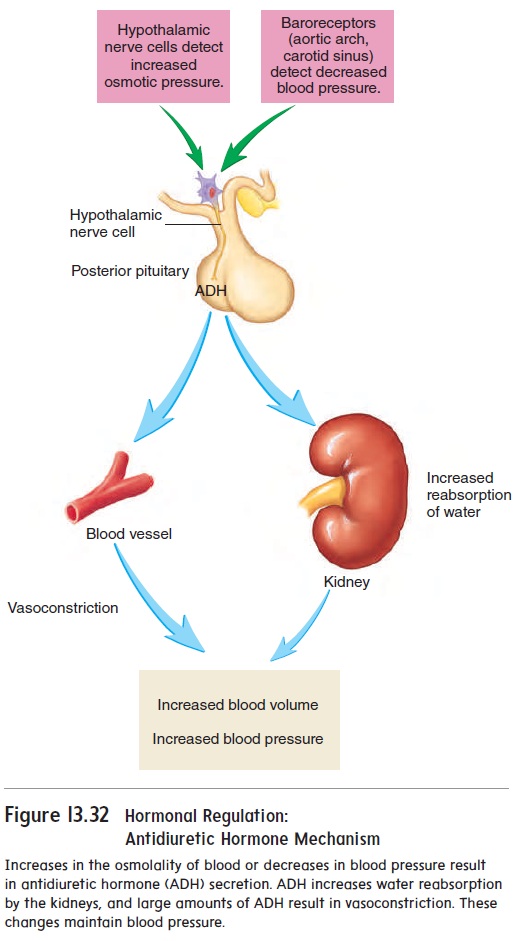 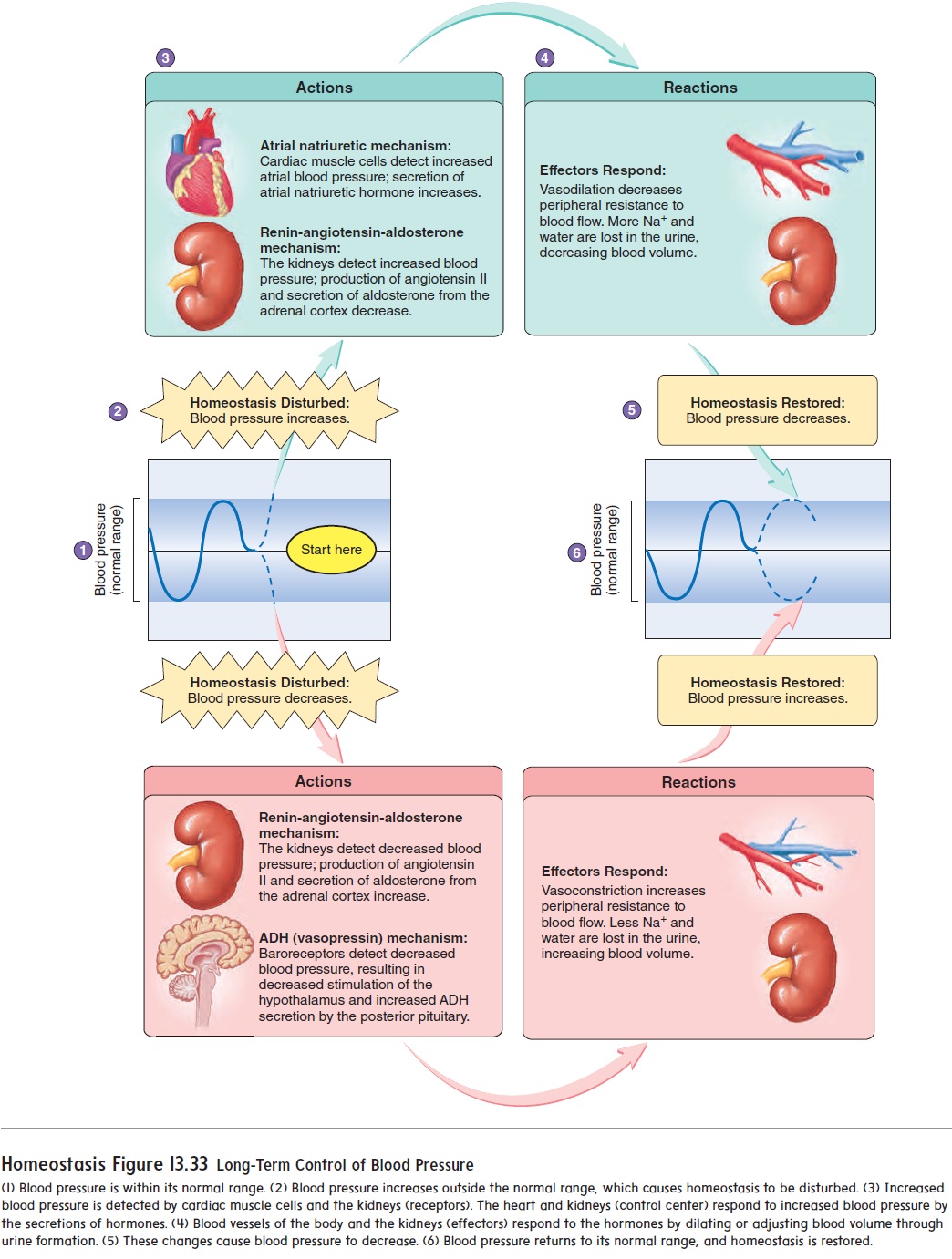