A. list the major arteries that supply each of the body areas, and describe their functions. 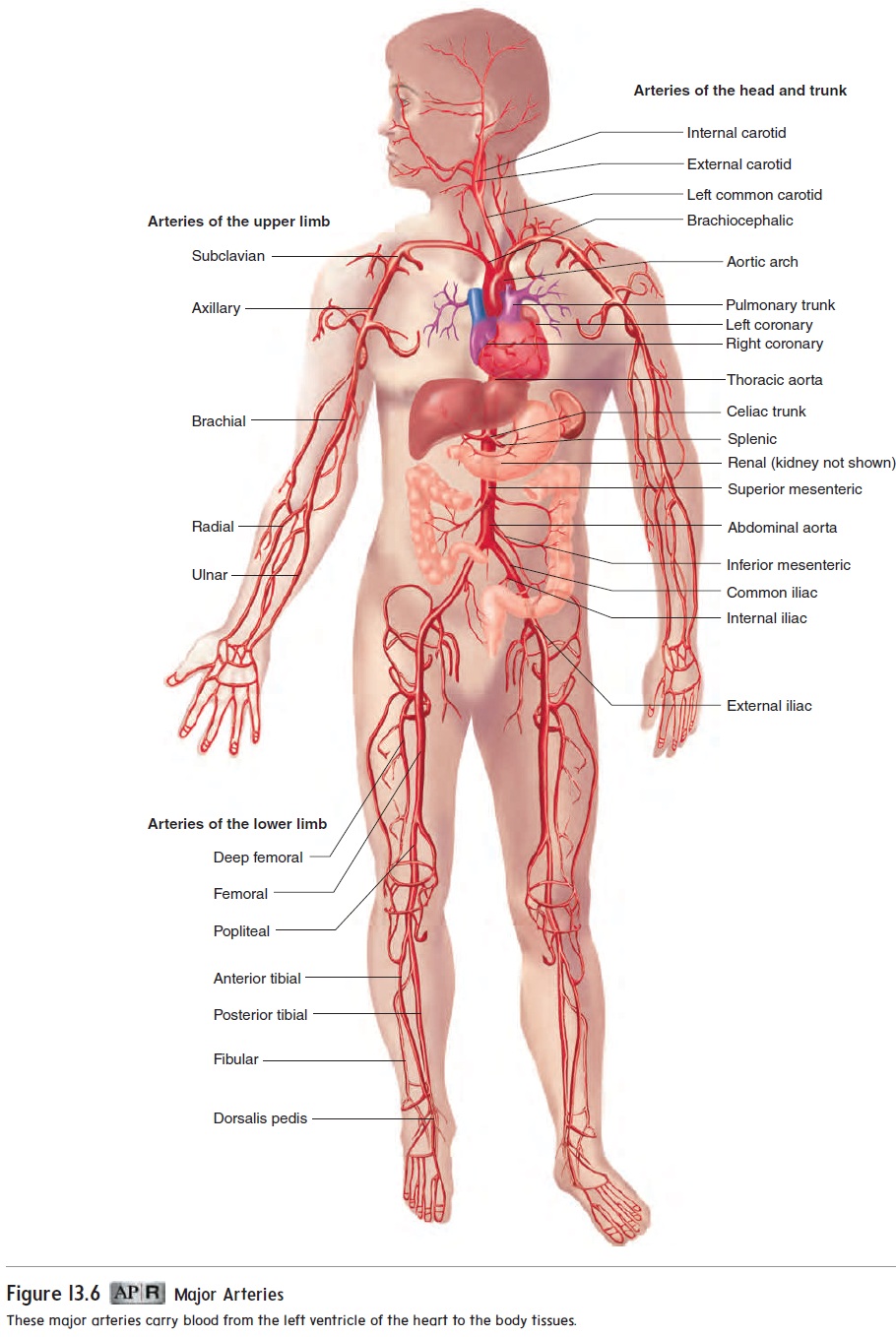 All arteries of the systemic circulation branch directly or indi-rectly from the aorta (ā -ō r′ t̆a ). The aorta is usually considered in three parts—the ascending aorta, the aortic arch, and the descend-ing aorta; the last segment is further divided into the thoracic aorta and the abdominal aorta (figure 13.7a). 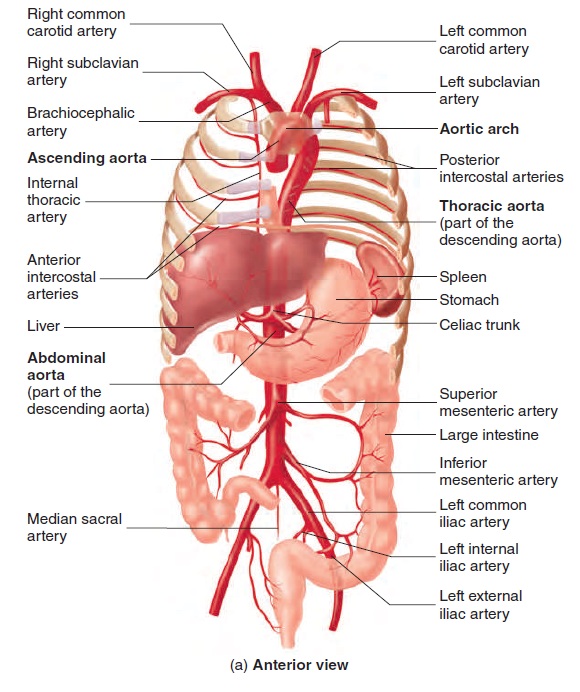 The aorta arches posteriorly and to the left as the aortic arch. Three major arteries, which carry blood to the head and upper limbs, originate from the aortic arch: the brachiocephalic artery, the left common carotid artery, and the left subclavian artery (figure 13.7b). 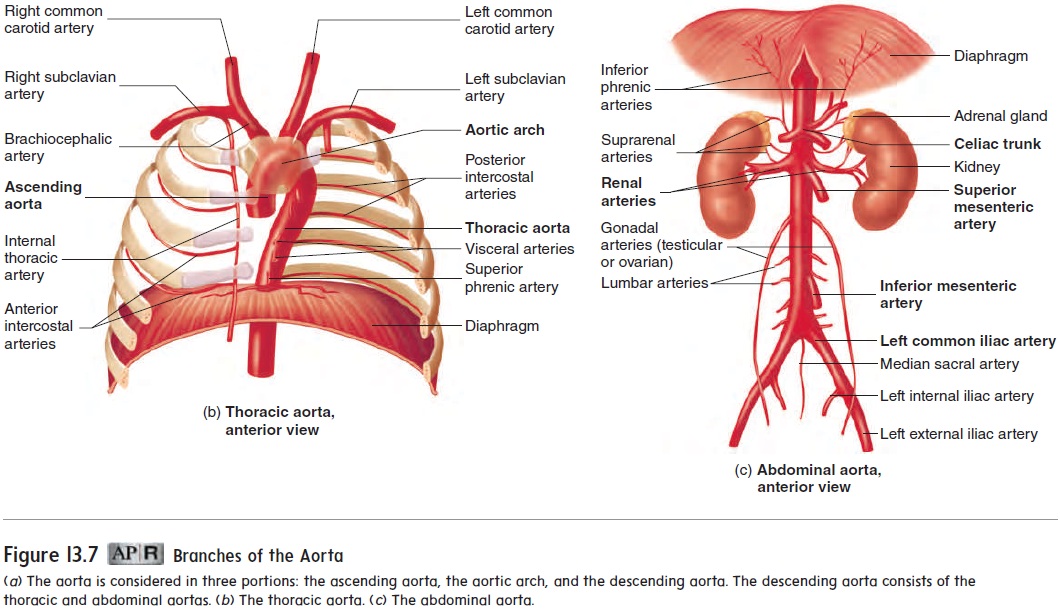 An arterial aneurysm (an′ ū -rizm; a dilation) is a localized dilation of an artery that usually develops in response to trauma or a congenital (existing at birth) weakness of the artery wall. Rupture of a large aneurysm in the aorta is almost always fatal, and rupture of an aneurysm in an artery of the brain causes massive damage to brain tissue and even death. If aneurysms are discovered, they can sometimes be surgically corrected. For example, large aortic aneurysms that leak blood slowly can often be repaired.

Arteries of the head and neck

Figure 13.8 depicts the arteries of the head and neck, and figure 13.9 shows how these arteries connect to each other and to the arteries of the thorax. It may help you to refer to figure 13.9 as you read the following discussion. The first vessel to branch from the aor-tic arch is the brachiocephalic (br̄a ′ kē - ō -se-fal′ ik; vessel to the arm and head) artery. This short artery branches at the level of the clavicle to form the right common carotid (ka-rot′ id) artery, which transports blood to the right side of the head and neck, and the right subclavian (sŭb-kl̄a′vē-an; beneath the clavicle) artery, which transports blood to the right upper limb (see figures 13.7b and 13.8). 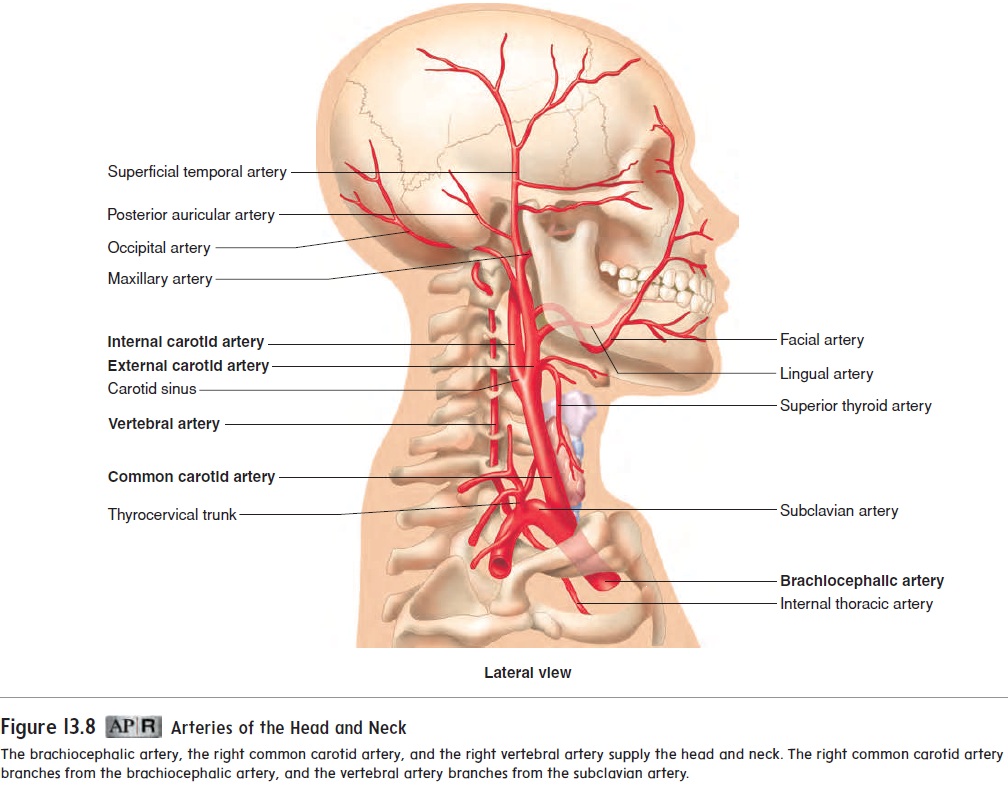 There is no brachiocephalic artery on the left side of the body. Instead, both the left common carotid and the left subclavian arter-ies branch directly off the aortic arch (see figures 13.6, 13.7a,b, and 13.9). They are the second and third branches of the aortic arch. The left common carotid artery transports blood to the left side of the head and neck, and the left subclavian artery transports blood to the left upper limb. 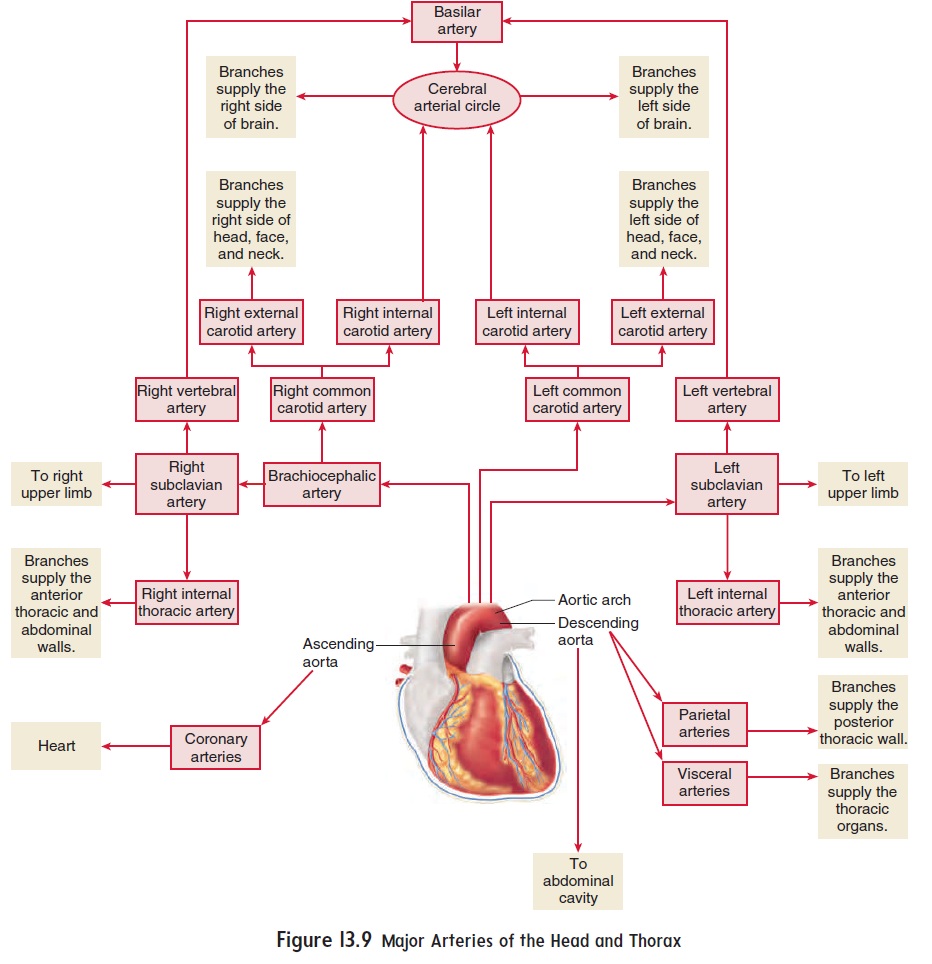 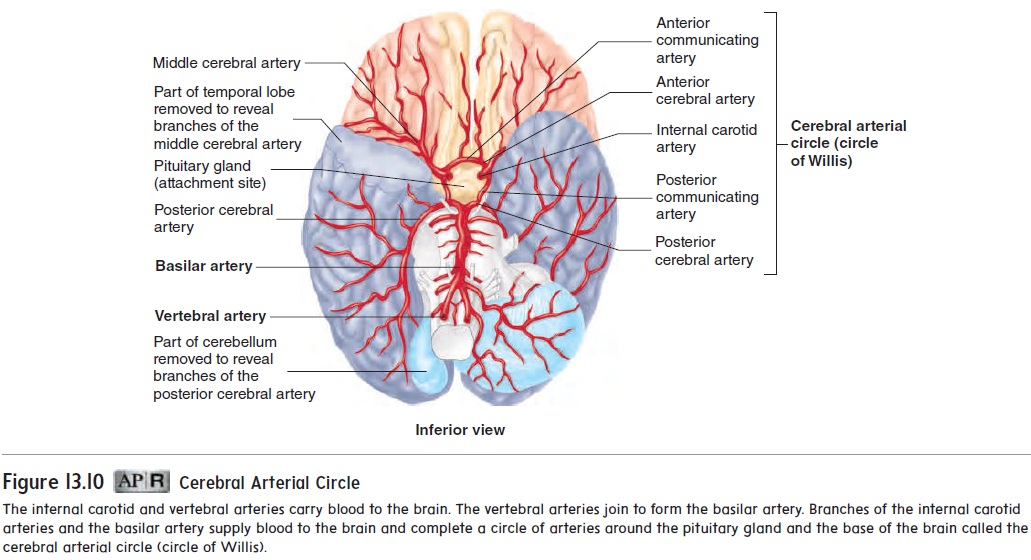 Within the cranial cavity, the vertebral arteries unite to form a single basilar (bas′i-lăr; relating to the base of the brain) artery located along the anterior, inferior surface of the brainstem (fig-ure 13.10). The basilar artery gives off branches that supply blood to the pons, cerebellum, and midbrain. It also forms right and left branches that contribute to the cerebral arterial circle. Most of the blood supply to the brain is through the internal carotid arteries; however, not enough blood is supplied to the brain to maintain life if either the vertebral arteries or the carotid arteries are blocked.

Arteries of the Upper Limbs

The arteries of the upper limbs are named differently as they pass into different body regions, even though no major branching occurs. The subclavian artery, located deep to the clavicle, becomes the axillary(ak′sil-ār-ē) artery in the axilla (armpit). The brachial (brā′kē-ăl) artery, located in the arm, is a continuation of the axillary­ artery (figure 13.11). Blood pressure measurements are normally taken from the brachial artery. The brachial artery branches at the elbow to form the ulnar (ul′năr) artery and the radial (rā′dē-ăl) artery, which supply blood to the forearm andhand. The radial artery is the one most commonly used for taking a pulse. The pulse can be detected easily on the thumb (radial) side of the anterior surface of the wrist 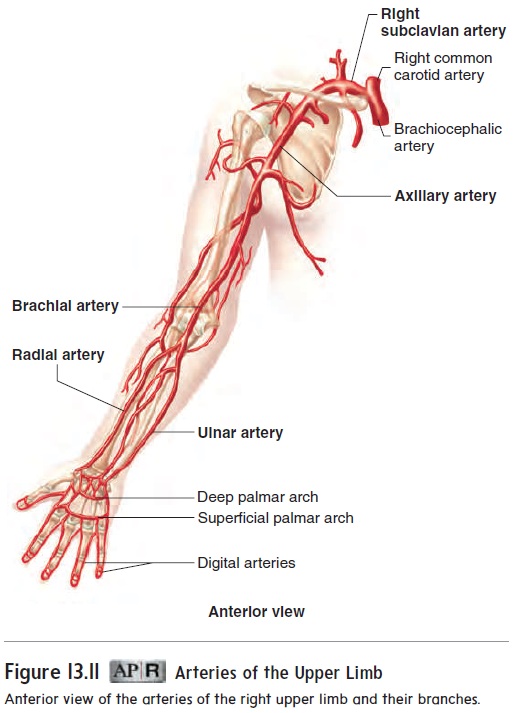 Thoracic Aorta And Its Branches

The internal thoracic arteries are branches of the subclavian arteries. They descend along the internal surface of the anterior thoracic wall and give rise to branches called the anterior intercostalarteries,which extend between the ribs to supply the anterior chestwall (see figure 13.7a,b).

Abdominal Aorta and its Branches

The branches of the abdominal aorta, like those of the thoracic aorta, can be divided into visceral and parietal groups. The visceral arter-ies are divided into paired and unpaired branches. There are three major unpaired branches: the celiac (sē ′ lē -ak; belly) trunk, the superior mesenteric (mez-en-ter′ik) artery, and the inferior mesenteric artery. The celiac trunk supplies blood to the stomach,pancreas, spleen, upper duodenum, and liver. 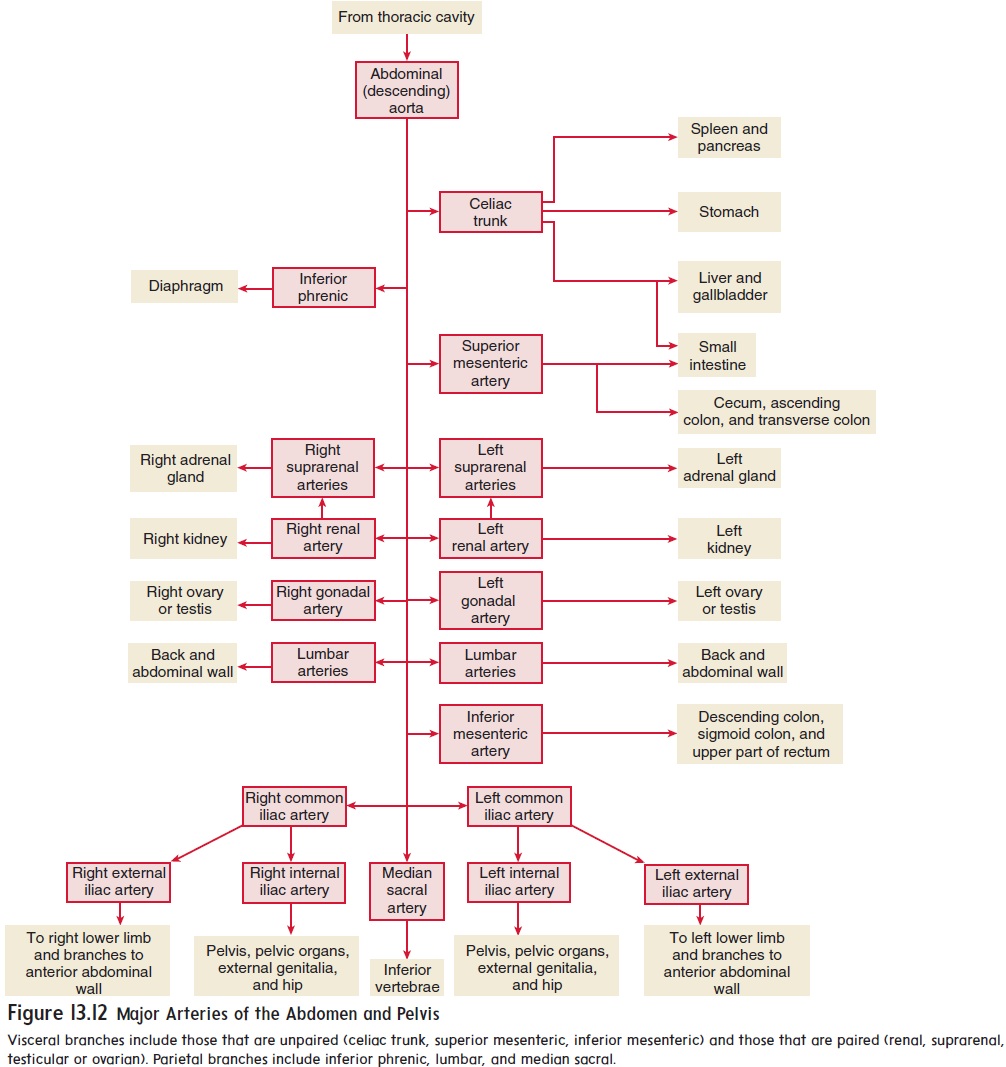 Arteries of the Pelvis

Arteries of the lower limbs

The femoral triangle is located in the superior and medial area of the thigh. Its margins are formed by the inguinal ligament, the medial margin of the sartorius muscle, and the lateral margin of the adductor longus muscle (see figures 7.14a and 7.26a). Passing 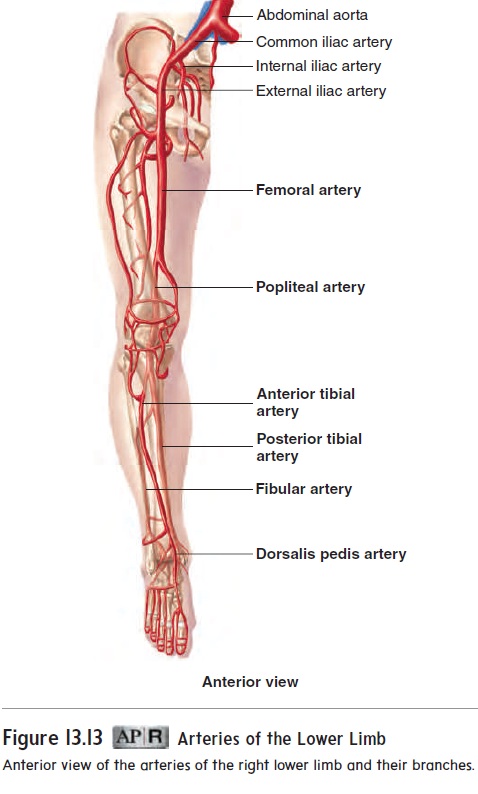