The more formal name for platelets is thrombocytes, which are not whole cells but rather fragments or pieces of cells.

The more formal name for platelets is thrombocytes, which are not whole cells but rather fragments or pieces of cells. Some of the stem cells in the red bone marrow differentiate into large cells called megakary-ocytes (see Figs. 11–2 and 11–3), which break up into small pieces that enter circulation. These small, oval, circulating pieces are platelets, which may last for 5 to 9 days, if not utilized before that. Thrombopoietin is a hormone produced by the liver that increases the rate of platelet production. 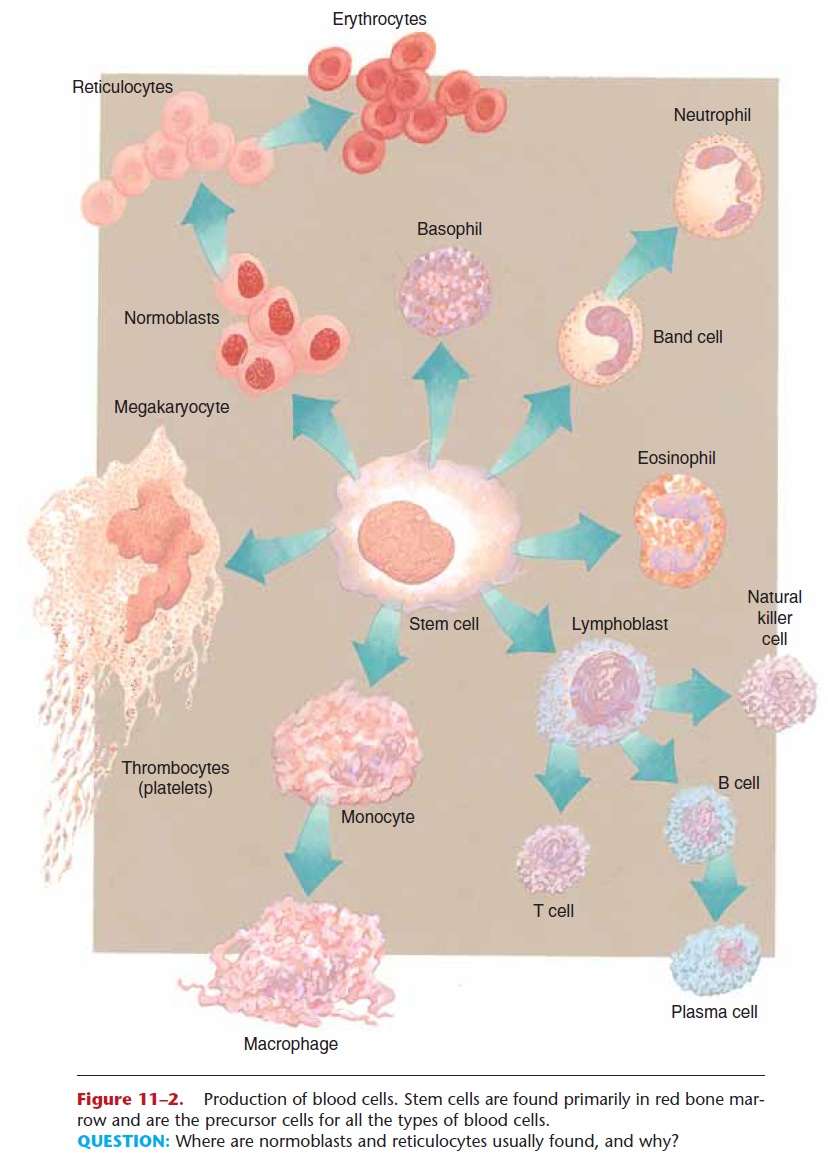 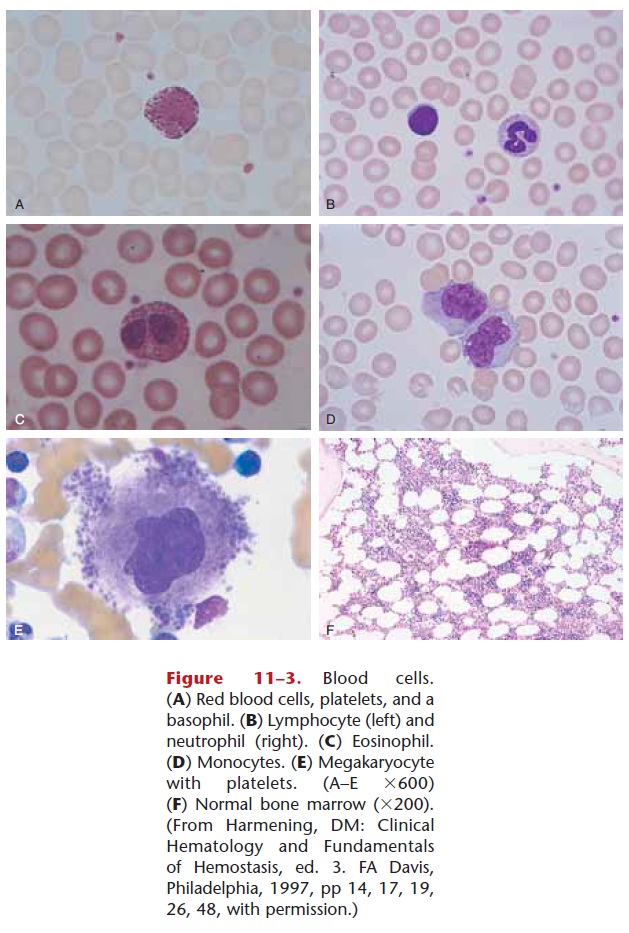 Platelets are necessary for hemostasis, which means prevention of blood loss. There are three mechanisms, and platelets are involved in each. Two of these mech-anisms are shown in Fig. 11–6. 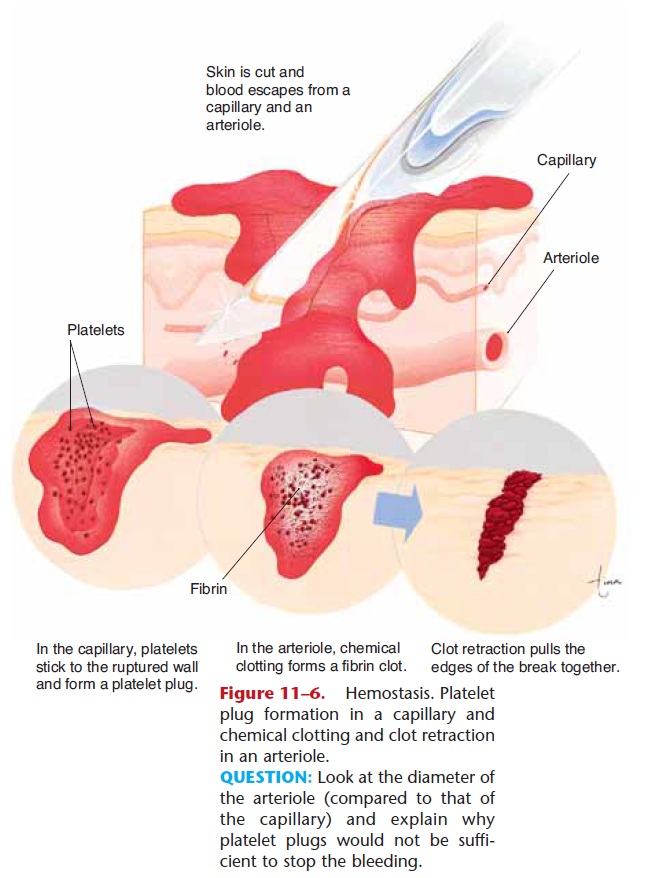 Figure 11–6. Hemostasis. Platelet plug formation in a capillary and chemical clotting and clot retraction in an arteriole.

QUESTION: Look at the diameter of the arteriole (compared to that of the capillary) and explain why platelet plugs would not be suffi-cient to stop the bleeding.

1. Vascular spasm—when a large vessel such as an artery or vein is severed, the smooth muscle in its wall contracts in response to the damage (called the myogenic response). Platelets in the area of the rupture release serotonin, which also brings about vasoconstriction. The diameter of the vessel is thereby made smaller, and the smaller opening may then be blocked by a blood clot. If the vessel did not constrict first, the clot that forms would quickly be washed out by the force of the blood pressure.

2. Platelet plugs—when capillaries rupture, the damage is too slight to initiate the formation of a

blood clot. The rough surface, however, causes platelets to change shape (become spiky) and become sticky. These activated platelets stick to the edges of the break and to each other. The platelets form a mechanical barrier or wall to close off the break in the capillary. Capillary ruptures are quite frequent, and platelet plugs, although small, are all that is needed to seal them.

Would platelet plugs be effective for breaks in larger vessels? No, they are too small, and though they do form, they are washed away (until a clot begins to form that can contain them). Would vas-cular spasm be effective for capillaries? Again, the answer is no, because capillaries have no smooth muscle and cannot constrict at all.

3. Chemical clotting—The stimulus for clotting is a rough surface within a vessel, or a break in the ves-sel, which also creates a rough surface. The more damage there is, the faster clotting begins, usually within 15 to 120 seconds.

The clotting mechanism is a series of reactions involving chemicals that normally circulate in the blood and others that are released when a vessel is damaged.

The chemicals involved in clotting include platelet factors, chemicals released by damaged tissues, cal-cium ions, and the plasma proteins prothrombin, fi-brinogen, Factor 8, and others synthesized by the liver. (These clotting factors are also designated by Roman numerals; Factor 8 would be Factor VIII.) Vitamin K is necessary for the liver to synthesize prothrombin and several other clotting factors (Factors 7, 9, and 10). Most of our vitamin K is produced by the bacteria that live in the colon; the vitamin is absorbed as the colon absorbs water and may be stored in the liver.

Chemical clotting is usually described in three stages, which are listed in Table 11–3 and illustrated in Fig. 11–7. Stage 1 begins when a vessel is cut or dam-aged internally, and includes all of the factors shown. As you follow the pathway, notice that the product of stage 1 is prothrombin activator, which may also be called prothrombinase. Each name tells us something. The first name suggests that this chemical activates prothrombin, and that is true. The second name ends in “ase,” which indicates that this is an enzyme. The traditional names for enzymes use the substrate of the enzyme as the first part of the name, and add “ase.” So this chemical must be an enzyme whose substrate is

prothrombin, and that is also true. The stages of clot-ting may be called a cascade, where one leads to the next, as inevitable as water flowing downhill. Pro-thrombin activator, the product of stage 1, brings about the stage 2 reaction: converting prothrombin to thrombin. The product of stage 2, thrombin, brings about the stage 3 reaction: converting fibrinogen to fibrin. 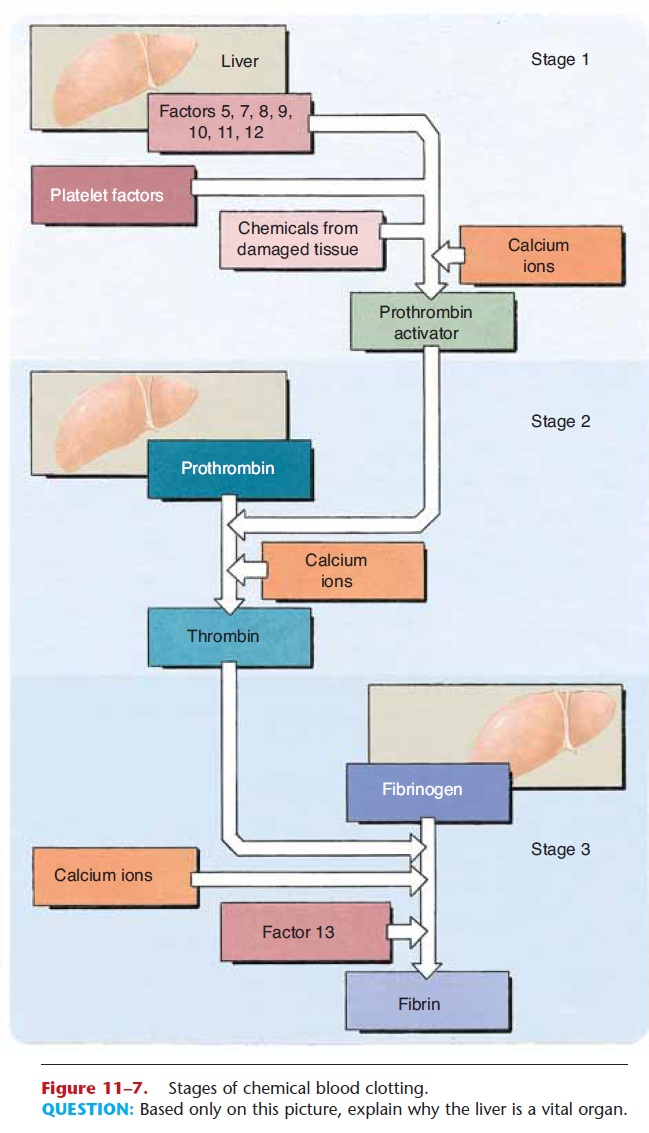 QUESTION: Based only on this picture, explain why the liver is a vital organ.

The clot itself is made of fibrin, the product of stage 3. Fibrin is a thread-like protein. Many strands of fibrin form a mesh that traps RBCs and platelets, and creates a wall across the break in the vessel.

Once the clot has formed and bleeding has stopped, clot retraction and fibrinolysis occur. Clot retraction requires platelets, ATP, and Factor 13 and involves folding of the fibrin threads to pull the edges of the rupture in the vessel wall closer together. This will make the area to be repaired smaller. The platelets contribute in yet another way, because as they disinte-grate they release platelet-derived growth factor (PDGF), which stimulates the repair of blood vessels (growth of their tissues). As repair begins, the clot is dissolved, a process called fibrinolysis. It is important that the clot be dissolved, because it is a rough surface, and if it were inside a vessel it would stimulate more and unnecessary clotting, which might eventually obstruct blood flow.