Explain the basis of ABO and Rh incompatibilities.

If large quantities of blood are lost during surgery or due to inju-ry, a patient can go into shock and die unless red blood cells are replaced to restore the blood’s oxygen-carrying capacity. In this event, either a transfusion or an infusion is called for. A transfu-sion is the transfer of blood or blood components from one indi-vidual to another. An infusion is the introduction of a fluid other than blood, such as a saline or glucose solution, into the blood. In many cases, the return of blood volume to normal levels is all that is necessary to prevent shock. Eventually, the body produces enough red blood cells to replace those that were lost.

Early attempts to transfuse blood were often unsuccessful because they resulted in transfusion reactions, characterized by clumping or rupture of blood cells and clotting within blood ves-sels. We now know that transfusion reactions are caused by inter-actions between antigens and antibodies . In brief, the surfaces of red blood cells have molecules called antigens (an′ti-jenz), and the plasma includes proteins called antibodies (an′te-bod-ēz; anti-, against). Antibodies are very specific, mean-ing that each antibody can bind only to a certain antigen. When the antibodies in the plasma bind to the antigens on the surface of the red blood cells, they form molecular bridges that connect the red blood cells together. As a result, agglutination (ă-gloo-ti-nā′shŭn; ad, to+ gluten, glue), or clumping of the cells, occurs. The com-bination of the antibodies with the antigens can also initiate reac-tions that cause hemolysis (hē-mol′i-sis; hemo-, blood + lysis,destruction), or rupture of the red blood cells. The debris formed from the ruptured red blood cells can cause severe tissue damage, particularly in the kidneys. Hemoglobin released from lysed red blood cells can damage kidney tissue, reducing its blood-filtering ability. If the damage is extensive, the lack of kidney function could result in death.

The ABO blood group system is used to categorize human blood. In this blood group system, there are two types of antigens that may appear on the surface of the red blood cells, type A antigen and type B antigen. Type A blood has type A antigens, type B blood has type B antigens, and type AB blood has both types of antigens. Type O blood has neither A nor B antigens (figure 11.11). Antibodies against the antigens are usually present in the plasma of blood. Plasma from type A blood contains anti-B antibodies, which act against type B antigens; plasma from type B blood contains anti-A antibodies, which act against type A antigens. Type AB blood plasma has neither type of antibody, and type O blood plasma has both anti-A and anti-B antibodies. Historically, people with type O blood have been called uni-versal donors because they can usually give blood to the other ABO blood types without causing an ABO transfusion reaction. Their red blood cells have no ABO surface antigens and therefore do not react with the recipient’s anti-A or anti-B antibodies. For example, if a person with type A blood receives type O blood, the type O red blood cells do not react with the anti-B antibodies in the recipient’s blood. Another important blood group is the Rh blood group, so named because it was first studied in the rhesus monkey. People are Rh-positive if they have certain Rh antigens on the surface of their red blood cells, and they are Rh-negative if they do not have these Rh antigens. About 85% of caucasians and 95% of African-Americans are Rh-positive. The ABO blood type and the Rh blood type are usually expressed together. For example, a person designated as type A in the ABO blood group and Rh-positive is said to be A-positive. The rarest combination in the United States is AB-negative, which occurs in less than 1% of the population.

Rh incompatibility can pose a major problem in a pregnancy when the mother is Rh-negative and the fetus is Rh-positive. If fetal blood leaks through the placenta and mixes with the mother’s blood, the mother becomes sensitized to the Rh antigen. The mother pro-duces anti-Rh antibodies that cross the placenta and cause aggluti-nation and hemolysis of fetal red blood cells. This disorder is called hemolytic(hē-mō-lit′ik) disease of the newborn (HDN), oreryth-roblastosis fetalis (ĕ-rith′rō-blas-tō′sis fē-ta′lis) (figure 11.13). Inthe mother’s first pregnancy, there is often no problem. The leakage of fetal blood is usually the result of a tear in the placenta that takes place either late in the pregnancy or during delivery. Thus, there is not sufficient time for the mother to produce enough anti-Rh anti-bodies to harm the fetus. In later pregnancies, however, a problem can arise because the mother has been sensitized to the Rh antigen. Consequently, if the fetus is Rh-positive and if any fetal blood leaks into the mother’s blood, she rapidly produces large amounts of anti-Rh antibodies, which can cross the placenta to the fetus, result-ing in HDN. Because HDN can be fatal to the fetus, the levels of anti-Rh antibodies in the mother’s blood should be monitored. If they increase to unacceptable levels, the fetus should be tested to determine the severity of the HDN. In severe cases, a transfusion to replace lost red blood cells can be performed through the umbilical cord, or the baby can be delivered if mature enough. 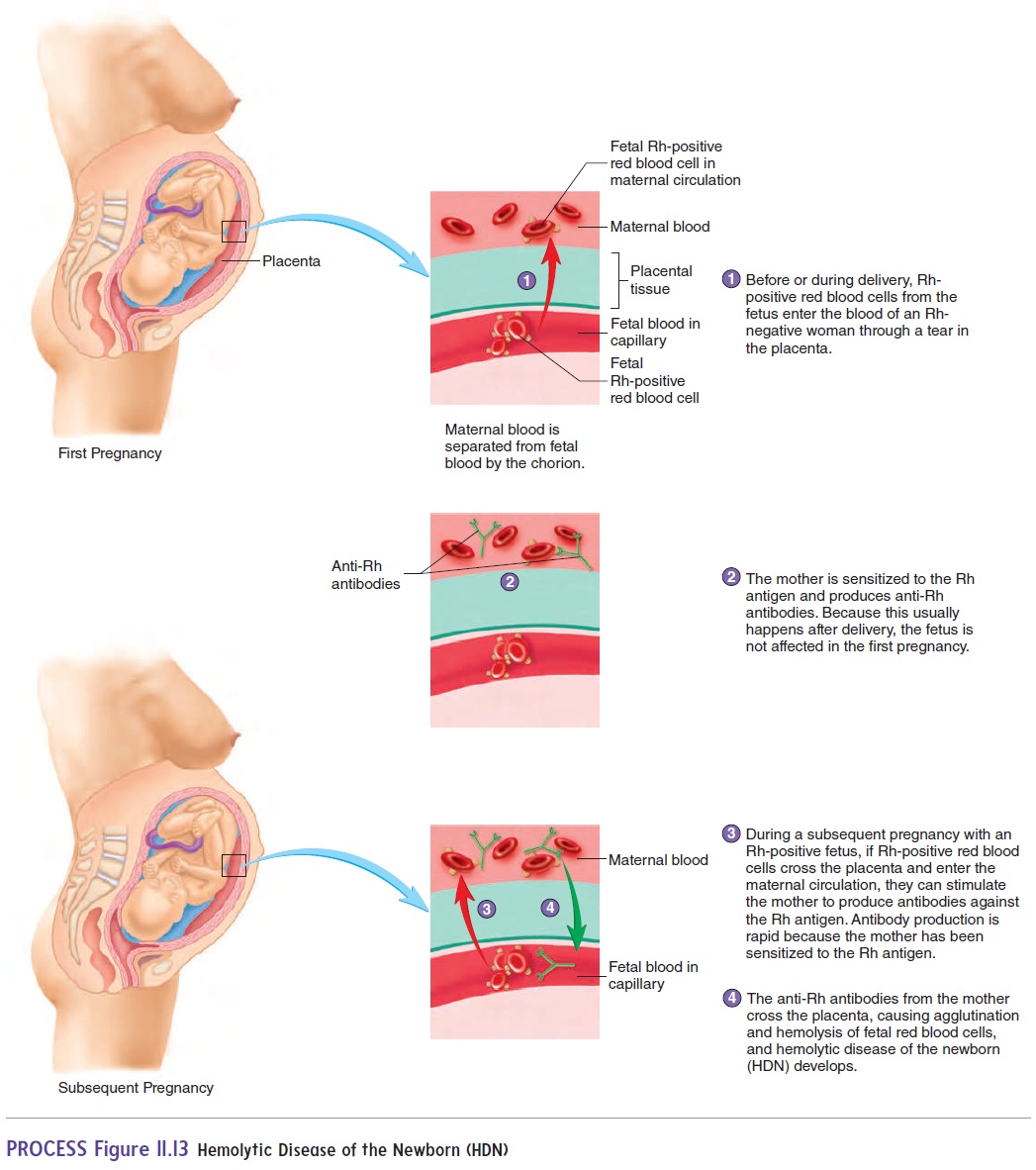 Prevention of HDN is often possible if the Rh-negative mother is injected with a specific preparation called Rho(D) immune globu-lin (RhoGAM), which contains antibodies against Rh antigens. The injection can be given during the pregnancy, before delivery, or immediately after each delivery, miscarriage, or abortion. The injected antibodies bind to the Rh antigens of any fetal red blood cells that may have entered the mother’s blood. This treatment inac-tivates the fetal Rh antigens and prevents sensitization of the mother.