As already mentioned, the outer membranes of chloroplasts and mito-chondria appear to be unspecifically permeable to metabolites such as, for instance, nucleotides and sugar phosphates.

As already mentioned, the outer membranes of chloroplasts and mito-chondria appear to be unspecifically permeable to metabolites such as, for instance, nucleotides and sugar phosphates. This relatively unspecific per-meability is due to pore-forming proteins named porins. These porins rep-resent a family of proteins which are entirely different from the channel and translocator proteins.

The size of the aperture of the pore formed by a porin can be determined by incorporating porins into an artificial lipid membrane that separates two chambers filled with an electrolyte (Fig. 1.30). Membrane proteins, which have been solubilized in a detergent, are added to one of the two cham-bers. Because of their hydrophobicity, the porin molecules incorporate, one after another, into the artificial lipid membrane. Each time a new channel is formed, a stepwise increase of conductivity is observed. Each step in con-ductivity corresponds to the conductivity of a single pore. Therefore it is possible to evaluate the size of the aperture of the pore from the conductiv-ity of the electrolyte fluid. Thus the size of the aperture for the porin pore of mitochondria has been estimated to be 1.7 nm and that of chloroplasts about 3 nm. 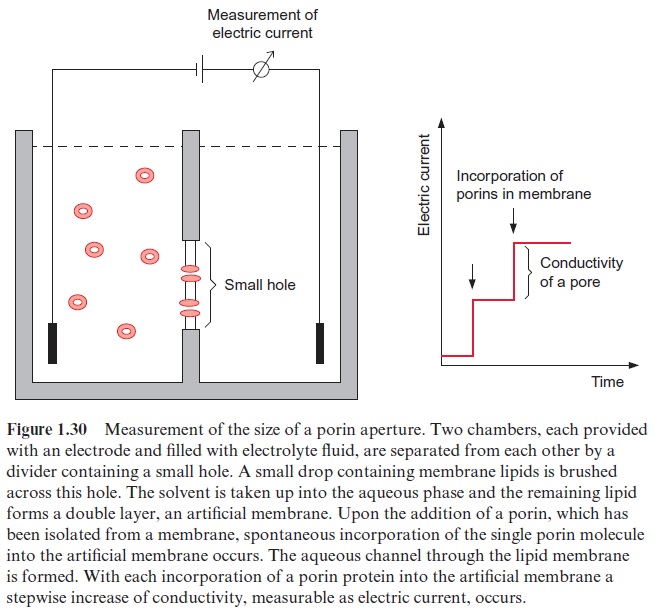 Porins have been first identified in the outer membrane of Gram negative bacteria, such as Escherichia coli. In the meantime, several types of porins, differing in their properties, have been characterized. General porins form unspecific diffusion pores, consisting of a channel containing water, allowing the diffusion of substrate molecules. These porins consist of subunits with a molecular mass of about 30 kDa. Porins in the membrane often occur as trimers, in which each of the three subunits forms a pore. Porins differ dis-tinctly from the translocator proteins in that they have no exclusively hydro-phobic regions in their amino acid sequence, a requirement for forming transmembrane helices. Analysis of the three-dimensional structure of a bac-terial porin by X-ray structure analysis  revealed that the walls of the pore are formed by β-sheet structures (Fig. 1.31). Altogether, 16 β- sheets, each consisting of about 13 amino acids, connected to each other by hydrogen bonds, form a pore (Fig. 1.32A). This structure resembles a barrel in which the β-sheets represent the barrel staves. Hydrophilic and hydropho-bic amino acids alternate in the amino acid sequences of theβ-sheets. One side of the β-sheet, occupied by hydrophobic residues, is directed towards the lipid membrane phase. The other side, with the hydrophilic residues, is directed towards the aqueous phase inside the pore (Fig. 1.32B). Compared with the ion channel proteins, the porins have an economical structure in the sense that a much larger channel is formed by one porin molecule than by a channel protein that has a two times higher molecular mass.

Another type of porin forms selective pores, which contain binding sites for ionic and non-ionic substrates (e.g., carbohydrates). In E. coli a mal-todextrin-binding porin was found to consist of 16 β-sheets, with loops in between, which protrude into the aqueous channel of the pore and contain the corresponding substrate binding sites.

The mitochondrial porin resembles in its structure the bacterial general porin. It also consists of 16 β-sheets. The measurement of porin activity in artificial lipid bilayer membranes (Fig. 1.30) revealed that the open pore had slight anion selectivity. Applying a voltage of 30 mV closes the pore to a large extent and renders it cation specific. For this reason the mito-chondrial porin has been named voltage-dependent anion selective channel (VDAC). The physiological function of this voltage-dependent regulation of the pore opening remains to be elucidated. 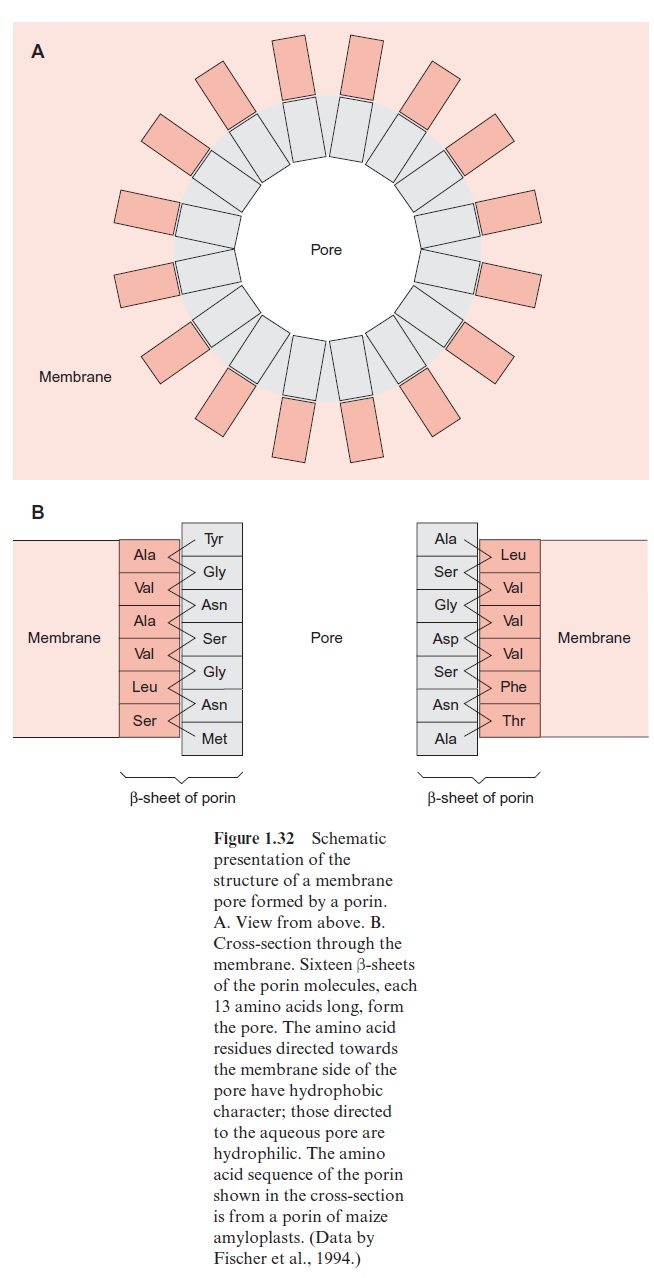 In chloroplasts the outer envelope membrane was found to contain a porin with a molecular mass of 24 kDa (outer envelope protein,OEP24), forming an unspecific diffusion pore. OEP24 resembles in its function the mitochondrial VDAC, although there is no sequence homology between them. OEP24, in its open state, allows the diffusion of various metabolites.

Moreover, the outer envelope membrane of chloroplasts contains another porin (OEP21) forming an anion selective channel. OEP21 especially enables the diffusion of phosphorylated metabolites such as dihydroxyacetone phosphate and 3-phosphoglycerate. The opening of this pore is regulated by the binding of substrates. Another pore forming pro-tein is located in the membrane of peroxisomes .