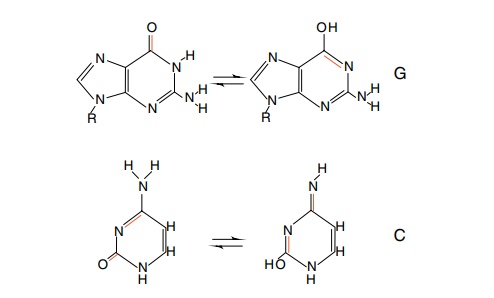 In addition to substitutions of one nucleotide for another in single-stranded DNA or one base pair for another in double-stranded DNA, nucleotides are susceptible to many types of chemical modification. These can include tautomerizations and deamination or more extensive damage such as the complete loss of a base from the ribose phosphate backbone (Fig. 8.1). The cellular repair mechanisms, however, remove many such modified bases so that the gap can be refilled with normal nucleotides. Those modified bases that escape repair cannot themselves be passed on to the next generation because, on DNA replication, one of the usual four nucleotides is incorporated into the daughter strand opposite the altered base. Frequently the base so incorporated will be incorrect, and consequently, a mutation is introduced at such a position.

Mutations arise from a variety of sources. As discussed, point mutations can occur spontaneously during replication of the DNA through the misincorporation of a nucleotide and the failure of the editing mechanisms to correct the mistake or through the chemical instability of the nucleotides. For example, cytosine can deaminate to form uracil, which is then recognized as thymine during DNA replica-tion.

The frequency of spontaneous appearance of point mutations often is too low for convenient experimentation, and mutagens are therefore used to increase the frequency of mutants in cultures 10 to 1,000 times above the spontaneous frequency. A variety of mutagens have been discovered, some by rational considerations and some by chance. Many are nucleotide analogs that are incorporated into the DNA instead of the normal nucleotides. These increase the frequency of mispairing in subsequent rounds of DNA replication. Other mutagens are chemically reactive molecules that damage or modify bases in DNA. Ultraviolet light is also a mutagen as discussed earlier. The damage it creates ultimately leads to mutations either through a reduced fidelity of syn-thesis or an elevated probability of mistaken repair of the original damage. In one way or another, mutagens increase the frequency of generating mispaired bases or increase the frequency that mispaired bases escape repair. Ultimately, either leads to an increase in the probability that the original DNA sequence will be changed.

The mechanisms generating deletions and insertions are not as well understood. Errors in DNA replication provide plausible mechanisms for the generation of one or two base insertions or deletions. Most likely slippage, perhaps stimulated by an appropriate sequence, will permit a daughter strand to possess a different number of bases than the parent strand.

Figure 8.2 Two mechanisms for generating deletions between repeated sequences. The first is looping with recombination between points within a single chromosome, and the second is unequal crossing over between two chromosomes. 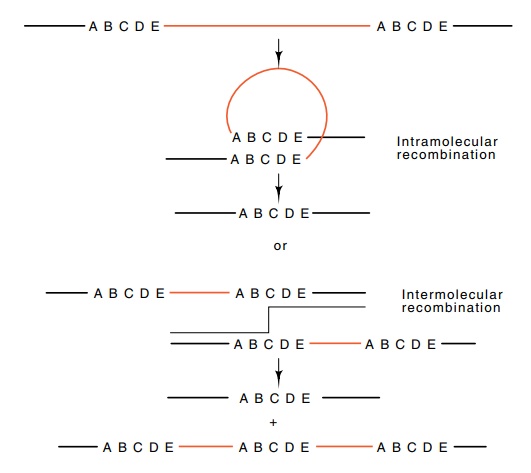 Insertions and deletions larger than a few bases arise by a different mechanism. The end points of a number of deletions in bacteria are located at short, repeated or almost repeated sequences. The deletion removes one of the repeats and the intervening sequence. We can picture two plausible events that could create such deletions (Fig. 8.2). The first is a looping of a single chromosome followed by elimination of the material between the two repeats. The second is similar to the first, but it occurs between two chromosomes and transfers the material from one chromosome to the other. One chromosome suffers a deletion and the other an insertion.

The creation of deletions is also stimulated by the presence of some genetic elements called insertion sequences or transposons. These ele-ments transpose themselves or copies of themselves into other sites on the chromosome. In the process they often generate deletions in their vicinity.