In aquaculture the common way to transport water is through pipes; open channels are also used in some cases. Channels may be used for transport into the farm, for distribution inside the farm and for the outlet of water.

In aquaculture the common way to transport water is through pipes; open channels are also used in some cases. Channels may be used for transport into the farm, for distribution inside the farm and for the outlet of water. They are normally built of concrete and are quite large; the water is transported with low velocity. Channels may also be excavated in earth, for example to supply the water to earth ponds. Advantages of open channels are their simple construction and the ease with which the water flow can be controlled visually; disadvantages are the requirement for a constant slope over the total length and there can be no pressure in an open channel. The greater exterior size compared to pipes, and the noise inside the building when water is flowing are other disadvantages. 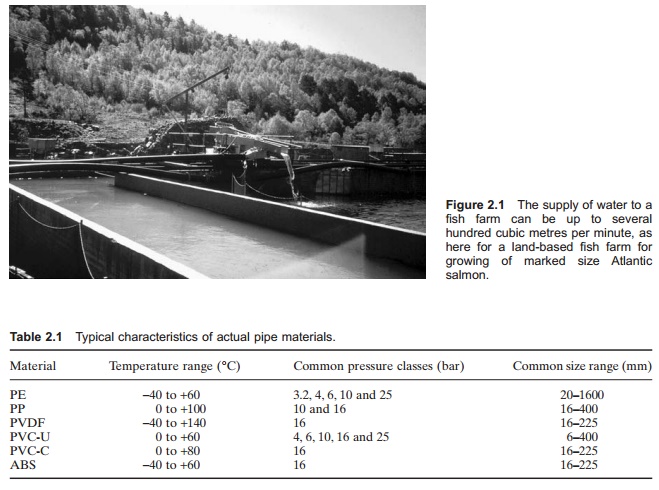 thermoplastic is hardening plastic, such as fibreglass which is made of different materials that are hard-ened; afterwards it is impossible to change its shape, even by heating. Fibreglass can be used in special critical pipes and pipe parts, but only in special cases (see below).

It is also important that materials used for pipes are non-toxic for fish.11 Copper, much used in piping inside houses, is an example of a commonly used material that is not recommended for fish farming because of its toxicity. In the past steel, con-crete or iron pipes were commonly used, but today these materials are seldom chosen because of their price, duration and laying costs.

PE pipes are of low weight, simple to handle, have high impact resistance and good abrasion resistance. Nevertheless, these pipes may be vul-nerable to water hammer (see later) or vacuum effects. PE pipes are delivered in a wide variety ofdimensions and pressure classes; they are normally black or grey but other colours are also used. Small diameter pipes may be delivered in coils, while larger sizes are straight, with lengths commonly between 3 and 6 m. PE may be used for both inlet and outlet pipes. PE piping must be fused together for connection; if flanges are fused to the pipe fit-tings, pipes may be screwed together.

PVC is used in pipes and pipe parts inside the fish farm and also in outlet systems. This material is of low density and easy to handle. Pipe and parts are simple to join together with a special solvent cementing glue. A cleaning liquid dissolves the surface and makes gluing possible. There are a large variety of pipe sizes and pipe parts available. When using this kind of piping, attention must be given to the temperature: below 0°C this material becomes brittle and will break easily. PVC is also recom-mended for use at temperatures above 40°C. PVC

is also vulnerable to water hammer. There are ques-tions concerning the use of PVC materials because poisonous gases are emitted during burning of left-over material.

Fibreglass may be used in special cases, for example in very large pipes (usually over 1 m in diameter). The material is built in two or three layers: a layer of polyester that functions like a glue; a layer with a fibreglass mat that acts as reinforce-ment; and quartz or sand. The ratio between these components may vary with the pressure and stiff-ness needed for the pipe. A pipe is normally con-structed with several layers of fibreglass and polyester. Fibreglass has the advantages that it tol-erates low temperatures, is very durable and may be constructed so thick that it can tolerate water hammer and vacuum effects. The disadvantage is the low diversity of pipes and pipe parts available. For joining of parts, the only possibilities are to con-struct sockets on site using layers of polyester and fibreglass, or pipes equipped with flanges by the manufacturer can be screwed together with a gasket in between.

At present, materials such as polypropylene (PP), acrylonitrile–butadiene–styrene (ABS) and polyvinyl difluoride (PVDF) have also been intro-duced for use in the aquaculture industry, but to minor degree and for special purposes. They are also more expensive than PE and PVC.

Each pipe and pipe part must be thick enough to tolerate the pressure of water flowing through the system. To install the correct pipes it is there-fore important to know the pressure of the water that will flow through them. The pressure (PN) class indicates the maximum pressure that the pipes and pipe parts can tolerate. The pressure class is given in bar (1 bar = 10 m water column (mH2O) = 98 100 Pa); for instance, a PN4 pipe will tolerate 4 bar or a 40 m water column. This means that if the pressure inside the pipe exceeds 4 bar the pipe may split. In fish farming pressure classes PN4, PN6 and PN10 are commonly used. Pipes of different PN classes vary regarding wall thickness: higher pressure requires thicker pipe walls. Pipes of higher PN class will of course cost more, because more material is required to make them.

A complete inlet pipe from the source to thefacility may be constructed with pipes of different PN classes. If, for instance, the water source to a fish farm is a lake located 100 m in height above the farm, a PN4 pipe can be used for the first 40 m drop, then a PN6 pipe for the following 20 m drop, and on the final 40 m drop a PN10 pipe is used.

Some problems related to pressure class are as follows:

Water hammer: Water hammer can occur, forinstance, when a valve in a long pipe filled with much water is closed rapidly. This will generate high local pressure in the end of the pipe, close to the valve, from the moving mass of water inside the pipeline that needs some time to stop. The result is that the pipe can ‘blow’. Rapid closing of valves must therefore be avoided. Water hammer may also occur with rapid starting and stopping of pumps. This can, however, be difficult to inhibit and it may be necessary to use special equipment to damp the water hammer effect. A tank with low pressure air may be added to the pipe system: if there is water hammer in the pipes the air in this tank will be com-pressed and this reduces the total hammer effect in the system.

Vacuum:A vacuum may be generated in a sectionof pipe, for example when it is laid at different heights (over a crest) and then functions as a siphon (Fig. 2.2). A vacuum may then occur on the top crest. It is recommended that such conditions be avoided, because the pipeline may become deformed and collapse because of the vacuum. Pipes are normally not certified for vacuum effects; however, if vacuum effects are possible, it is rec-ommended that a pipe of higher pressure class is used in the part where the vacuum may occur. By using pipes with thicker walls, higher tolerance to vacuum effects is achieved; alternatively, a fibre-glass pipe which tolerates a higher vacuum could be employed. 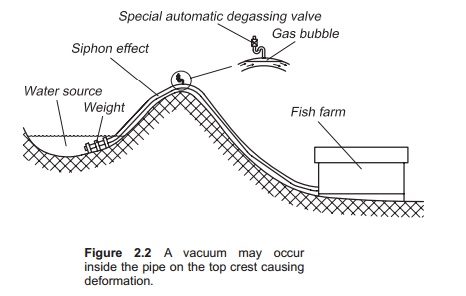 All pipes and pipe parts must be marked clearly. For pipes the marking print on the pipe is normally every metre, and for pipe parts there is a mark on every part. The following is included in the standard-ized marking: pipe material, pressure class, external diameter, wall thickness, producer and the time when the pipe was produced. It is important to use standardized pipe parts when planning fish farms.