All transport of water through a pipe or a channel between two points results in an energy loss (head loss).

All transport of water through a pipe or a channel between two points results in an energy loss (head loss). This is caused by friction between the water molecules and the surroundings. In all pipe parts where there is a change in the water direction (bends) or narrow passage (valves) additional friction will occur; this will also increase the head loss. Inside a pipe there is a velocity gradient, with the highest water velocity in middle of the pipe and the lowest close to the pipe walls because friction is highest against and close to the wall. In addition to friction loss against the wall there will be friction between the water molecules because their veloci-ties are not equal.

The amount of energy in water is constant (Bernoulli equation) if during passage no energy is supplied to or extracted from it. When friction occurs, the energy in the water is transformed into another form of energy, normally heat. This is very difficult to perceive with the large amounts of water that are common in aquaculture, since much energy is required to heat the water. However, in a thin pipe with a large amount of water passing through at very high pressure, it is possible to observe heating of the water.

As a result of frictional losses when flowing through a pipeline, the energy of the water must be higher at the beginning (inlet) than at the end (outlet); energy lines can be used to illustrate this. If the water is pumped, the pump pressure must overcome these frictional energy losses in addition to the pump height.

The energy loss (hm) due to friction through a pipeline may be calculated using the Darcy– Weisbach equation:

g  =acceleration due to gravity.

The friction coefficient depends on the pipe surface; this is normally called the roughness of the pipe. Relative roughness (r) is defined as the rela-tion between the absolute roughness (e) and the diameter (d) of the pipe, r=e/d (Fig. 2.8). High 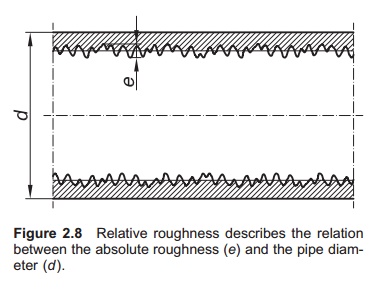 relative roughness gives high friction. The amount of friction depends on the pipe material, the con-nection method and the age of the pipe. For example, a new plastic pipe will have a lower fric-tion coefficient than an old pipe. The fouling that occurs in pipes that have been in use for some time will increase the roughness of the pipe. The f value for the pipe is given by the manufacturer and for PE or PVC pipes normally ranges from 0.025 to 0.035. For new pipes the value is lower, but when doing calculations values for old pipes must be used.

The friction coefficient also depends on flow type. The flow pattern can be divided into laminar and turbulent. The frictional losses are much higher with turbulent flow. This will always be the case in pipes used in aquaculture, because the water velocity is so high. Laminar flow may occur in open channels with low water velocity. The Reynolds number 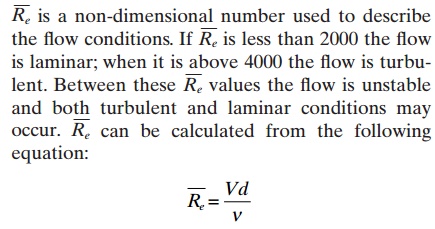 The temperature is 20°C. Calculate the Reynolds number.

This clearly illustrates that the water flow in the pipe is in the turbulent area.

By calculating the Reynolds number and the rela-tive roughness of the pipe, the friction coefficient f, can be found from the Moody diagram (Fig. 2.9).

Computer programs and special diagrams (Fig. 2.10) are available for calculating the head loss caused by friction inside a pipe. It is important to be aware that these diagrams are specific for given pipes because the f- value of the actual pipe is used to construct them. 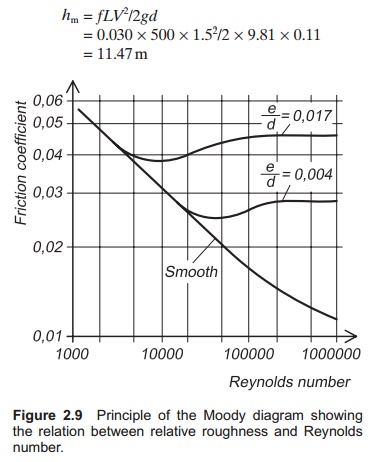 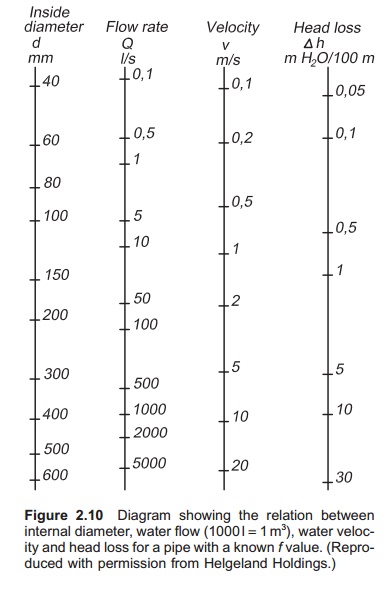 This means that the head loss in the water flowing through the pipeline is 11.47 m. If the water is to flow in the pipe, the intake pressure must be at least 11.47 mH2O in addition to atmospheric pressure; if it is less, the flow rate through the pipe will be reduced.