Several types of abnormal movement are recognized. Tremor con-sists of a rhythmic oscillatory movement around a joint and is best characterized by its relation to activity.

Several types of abnormal movement are recognized. Tremor con-sists of a rhythmic oscillatory movement around a joint and is best characterized by its relation to activity. Tremor at rest is character-istic of parkinsonism, when it is often associated with rigidity and an impairment of voluntary activity. Tremor may occur during maintenance of sustained posture (postural tremor) or during movement (intention tremor). A conspicuous postural tremor is the cardinal feature of benign essential or familial tremor. Intention tremor occurs in patients with a lesion of the brainstem or cerebellum, especially when the superior cerebellar peduncle is involved; it may also occur as a manifestation of toxicity from alcohol or certain other drugs.Chorea consists of irregular, unpredictable, involuntary musclejerks that occur in different parts of the body and impair voluntary activity. In some instances, the proximal muscles of the limbs are most severely affected, and because the abnormal movements are then particularly violent, the term ballismus has been used to describe them. Chorea may be hereditary or may occur as a com-plication of a number of general medical disorders and of therapy with certain drugs.Abnormal movements may be slow and writhing in character (athetosis) and in some instances are so sustained that they are more properly regarded as abnormal postures (dystonia). Athetosis or dystonia may occur with perinatal brain damage, with focal or generalized cerebral lesions, as an acute complication of certain drugs, as an accompaniment of diverse neurologic disorders, or as an isolated inherited phenomenon of uncertain cause known as idiopathic torsion dystonia or dystonia musculorum deformans. Various genetic loci have been reported (eg, 9q34, 8p21–q22, 18p, 1p36.32–p36.13, 14q22.1–q22.2, 19q13, Xq13) depending on the age of onset, mode of inheritance, and response to dop-aminergic therapy. The physiologic basis is uncertain, and treat-ment is unsatisfactory. 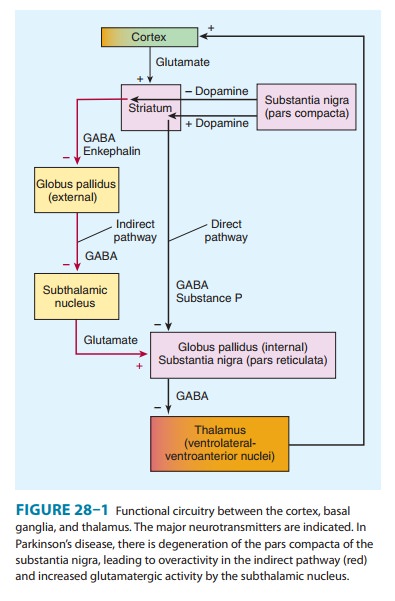 Tics are sudden coordinated abnormal movements that tend tooccur repetitively, particularly about the face and head, especially in children, and can be suppressed voluntarily for short periods of time. Common tics include repetitive sniffing or shoulder shrug-ging. Tics may be single or multiple and transient or chronic. Gilles de la Tourette’s syndrome is characterized by chronic mul-tiple tics; its pharmacologic management is discussed at the end. Many of the movement disorders have been attributed to dis-turbances of the basal ganglia. The basic circuitry of the basal ganglia involves three interacting neuronal loops that include the cortex and thalamus as well as the basal ganglia themselves (Figure 28–1). However, the precise function of these anatomic structures is not yet fully understood, and it is not possible to relate individual symptoms to involvement at specific sites.

A 64-year-old architect complains of left-hand tremor at rest, which interferes with his writing and drawing. He also notes a stooped posture, a tendency to drag his left leg when walking, and slight unsteadiness on turning. He remains independent in all activities of daily living. Examination reveals hypomimia (flat facies), hypophonia, a rest tremor of the left arm and leg, mild rigidity in all limbs, and impaired rapid alternating move-ments in the left limbs. Neurologic and general examinations are otherwise normal. What is the likely diagnosis and progno-sis, and how should his condition be managed?

The relation of the tremor to activity (rest tremor) in this case is characteristic of parkinsonism. Examination reveals the classic findings of Parkinson’s disease—rest tremor, rigidity, bradykinesia, and a gait disturbance; an asymmetry of the abnormalities is common in Parkinson’s disease. The prog-nosis is that symptoms will become more generalized with time. Pharmacologic treatment would involve a dopamine agonist (pramipexole or ropinirole) but may not need to be started now unless the patient is disturbed by his symptoms. Although the evidence is incomplete, rasagiline may slow disease progression and could also be introduced.