Dopamine does not cross the blood-brain barrier and if given into the peripheral circulation has no therapeutic effect in parkinsonism.

Dopamine does not cross the blood-brain barrier and if given into the peripheral circulation has no therapeutic effect in parkinsonism. However, (–)-3-(3,4-dihydroxyphenyl)-L-alanine (levodopa), the immediate metabolic precursor of dopamine, does enter the brain (via an L-amino acid transporter, LAT), where it is decarboxylated to dopamine (see Figure 6–5). 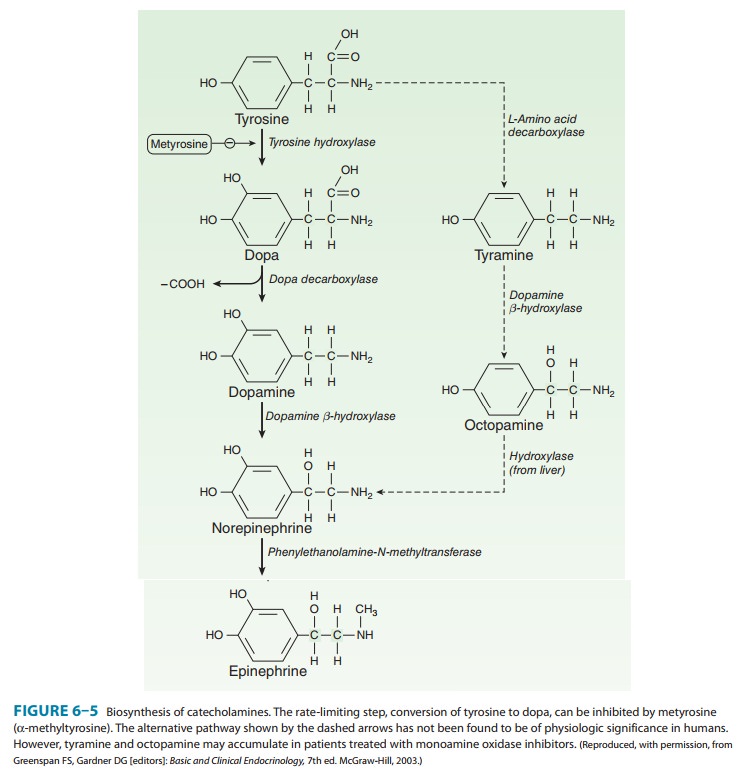 Several noncatecholamine dopamine receptor agonists have also been developed and may lead to clinical benefit, as discussed in the text that follows. Dopamine receptors of the D1 type are located in the pars compacta of the substantia nigra and presynaptically on striatal axons coming from cortical neurons and from dopaminergic cells in the substantia nigra. The D2 receptors are located postsynapti-cally on striatal neurons and presynaptically on axons in the sub-stantia nigra belonging to neurons in the basal ganglia. The benefits of dopaminergic antiparkinsonism drugs appear to depend mostly on stimulation of the D2 receptors. However, D1- receptor stimulation may also be required for maximal benefit and one of the newer drugs is D3 selective. Dopamine agonist or partial agonist ergot derivatives such as lergotrile and bromocrip-tine that are powerful stimulators of the D2 receptors have antipar-kinsonism properties, whereas certain dopamine blockers that are selective D2 antagonists can induce parkinsonism.

Dopa is the amino acid precursor of dopamine and norepineph-rine. Its structure is shown in Figure 28–3. Levodopa is the levorotatory stereoisomer of dopa. 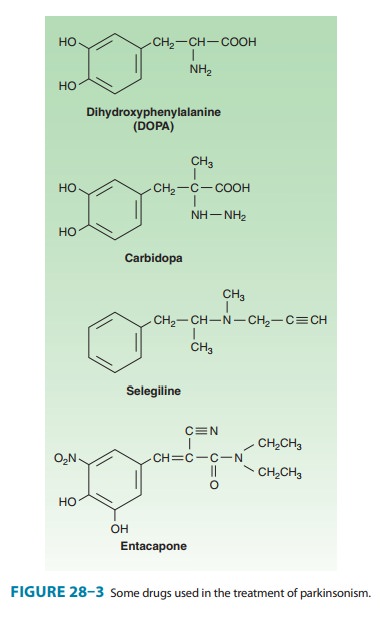 Levodopa is rapidly absorbed from the small intestine, but its absorption depends on the rate of gastric emptying and the pH of the gastric contents. Ingestion of food delays the appearance of levodopa in the plasma. Moreover, certain amino acids from ingested food can compete with the drug for absorption from the gut and for transport from the blood to the brain. Plasma concen-trations usually peak between 1 and 2 hours after an oral dose, and the plasma half-life is usually between 1 and 3 hours, although it varies considerably among individuals. About two thirds of the dose appears in the urine as metabolites within 8 hours of an oral dose, the main metabolic products being 3-methoxy-4-hydroxyphenyl acetic acid (homovanillic acid, HVA) and dihy-droxyphenylacetic acid (DOPAC). Unfortunately, only about 1–3% of administered levodopa actually enters the brain unal-tered; the remainder is metabolized extracerebrally, predominantly by decarboxylation to dopamine, which does not penetrate the blood-brain barrier. Accordingly, levodopa must be given in large amounts when used alone. However, when given in combination with a dopa decarboxylase inhibitor that does not penetrate the blood-brain barrier, the peripheral metabolism of levodopa is reduced, plasma levels of levodopa are higher, plasma half-life is longer, and more dopa is available for entry into the brain (Figure 28–4). Indeed, concomitant administration of a periph-eral dopa decarboxylase inhibitor such as carbidopa may reduce the daily requirements of levodopa by approximately 75%. 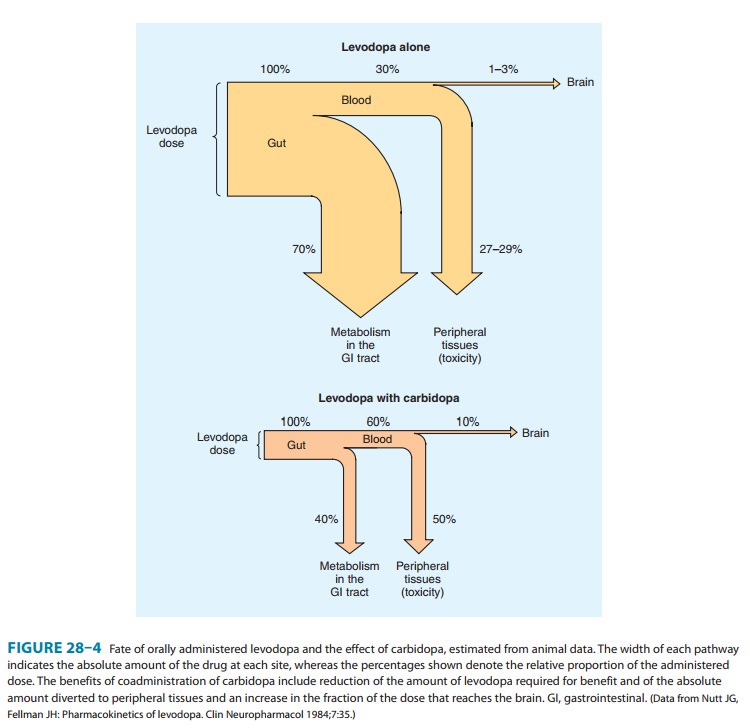 The best results of levodopa treatment are obtained in the first few years of treatment. This is sometimes because the daily dose of levodopa must be reduced over time to avoid adverse effects at doses that were well tolerated initially. Some patients become less responsive to levodopa, perhaps because of loss of dopaminergic nigrostriatal nerve terminals or some pathologic process directly involving striatal dopamine receptors. For such reasons, the benefits of levodopa treat-ment often begin to diminish after about 3 or 4 years of therapy, regardless of the initial therapeutic response. Although levodopa therapy does not stop the progression of parkinsonism, its early ini-tiation lowers the mortality rate. However, long-term therapy may lead to a number of problems in management such as the on-offphenomenon discussed below. The most appropriate time to intro-duce levodopa therapy must therefore be determined individually.

When levodopa is used, it is generally given in combination with carbidopa (Figure 28–3), a peripheral dopa decarboxylase inhibitor, which reduces peripheral conversion to dopamine. Combination treatment is started with a small dose, eg, carbi-dopa 25 mg, levodopa 100 mg three times daily, and gradually increased. It should be taken 30–60 minutes before meals. Most patients ultimately require carbidopa 25 mg, levodopa 250 mg three or four times daily. It is generally preferable to keep treat-ment with this agent at a low level (eg, carbidopa-levodopa 25/100 three times daily) when possible, and to use a dopamine agonist instead, to reduce the risk of development of responsefluctuations. A controlled-release formulation of carbidopa-levodopa is available and may be helpful in patients with estab-lished response fluctuations or as a means of reducing dosing frequency. A formulation of carbidopa-levodopa (10/100, 25/100, 25/250) that disintegrates in the mouth and is swal-lowed with the saliva (Parcopa) is now available commercially and is best taken about 1 hour before meals. The combination (Stalevo) of levodopa, carbidopa, and a catechol-O-methyltrans-ferase (COMT) inhibitor (entacapone) is discussed in a later section. Finally, therapy by intraduodenal infusion of levodopa-carbidopa appears to be safe and is superior to a number of oral combination therapies in patients with response fluctuations. This approach has been used to a greater extent in Europe than the USA, but interest is growing.

Levodopa can ameliorate all the clinical features of parkin-sonism, but it is particularly effective in relieving bradykinesia and any disabilities resulting from it. When it is first introduced, about one third of patients respond very well and one third less well. Most of the remainder either are unable to tolerate the medication or simply do not respond at all, especially if they do not have clas-sic Parkinson’s disease.

When levodopa is given without a peripheral decarboxylase inhibitor, anorexia and nausea and vomiting occur in about 80% of patients. These adverse effects can be minimized by taking the drug in divided doses, with or immediately after meals, and by increasing the total daily dose very slowly. Antacids taken 30–60 minutes before levodopa may also be beneficial. The vomiting has been attributed to stimulation of the chemoreceptor trigger zone located in the brainstem but outside the blood-brain barrier. Fortunately, tolerance to this emetic effect develops in many patients. Antiemetics such as phenothiazines should be avoided because they reduce the antiparkinsonism effects of levodopa and may exacerbate the disease.

When levodopa is given in combination with carbidopa, adverse gastrointestinal effects are much less frequent and trouble-some, occurring in less than 20% of cases, so that patients can tolerate proportionately higher doses.

A variety of cardiac arrhythmias have been described in patients receiving levodopa, including tachycardia, ventricular extrasysto-les and, rarely, atrial fibrillation. This effect has been attributed to increased catecholamine formation peripherally. The inci-dence of such arrhythmias is low, even in the presence of estab-lished cardiac disease, and may be reduced still further if the levodopa is taken in combination with a peripheral decarboxylase inhibitor.Postural hypotension is common, but often asymptomatic, and tends to diminish with continuing treatment. Hypertension may also occur, especially in the presence of nonselective monoamine oxidase inhibitors or sympathomimetics or when massive doses of levodopa are being taken.

A wide variety of adverse mental effects have been reported, including depression, anxiety, agitation, insomnia, somnolence, confusion, delusions, hallucinations, nightmares, euphoria, and other changes in mood or personality. Such adverse effects are more common in patients taking levodopa in combination with a decarboxylase inhibitor rather than levodopa alone, presumably because higher levels are reached in the brain. They may be pre-cipitated by intercurrent illness or operation. It may be necessary to reduce or withdraw the medication. Several atypical antipsy-chotic agents that have low affinity for dopamine D2 receptors (clozapine, olanzapine, quetiapine, and risperidone;) are now available and may be particularly helpful in counteracting such behavioral complications.

Dyskinesias occur in up to 80% of patients receiving levodopa therapy for more than 10 years. The character of dopa dyskinesias varies between patients but tends to remain constant in individual patients. Choreoathetosis of the face and distal extremities is the most common presentation. The development of dyskinesias is dose related, but there is considerable individual variation in the dose required to produce them.Certain fluctuations in clinical response to levodopa occur with increasing frequency as treatment continues. In some patients, these fluctuations relate to the timing of levodopa intake (wearing-off reactions or end-of-dose akinesia). In other instances, fluctuations in clinical state are unrelated to the timing of doses (on-off phenomenon). In the on-off phe-nomenon, off-periods of marked akinesia alternate over the course of a few hours with on-periods of improved mobility but often marked dyskinesia. For patients with severe off-periods who are unresponsive to other measures, subcutaneously injected apomorphine may provide temporary benefit. The phenomenon is most likely to occur in patients who responded well to treatment initially. The exact mechanism is unknown. The dyskinesias may relate to an unequal distribution of stri-atal dopamine. Dopaminergic denervation plus chronic pulsa-tile stimulation of dopamine receptors with levodopa has been associated with development of dyskinesias. A lower incidence of dyskinesias occurs when levodopa is administered continu-ously (eg, intraduodenally or intrajejunally), and with drug delivery systems that enable a more continuous delivery of dopaminergic medication.

Mydriasis may occur and may precipitate an attack of acute glaucoma in some patients. Other reported but rare adverse effects include various blood dyscrasias; a positive Coombs’ test with evidence of hemolysis; hot flushes; aggravation or pre-cipitation of gout; abnormalities of smell or taste; brownish discoloration of saliva, urine, or vaginal secretions; priapism; and mild—usually transient—elevations of blood urea nitro-gen and of serum transaminases, alkaline phosphatase, and bilirubin.

A drug holiday (discontinuance of the drug for 3–21 days) may temporarily improve responsiveness to levodopa and alleviate some of its adverse effects but is usually of little help in the man-agement of the on-off phenomenon. Furthermore, a drug holiday carries the risks of aspiration pneumonia, venous thrombosis, pulmonary embolism, and depression resulting from the immobil-ity accompanying severe parkinsonism. For these reasons and because of the temporary nature of any benefit, drug holidays are not recommended.

Pharmacologic doses of pyridoxine (vitamin B6) enhance the extracerebral metabolism of levodopa and may therefore prevent its therapeutic effect unless a peripheral decarboxylase inhibitor is also taken. Levodopa should not be given to patients taking monoamine oxidase A inhibitors or within 2 weeks of their dis-continuance because such a combination can lead to hypertensive crises.

Levodopa should not be given to psychotic patients because it may exacerbate the mental disturbance. It is also contraindicated in patients with angle-closure glaucoma, but those with chronic open-angle glaucoma may be given levodopa if intraocular pres-sure is well controlled and can be monitored. It is best given combined with carbidopa to patients with cardiac disease; even so, the risk of cardiac dysrhythmia is slight. Patients with active peptic ulcer must also be managed carefully, since gastrointestinal bleed-ing has occasionally occurred with levodopa. Because levodopa is a precursor of skin melanin and conceivably may activate malig-nant melanoma, it should be used with particular care in patients with a history of melanoma or with suspicious undiagnosed skin lesions; such patients should be monitored by a dermatologist regularly.