Inhibition of dopa decarboxylase is associated with compen-satory activation of other pathways of levodopa metabolism, especially catechol-O-methyltransferase (COMT), and this increases plasma levels of 3-O-methyldopa (3-OMD).

Inhibition of dopa decarboxylase is associated with compen-satory activation of other pathways of levodopa metabolism, especially catechol-O-methyltransferase (COMT), and this increases plasma levels of 3-O-methyldopa (3-OMD). Elevated levels of 3-OMD have been associated with a poor therapeutic response to levodopa, perhaps in part because 3-OMD com-petes with levodopa for an active carrier mechanism that gov-erns its transport across the intestinal mucosa and the blood-brain barrier. Selective COMT inhibitors such as tolcapone and entacapone also prolong the action of levodopa by diminishingits peripheral metabolism (Figure 28–5). Levodopa clearance is decreased, and relative bioavailability of levodopa is thus increased. Neither the time to reach peak concentration nor the maximal concentration of levodopa is increased. These agents may be helpful in patients receiving levodopa who have devel-oped response fluctuations—leading to a smoother response, more prolonged on-time, and the option of reducing total daily levodopa dose. Tolcapone and entacapone are both widely avail-able, but entacapone is generally preferred because it has not been associated with hepatotoxicity. 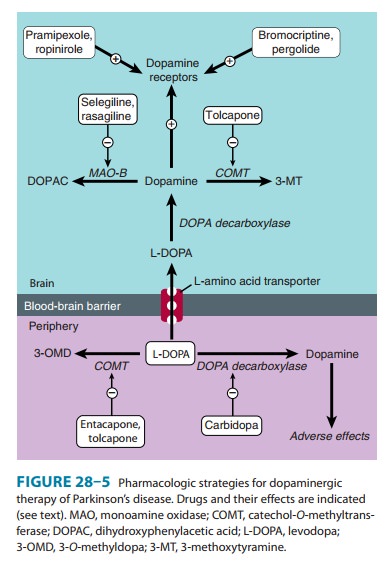 The pharmacologic effects of tolcapone and entacapone are similar, and both are rapidly absorbed, bound to plasma pro-teins, and metabolized before excretion. However, tolcapone has both central and peripheral effects, whereas the effect of entacapone is peripheral. The half-life of both drugs is approxi-mately 2 hours, but tolcapone is slightly more potent and has a longer duration of action. Tolcapone is taken in a standard dos-age of 100 mg three times daily; some patients require a daily dose of twice that amount. By contrast, entacapone (200 mg) needs to be taken with each dose of levodopa, up to five times daily.

Adverse effects of the COMT inhibitors relate in part to increased levodopa exposure and include dyskinesias, nausea, and confusion. It is often necessary to lower the daily dose of levodopa by about 30% in the first 48 hours to avoid or reverse such com-plications. Other adverse effects include diarrhea, abdominal pain, orthostatic hypotension, sleep disturbances, and an orange discol-oration of the urine. Tolcapone may cause an increase in liver enzyme levels and has been associated rarely with death from acute hepatic failure; accordingly, its use in the USA requires signed patient consent (as provided in the product labeling) plus moni-toring of liver function tests every 2 weeks during the first year and less frequently thereafter. No such toxicity has been reported with entacapone.

A commercial preparation named Stalevo consists of a com-bination of levodopa with both carbidopa and entacapone. It is available in three strengths: Stalevo 50 (50 mg levodopa plus 12.5 mg carbidopa and 200 mg entacapone), Stalevo 100 (100 mg, 25 mg, and 200 mg, respectively), and Stalevo 150 (150 mg, 37.5 mg, and 200 mg). Use of this preparation simplifies the drug regimen and requires the consumption of a lesser num-ber of tablets than otherwise. Stalevo is priced at or below the price of its individual components. The combination agent may provide greater symptomatic benefit than levodopa-carbidopa alone. However, despite the convenience of a single combina-tion preparation, use of Stalevo rather than levodopa-carbidopa has been associated with earlier occurrence and increased fre-quency of dyskinesia. An investigation as to whether the use of Stalevo is associated with an increased risk for cardiovascular events (myocardial infarction, stroke, cardiovascular death) is ongoing.