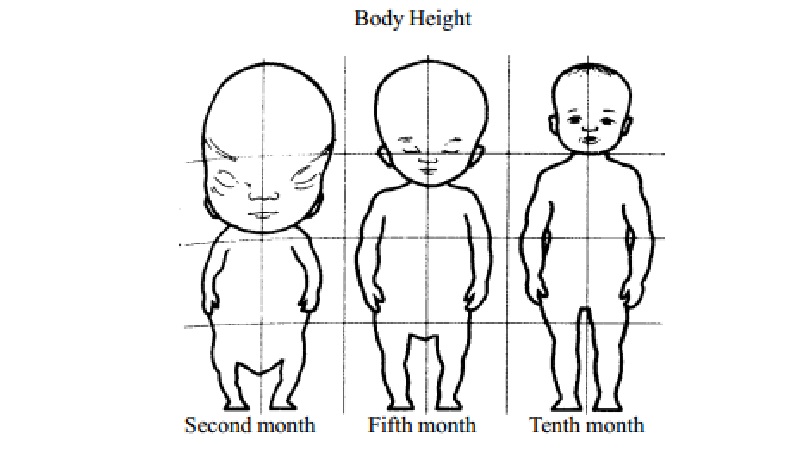 The prenatal period is ten lunar months of twenty eight days each in length or nine calendar months.

The prenatal period is ten lunar months of twenty eight days each in length or nine calendar months. This can vary from 180 to 334 days. Because prenatal development is orderly and predictable, it is possible to give a timetable of the important development taking place during this period. This period is divided into three stages.

Period of the Zygote (fertilization to end of second week)

The size of the zygote - that of a pinhead - remains unchanged because it has no outside source of nourishment; it is kept alive by yolk in the ovum.

As the zygote passes down the fallopian tube to the uterus, it divides many times and separates into an outer and an inner layer.

About ten days after fertilization, the zygote becomes implanted in the uterine wall.

The embryo develops into a miniature human being.

Major development occurs, in the head region first and in the extremities last.

All the essential features of the body, both external and internal, are established.

The embryo begins to turn in the uterus, and there is spontaneous movement of the limbs.

The placenta, the umbilical cord, and the amniotic sac develop; these protect and nourish the embryo.

At the end of the second prenatal month, the embryo weighs, on an average,33 gm (11/4 ounces ) and measures in length 11/2inches.

Changes occur in the actual or relative size of the parts already formed and in their functioning. No new features appear at this time.

By the end of the third lunar month, some internal organs are well enough developed to begin to function. Fetal heartbeat can be detected by about the fifteenth week.

By the end of the fifth lunar month, the different internal organs have assumed positions nearly like the ones they will have in the adult body.

Nerve cells, present from the third week, increase rapidly in number during the second, third, and fourth lunar months. Whether or not this rapid increase will continue and depend upon conditions within the mother's body such as malnutrition, which adversely affects nerve cell development - especially during the latter months of the prenatal period.

Fetal movements usually appear first between eighteen and twenty-two weeks and then increase rapidly up to the end of the ninth lunar month when they slow down because of crowding in the amniotic sac and pressure on the fetal brain as the fetus takes a head-down position in the pelvic region in preparation for birth. These fetal movements are of different kinds - rolling and kicking and short or quick movements.

By the end of the seventh lunar month, the fetus is well enough developed to survive, should it be born prematurely.

By the end of the eighth lunar month the fetal body is completely formed, though smaller than that of a normal, full-term infant.

Hazards during the prenatal period

At no other time during the life span are there more serious hazards to development or hazards of a more serious nature, than during the relatively short period before birth. These may be physical or psychological.