Pearl is a white, highly shining globular concretion found within the shell of an Oyster.

Pearl is a white, highly shining globular concretion found within the shell of an Oyster. Pearl oysters are sedentary animals. In India it was cultured for the first time in 1973 at Thoothukudi. Pearl oysters are found along the coast of Kanyakumari and in the Gulf of Kutch. High quality pearls are obtained from pearl oysters of Genus Pinctada that can be cultured in the salinity range of 30 ppt in racks, raft and long line methods. Freshwater bivalve Lamellidens is also used in artificial pearl culture. Mostly the pearl oysters inhabit the ridges of rocks or dead corals, forming extensive pearl banks. These pearl beds produce best quality of pearls called as “Lingha Pearl”.

When a foreign particle accidently enters into the space between mantle and shell of the oyster, it adheres to the mantle. The mantle epithelium encloses it like a sac and starts to secrete concentric layers of nacre around it as a defensive mechanism. Nacre is secreted continuously by the epithelial layer of the mantle and is deposited around the foreign particle and over a period time the formation of repeated layers of calcium carbonate makes the hard and glossy pearl.

When the pearl enlarges the oyster dies. The shell is then carefully opened and the pearls are manually separated and graded (Figure 13. 12). 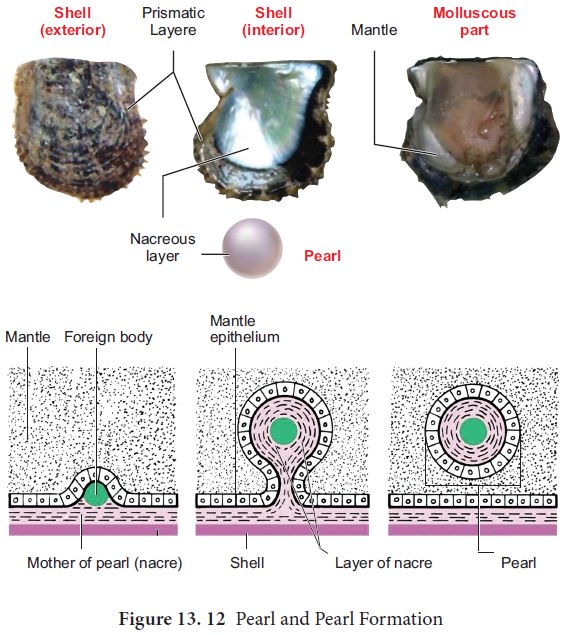 Programming of Pearl Industry and Artificial Insertion of Nucleus

This can be achieved by an artificial device to insert the nucleus as foreign particle in the shell of oyster has proved useful for the production of pearls in greater number.

i. Collection of oysters

Oysters are caught by special type of cages (84 x 54 x 20 cm) by covering a heavy wire frame with two centimeter wire mesh. This cage is dipped into a sand-cement mixture providing rough surface to the cages to which free swimming spat get easily stuck up. These cages are suspended at a depth of 6 meters. From July to November, where spats are easily available. These collected oysters are now transferred to rearing cages.

The collected oysters are stocked and reared in special type of cage called as rearing cage. These cages are well protected from enemies of oysters like Octopus, Eel, Devil fishes etc. The collected oysters are first cleaned and then placed into the culture cages for a period of about 10 to 20 days to recover from the strain due to excessive handling and for the physiological adjustment to the shallow water conditions.

In this method, a piece of mantle of living oyster is cut off and inserted together with a suitable nucleus inside the living tissue of another oyster. Following steps are taken for the insertion of nucleus.

a. Fitness of oyster for operation

b. Preparation of graft tissues

The piece of tissue which is inserted inside the mantle is called as ‘GRAFT’ tissue. The outer edges of these graft squares must be known because nacre secreting cells are found only on the outer surface of the mantle so it is essential to keep the outer surface in contact with the inserted nucleus.

Any small particle may function as nucleus to initiate the pearl formation but it is reported that calcareous nucleus is the best because the deposition of nacre was found to be more on calcarious nucleus.

For the insertion of nucleus, oysters are fixed in a desk clamp in the position of right valve facing upward. Mantle folds are smoothly touched to expose the foot and the main body mass, followed by an incision into the epithelium of the foot and a slender channel into the main mass one graft tissue which functions as a bed for the nucleus.

Nucleated oysters are placed into cages and suspended into sea water and attached with floating rafts to a depth of 2 to 3 metres for about 6 to 7 days to recover from the shocks due to operation. This period of 6 to 7 days is known as ‘Recovery period’. About 3000 to 3600 nucleated oysters are kept in different cages suspended in sea water at 2 to 3 meters depth for 3 to 6 years and undisturbed except at the time of clearing and inspection.

Pearls are harvested in the month of December to February which may slightly vary according to climatic conditions. After the completion of 3 years of the insertion of nucleus, pearl oysters are harvested from the sea and the pearls are taken out from the shell.

After taking out the pearls from the oysters shell they are washed properly, cleared with the soap solution.

The pearls obtained are of variable shapes and sizes. They may be white, or cream red or pink red in colour. The spherical pearls of rainbow colour are rarely found. The best quality of pearl is obtained from marine oysters. Pearl obtained from freshwater bivalves are not as valuable as those obtained from the marine oysters (Mishra, 1961).