Ever since the beginning of civilization, man has been trying to make use of organisms around him for various purposes and to rear them for increasing their number.

Ever since the beginning of civilization, man has been trying to make use of organisms around him for various purposes and to rear them for increasing their number. One of the finest discoveries is our knowledge regarding the procurement of honey collected by honey bees. Care and management of honey bees on a commercial scale for the production of honey is called Apiculture or Bee Keeping. The word ‘apiculture’ comes from the Latin word ’apis’ meaning bee. Bees are reared in apiaries that are areas where a lot of bee hives can be placed. There are five well recognized types of bees in the world. They are Apis dorsata (Rock bee), Apis florea (Little bee), Apis indica (Indian bee), Apis mellifera (European bee) and Apis adamsoni (African bee).

In honey bees, a highly organized division of labour is found. A well developed honey bee colony consists of the Queen, Drones and Workers (Figure 13.4). All the three types depend on each other for their existence. There is normally one queen, 10,000 to 30,000 workers and few hundred drones (male bees) in a colony.

Queen bee is a functional female bee present in each hive and feeds on Royal Jelly. Its sole function is to lay eggs throughout its life span. The virgin queen bee mates only once in her life. During the breeding season in winter, a unique flight takes place by the queen bee followed by several drones. This flight is called “nuptial flight”. The queen bee produces a hormonal chemical substance called pheromone. The drones in the area are attracted to the pheromone and mating takes place. During mating, the drone releases large number of sperms for sufficient fertilization. In a life span of two to four years, a queen bee lays about 15 lakh eggs. When the queen bee loses its capacity to lay eggs, another worker bee starts feeding on the Royal Jelly and develops into a new queen.

Among the honey bees, workers are sterile females and smallest but yet function as the main spring of the complicated machinery in the colony. Worker bee lives in a chamber called ‘Worker Cell’ and it takes about 21 days to develop from the egg to adult and its lifespan is about six weeks. Each worker has to perform different types of work in her life time. During the first half of her life, she becomes a nurse bee attending to indoor duties such as secretion of royal jelly, prepares bee-bread to feed the larvae, feeds the queen, takes care of the queen and drones, secretes bees wax, builds combs, cleans and fans the bee hive.

Then she becomes a soldier and guards the bee hive. In the second half her life lasting for three weeks, she searches and gathers the pollen, nectar, propolis and water.

The drone is the functional male member of the colony which develops from an unfertilized egg. It lives in a chamber called drone cell. Drones totally depend on workers for honey. The sole duty of the drone is to fertilize the virgin queen hence called “King of the colony”. During swarming (the process of leaving the colony by the queen with a large group of worker bees to form a new colony) the drones follows the queen, copulates and dies after copulation.

Structure of a Bee Hive

The house of honey bee is termed as bee hive or comb. The hive consists of hexagonal cells made up of wax secreted by the abdomen of worker bees arranged in opposite rows on a common base. These hives are found hanging vertically from the rocks, building or branches of trees (Figure.13.4). The young stages of honey bees accommodate the lower and central cells of the hive called the brood cells. In Apis dorsata, the brood cells are of similar in size and shape but in other species, brood cells are of three types viz., queen cell for queens, worker cell for workers and drone cells for drones (Figure.13.5). The cells are intended for storage of honey and pollen in the upper portion of the comb whereas the lower portions are for brood rearing. 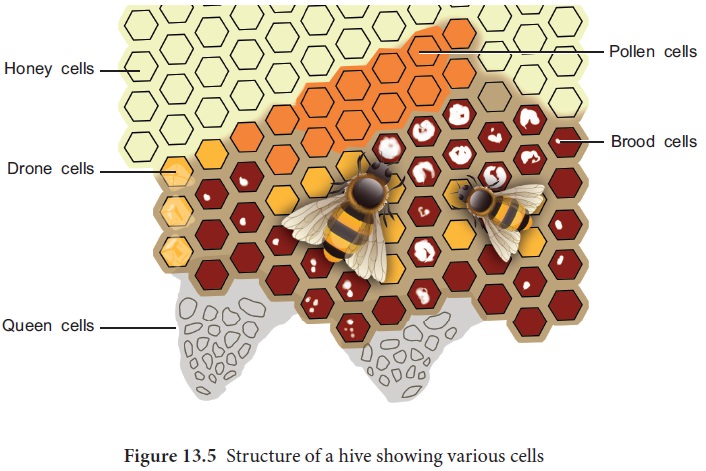 The main objective is to get more and more quality honey. There are two methods used by apiculturists. 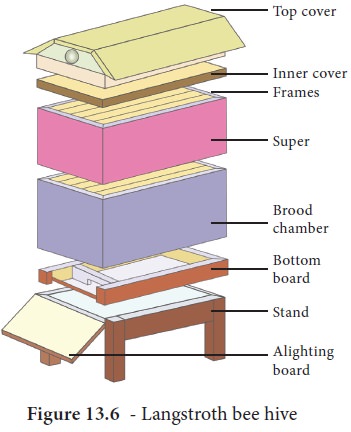 1) Stand is the basal part of the hive on which the hive is constructed. The stands are adjusted to make a slope for rain water to drain

2) Bottom board is situated above the stand and forms the proper base for the hive. It has two gates, one gate functions as an entrance while the other acts as an exit.

3) Brood chamber is the most important part of the hive. It is provided with 5 to 10 frames arranged one above the other through which the workers can easily pass. The frame is composed of wax sheet which is held in vertical position up by a couple of wires. Every sheet of wax is known as Comb Foundation. The comb foundation helps in obtaining a regular strong worker brood cell comb which can be used repeatedly.

4) Super is also a chamber without cover and base. It is provided with many frames containing comb foundation to provide additional space for expansion of the hive.

5) Inner cover is a wooden piece used for covering the super with many holes for proper ventilation. 6) Top cover is meant for protecting the colonies from rains. It is covered with a sheet which is plain and sloping.

Besides  the  above  primary  equipments,  other  accessory  equipments  are  used  in beekeeping Queen Excluder is utilized to prevent the entry of queen bee from the brood chamber into the super chamber. Comb foundation is a sheet of bee wax, on

both sides of which the exact shape of different cells of the comb is made in advance.

Bee gloves are used by bee keepers for protecting their hands while inspecting the hives. Bee veil is a device made of fine nettings to protect the bee -keeper from bee sting. Smoker is used to scare the bees during hive maintenance and honey collection by releasing smoke. Hive Tool is a flat, narrow and long piece of iron which helps in scraping excess propolis or wax from hive parts. Uncapping knife is a long knife which helps in removing the cap from the combs as a first step in honey extraction.

Bee brush is a large brush often employed to brush off bees from honey combs particularly at the time of extraction. Queen introducing cage is a pipe made of wire nets used for keeping the queen for about 24 hours for acquaintance with the hive and worker bees.

Feeder is a basin with sugar syrup covered by grass to feed the bees during drought season. The grass prevents the bees from sinking into the syrup. Honey Extractor is a stainless-steel device which spins the combs rapidly to extract honey. Hive Entrance Guard is a device similar to queen excluder in front of the hive entrance which prevents the escape of queen during warming season.

Products of bee keeping and their economic importance

The chief products of bee keeping industry are honey and bee wax.

Honey is the healthier substitute for sugar. The major constituents of honey are: levulose, dextrose, maltose, other sugars, enzymes, pigments, ash and water. It is an aromatic sweet material derived from nectar of plants. It is a natural food, the smell and taste depends upon the pollen taken by the honey bee. It is used as an antiseptic, laxative and as a sedative. It is generally used in Ayurvedic and Unani systems of medicine. It is also used in the preparation of cakes, breads and biscuits

Bee wax is secreted by the abdomen of the worker bees at the age of two weeks. The wax is masticated and mixed with the secretions of the cephalic glands to convert it into a plastic resinous substance. The resinous chemical substance present in the wax is called propolis which is derived from pollen grains. The pure wax is white in colour and the yellow colour is due to the presence of carotenoid pigments. It is used for making candles, water proofing materials, polishes for floors, furniture, appliances, leather and taps. It is also used for the production of comb foundation sheets in bee keeping and used in pharmaceutical industries.