The culture of lac insect using techniques for the procurement of lac on large scale is known as Lac culture.

The culture of lac insect using techniques for the procurement of lac on large scale is known as Lac culture. Lac is produced by the lac insect Tachardia lacca previously known as Laccifer lacca. It is a minute, resinous crawling scale insect which inserts its probosics into the plant tissues and sucks juice, grows and secretes lac from the hind end of the body as a protective covering for its body. Moreover the insect is a parasite on host plants i.e., Karanagalli (Acacia catechu), Karuvelai (Acacia nilotica) and Kumbadiri (Schleichera oleosa) . The quality of lac depends upon the quality of the host plant. The female lac insect is responsible for large scale production of lac, which is larger than the male lac insect. 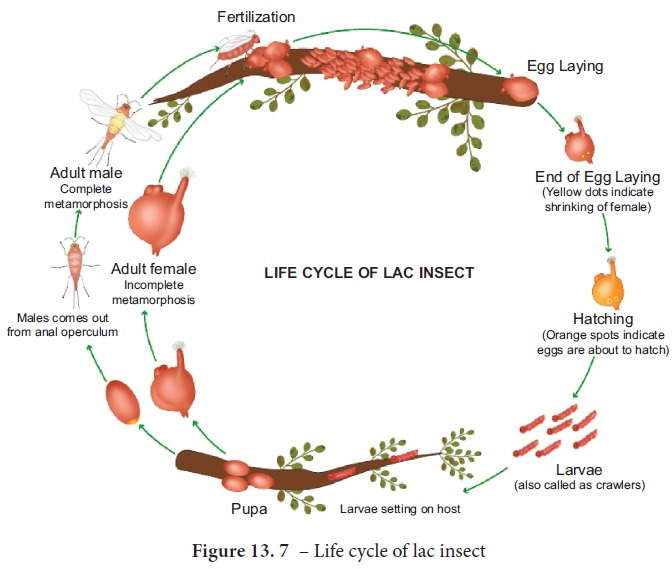 After copulation, the male insect dies. The female develops very rapidly after fertilization and lays about 200 to 500 eggs (Figure. 13. 7). Eggs hatch into larvae after six weeks. The mass emergence of larvae from the egg in search of a host plant is called ‘swarming’ . After settling on the host, the larvae start feeding continuously and the secretion of lac also starts simultaneously. Gradually the larvae become fully covered by lac. Then the larvae moult in their respective cells (chamber). The shapes of the cells are different for male and female insects, males are elongated whereas and the female are oval. Some insects are natural predators of lac insects. The caterpillars of these parasites feed upon lac insects showing hyper-parasitism.

·  Lac is largely used as a sealing wax and adhesive for optical instruments. It is used in electric industry, as it is a good insulator.

· It is used in preparations of shoe and leather polishes and as a protective coating of wood.

· It is used in laminating paper board, photographs, engraved materials and plastic moulded articles.

· Used as a filling material for gold ornaments